Here at OSNews we like to look at new, innovative products that push boundaries and create new markets. In the past year there were only 3-4 companies wordlwide that released video glasses (goggles) to accompany the exploding market of PMPs. MicroOptical is one of these pioneers and they kindly sent us in their MyVu video glasses to take them for a spin.The MyVu look a bit like high-tech sunglasses. On the inside part there are two 4:3 QVGA screens, mirrors and “windows” that allow you to see in front of you. Its shape is thin and this allows the user to be able to view above and below the actual device and because of this, it is possible to use the MyVu and at the same time walk in the park freely without fearing that you will stumble on a tree; although we won’t recommend wearing it while walking to a busy street. 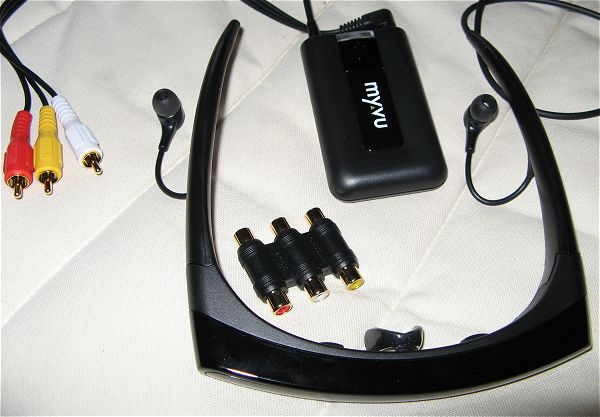 The box came with 3 different “nose” fitters, so you can attach the one that fits your nose best securing the glasses on your head. On the box we also found 3 AAA batteries (which delivered about 5.5 hours of video playback), the battery compartment and video-in accompanied device, and a case that fits both the battery pack and the iPod Video.

The way the MyVu works is this: The battery compartment connects to the video glasses while it also has an 3.5mm AV-IN jack that accepts several cables that attach on the other side on the A/V-OUT of the PMP, portable DVD player, camera, or other compatible AV device (including living room DVD players). By pressing the MyVu’s power button for 2 seconds it turns on the dual screens and it’s ready to watch. 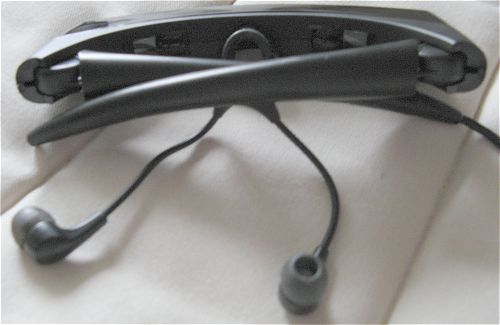 All this in theory of course, because by using the included 3.5mm-to-3.5mm A/V cable we had zero success with any of the PMPs and digicams we tried. Apparently MicroOptical does not use the same wire ordering on the 3.5mm jack (for audio left/right, ground and video) like most devices expect it to and so they are simply not compatible. The iPod Video works though with this cable, and this will please some people, but some other PMPs just won’t work. There is no way to know if your PMP will work or not without having both devices at hand to test first. I believe that MicroOptical should include all three kinds of 3.5mm AV jacks (in terms of wiring) in its box in order to eliminate compatibility problems.

We would not have been able to continue our review if MicroOptical was not kind enough to send us afterwards a standard AV cable: 3.5mm-to-Male_RCA. At last, a standard cable that it’s guaranteed to work! Hold off your horses though, as this cable is not available for purchase anywhere (and even if you find it, you won’t know if the 3.5mm wiring is the exact one that the MyVu expects). We spent over an hour at RadioShack and Frys last weekend to find this cable and we were unsuccessful, so we firmly believe that MicroOptical should put this second cable on all the retail boxes along with the adapter we had to purchase seperately in order to make the MyVu to work with our PMPs: a female-to-female 3-way RCA cable (we bought ours at Radioshack for $7, they call it the “triple phono plug coupler“). After we had this setup done, we were able to connect all of our PMPs to the MyVu and everything worked like a charm! Sure, the RCA AV cables are long and create miles of wiring, but it’s just more compatible than the 3.5mm-to-3.5mm solution.

The MyVu also has attached in it a pair of in-ear earbuds. Their sound quality is good for movies but crude for concerts where sound quality really matters. There is also a “zzzzzzz” buzz coming from the A/V cables at all times, similar to the buzz some CRT TVs do when they display ultra white colors. There is no 3.5mm output jack to use your own headphones.

Regarding picture quality, it feels like you are watching on a CRT. Even if the actual technology used is LCD, the internal mirror-like system makes the picture a bit fuzzy, like when you are watching a CRT. All things fair though, movies are very watchable and even subtitles are readable. MicroOptical claims that the MyVu simulates a 27″ TV from 2 meters away but I actually own a 27″ Sharp TV and I was able to compare side by side from 2 meters away. The MyVu is more like a 22″ or 23″ TV rather than a 27″ one. Still, better than a 2.5″ or 3.5″ screen that most PMPs have, although the difference is not big because PMPs are kept closer to the eyes than TVs are. The MyVu can display 60fps and 24bit color. It autodetects and autoadjusts to NTSC and PAL signals. 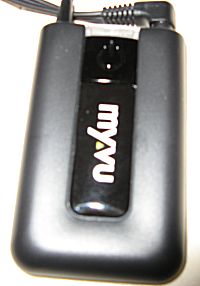 Regarding comfortability, I felt the part of my nose that kept the MyVu secure itching all the time. The device is not as comfortable as prescription glasses, although if you get used to them you will probably not notice the problem anymore and the fact that you can easily adjust them is a big plus. I personally need glasses for astigmatism but I was able to watch movies without ever feeling that I need to wear my glasses. Other eye conditions might not be the same though and so a prescription lens is sold as a snap-on add-on.

In conclusion, this is a product that could have been better if the product was tested with more devices and was offering more cables in the default packaging. Despite this though, I would like to congratulate MicroOptical for taking the big bold step to bring to the market a fresh, innovative and ultra-cool product. When the whole planet goes abuzz for an iPod Video with just a 2.5″ screen, MicroOptical takes that and brings it to the next level! I am sure that not only this kind of product will catch on, but we might even see Apple delivering something like this in the future. MicroOptical is here first though with this first-generation video glasses technology, offering it for the price of $250.

Let’s also note that they recently released a version of the MyVu that it’s made specifically for the iPod Video.