If you open up a dictionary (yes, the same Concise English Dictionary as last time), the term icon reveals four possible meanings; we can obviously discard the first and third option – it is option two and four we care about:

“icon n 1 (also ikon) a religious image, e.g. of Christ, the Virgin Mary, or a saint, typically painted on a small wooden panel and used as an aid to devotion in the Eastern Orthodox churches. 2 a pictorial representation; an image or symbol. 3 somebody who is an object of uncritical devotion; an idol. 4 in computing, a picture or symbol displayed on a screen to show a program option or a facility available to the user.”

The history of the computer icon dates back to Ivan Sutherland’s revolutionary computer program “Sketchpad”. Sketchpad was a sketching program with some extremely remarkable features, especially considering it was a Ph.D. project in 1963, running on a Lincoln TX-2 (every dot on the screen was created by “brute force” as Alan Kay describes it [part I | part II]). For instance, you could draw a “messy” shape, and make it “clean” by “tapping” the shape’s edges with a laser pen, and telling Sketchpad to make them mutually perpendicular and parallel (see the below image and this YouTube video). Sketchpad also introduced the concept of a master image and instances; you could work on one “master” image, switch to an “instance” (today, we would call it a different window), draw a new shape there, and import it into the master image. 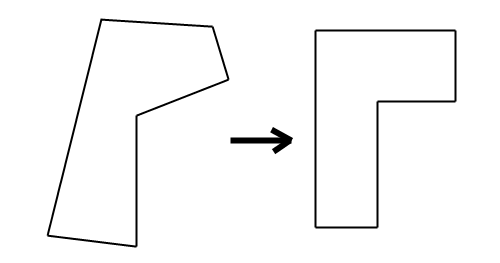 Even though Sketchpad itself did not include any icons in its interface, it is still important to mention it because it was the first computer program that actually had a need for icons in the first place; in those days, computers were mostly still massive mainframes that were run in batch mode, using punch cards and the like. That type of computing did not require abstractions like icons because this type of computing was done by highly educated scientists; Sketchpad was the first program that tried to lower the barrier-to-entry for using computers, allowing non-programmers and non-scientists to use a computer in a meaningful way. Consequently, it created the need to abstract computer operations so that normal people could use them.

To stick with my examples, Sketchpad had a need for icons describing the action “make these lines mutually perpendicular” and “import the shape in an instance”. Previous computer programs did not have such needs at all.

The next important milestone in the history of computer icons is the actual coining of the term “icon” by David Canfield Smith, in his Ph.D. work in 1973 at Stanford University. Smith was part of the Xerox Palo Alto Research Center’s team.

Which brings us to the Xerox Alto computer developed at Xerox PARC in 1973. Commonly seen as the father of the graphical user interface, this is one of the first graphical user interfaces which included actual icons, the best example being Draw, the paint program. It includes several icons on the screen that symbolise the actions the icons would start; exactly what Sketchpad lacked, but created a need for. 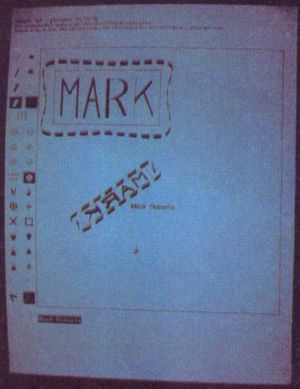 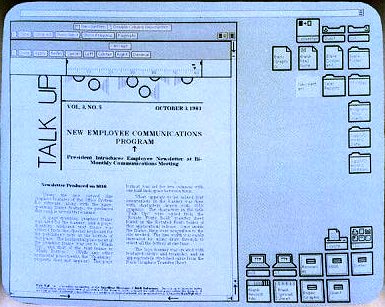 This metaphor also dictates how icons look today, and how they looked 25 years ago: they represent items found in an office (simply put). Even though icons of course got a lot more colourful and realistic over the past 25 years, they are still essentially the same as the icons in the Xerox Star, or, as seen below, the Apple Lisa.