Initially, I encountered an error on startup, “missing libtag.so.1”. I located, downloaded, and installed taglib-1.5-x86-gcc2-haiku-2009-07-15.zip. I tested all four operations: Edit, Name, Copy, and MPEG. Works as you expect.

I opened and closed BeAE with no issues. I checked and changed preferences. I loaded an MP3 file, manipulated, sampled, analyzed, and saved it. No problems so far.

I opened and closed BeShare. I established connections to servers. I queried and downloaded files; no issues. I also performed simultaneous downloads with BeZillaBrowser; again, no issues. On several occasions, particularly with large files (probably due to my slow connectivity to the server), I had to halt transfer and restart downloads. This software is dependable. 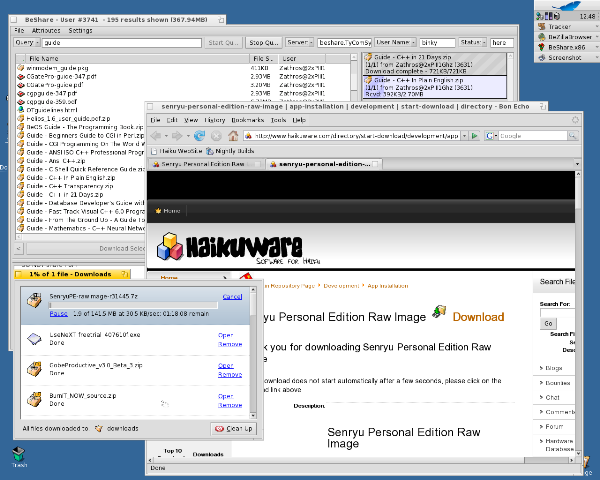 It installs; however, it just does not work!

Both Installed and worked. I am playing Alone In The Dark and Doom!

In my next attempt, I encountered the next error message: “Could not open “dosbox” (Missing libraries: libpthread.so)”. At this point, I was stuck – until I came across a posting at Bebits. I located and downloaded LibPak_FULL_user.zip; then, I extracted LibPak_libpthread_user.zip from the archive and installed libpthread.so.

Finally, success! Added DOSBoxGUI, and it works! Again, I am playing Alone In The Dark and Doom! 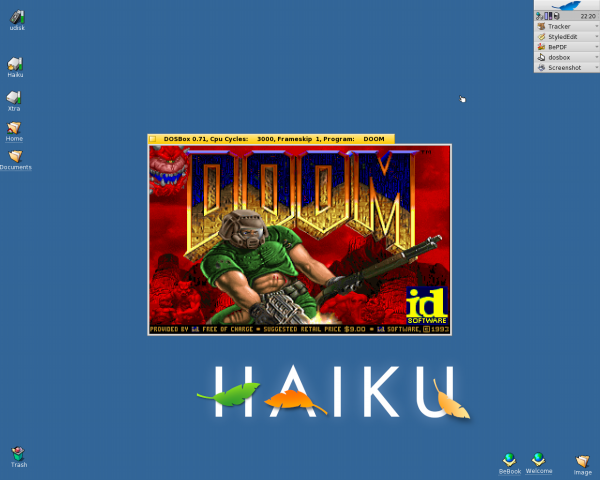 I could not get it to work. I received the error message: “missing symbol “ReadyToLoop_7BLooperPQ27BLooper10Loop_state”” on startup. I have no idea what any of this means, so I cannot do anything about it.

It opens and closes fine. Since I could not rip movies with DVDRip, I attempted to convert movies from the drive into mp4 files. For some DVDs, it would read the DVD and did not locate the main movie to convert to mp4; however, it listed the features to convert. On others, it simply provides the error message on the scan, “No valid title found”. It needs further testing. So far nothing productive.

Addendum: I ripped a movie using DVDFab in my Windows system. I transported the DVD files into the Haiku system. Handbrake readily saw the DVD directory, read all the titles, and I converted these ‘cleaned’ files into an MP4 file. So it works well. We need good DVD ripper software for Haiku. 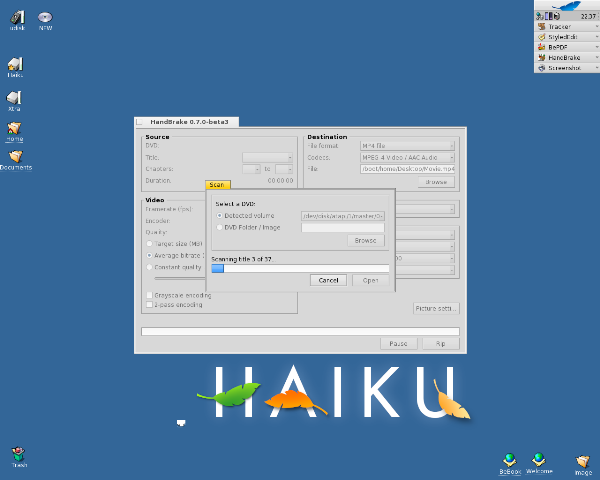 Opens, loads movie, and works great! A quick note on MediaPlayer – it works too!

It opens, loads, plays, saves, and closes as expected. It does lockup on some SMCs, and I’m not sure why. I played Wolfenstein3D and Zelda with no issues. I had one problem that locked up the game when the screen resolution changed by a miskey. It needs more testing to figure out what games are compatible on this platform. 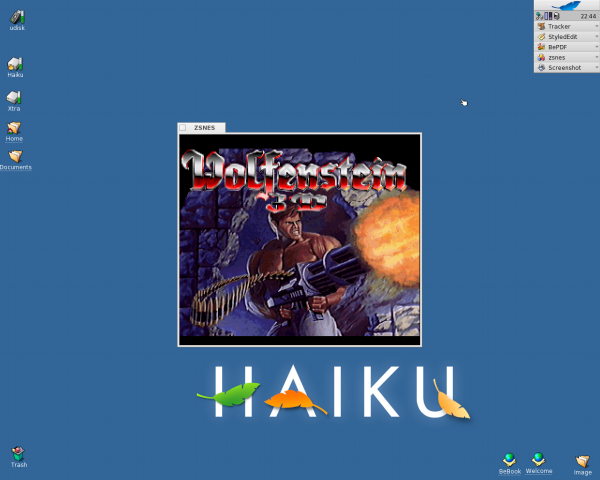 There is an annoying mishap that can occur when using ZSNES. When it happens, it causes “screen white-out” and displays the GDB information for the system error. If you are lucky, you can interface with GDB. Unfortunately, I have to force a reboot to reset the system. An example of the output is below: