On startup, I had to set the executable permissions; then, it crashed with the following report:

Again, this version of AbiWord crashes with the following:

Gobe works. I’m using it now for my stuff. 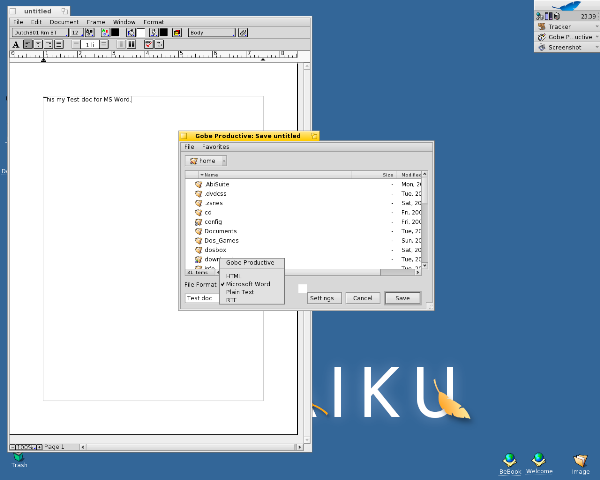 The software installs, displays options, and closes with no incidents. Unfortunately, Haiku is not recognizing my floppy drive in my system. Replaced and tested the drive…it works in DOS & Windows. I need floppy drive driver for Haiku to recognize the drive. Then, maybe the software will work as advertised.

For ImageMounter, the software fails with the following report:

For mountimage, it fails and reports the following message, “Could not open “mountimage” (Missing symbol: mount)”.

I guess it does not matter. If you double-click the image file, the image file automatically mounts onto the Desktop…a nice Haiku feature.

Started up with the following message, “Could not find cdrecord/mkisofs. You have to install them in /boot/home/config/bin…Okey”. So, I created two links for each and it started right up with no messages.

I started a new virtual CD, selected files into the Virtual CD, and I ensured the size of the CD by using the “Calc. Size” button. Then, I hit the “Burn!” button; after answering a prompt, it created an image of the virtual CD to burn. It proceeded to prompt me to “Put in a CDR/CDRW”, which I had not done. At which point, I loaded a CD in the CDRW drive, when it flashed on and then off. It said it was “Done!”. Of course, it did not burn the CD in 1 second. So, we have issues…needs more research.

Works right from the directory. This is still the best package builder for BeOS/Zeta/Haiku!

Well, what can I say? It works so far.

Almost forgot to mention my issues with this application. For most part, it is the best Internet interface we have when compared to FireFox. It clearly has better performance. However, it too can be sluggish or unresponsive. For most of my experiences using it, the “Unresponsive Script” errors/notifications really put a hamper on its speed. Like FireFox, it is also a CPU hog while it is working on transfers for WWW content to fill the page.

I used BeZillaBrowser for everything on the Internet. On Facebook, I played Mafia Wars and Caste Age. On using Castle Age, the only issue was I could not attack my dragon/monster using the “Attack” buttons – they do not get displayed. The “Call For Aid” button is also missing as well. I e-mailed using Yahoo! and Netscape; in addition, I downloaded many files. Not bad for Haiku.