That is until last week. I downloaded the CD image of Haiku Alpha Release 1. Then, I created a new system from spare parts for testing. My system specs are:

After getting the system built and ready, I installed DOS 7.1 and Haiku OS into my test platform. For the past seven days, I have intensely stressed the Haiku operating system and its applications. I downloaded and installed the software that I wanted to use in Haiku. 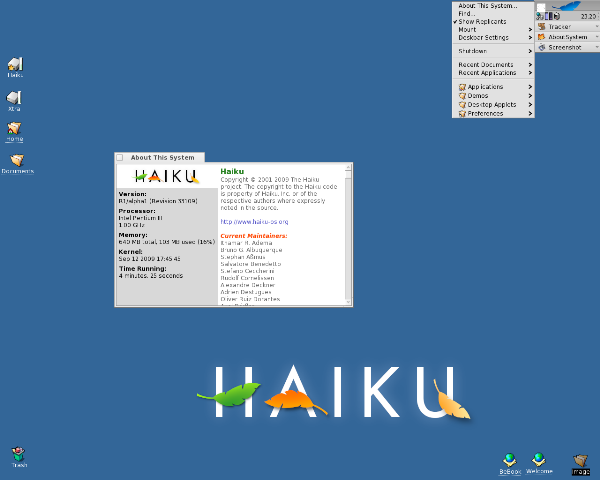 In the following descriptions, I will describe my adventures of downloading, installing, using/testing applications and software. But first, I will describe my overall perception of Haiku’s performance. The OS is responsive and generally well-behaved. I did encounter a few incidents when I went into Kernel Debugging Land on three separate occasions, all unrelated situations. I did have more encounters with GNU gdb 6.3 “sessions”, due to problematic installs or applications. This usually caused me to reboot to either clear the screen and/or reset the system. Other than that, I am generally pleased with Haiku in its Alpha version.

I needed networking capabilities and I soon discovered about the new WiFi driver for Haiku. I downloaded and installed the Wifi driver (atheros-rev308-r1alpha1.zip, from here) to drive the D-Link DWL-G510 [AR2413] card in my system. It is very surprising to see and experience WiFi on BeOS/Haiku… I got WiFi! 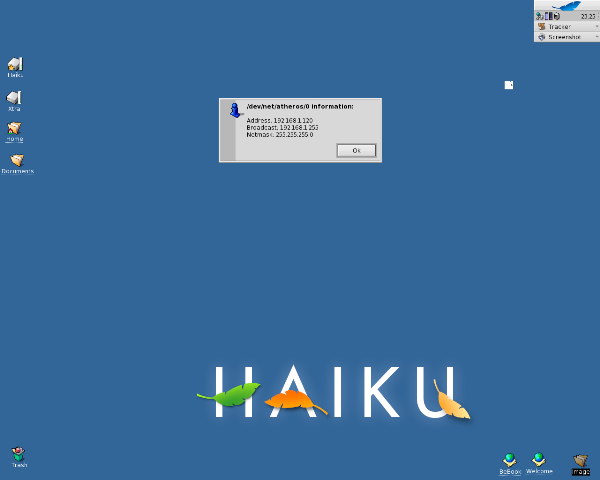 I e-mailed Mr. Colin GÃ¼nther about my success and forwarded him the systeminfo file from getsysteminfos.sh. Mr. GÃ¼nther stated, “I’m impressed too! Never stressed it that long and diverse.” I really appreciate the work he is doing to maintain and to update this driver. Kudos for his great work!

I tested USB 1.1 and 2.0 in my test system. I used my USB Dane-Elec 1Gb memory stick, Archos 20Gb drive, and Seagate FreeAgent 1Tb drive with some issues. I transferred many files of various sizes with no problems for most part. Using the USB 2.0 card in my system, I transferred many 1024 Mb files to stress the connection and the driver. Checked out good; however, Tracker’s performance dropped significantly while moving/copying files from the USB mounts to local directories. For example, while ongoing transfers were in progress, if you right-clicked an icon or the desktop, you simply waited for a response with an average of 5 to 30 seconds wait time. 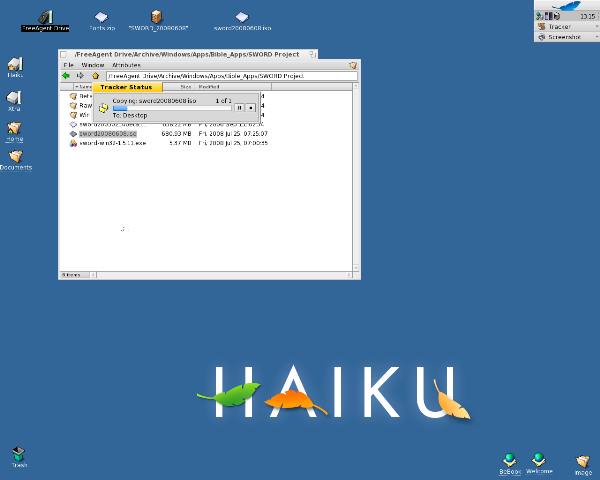 Another issue represents the moments when you attached an USB device, Haiku senses the device, due to the brief flash of the device LED, and then nothing. No automount activity occurs. I verified this also by checking the mount status of the device by using the right-click on the Desktop… The Mount menu displays nothing. I have to reboot the system to resolve this condition. It is most prevalent when the system has been idling overnight, multiple USB swaps, or when it has been “abused” by many files transfers. I receive no errors or any other indications of the USB driver/device failure, except when the Tracker Status window stalls. I believe once Haiku is released as Version 1.0 these issues will be resolved after the Dev Teams “tweak” Haiku.

On day 5, I installed a new update to the WiFi driver (atheros-rev315-r1alpha1.zip). I tested the WiFi driver just as hard as the previous version. I encountered no problems using this version of the Atheros driver. It works great.

During most of my testing time, I was locating, checking, and downloading software for Haiku. The following is my experiences for the past seven days in my attempts to install, test, and use software in Haiku.