Geeks.com were very generous sending us over their SupportPlus SP-PMP51C (aka Sorell SV-10) portable media player for a review. This PMP is unique because among extended media features (20GB, A/V playback/rec, line-in, fm radio/rec, voice rec, text viewer, OGG support, lots of accessories) it also includes a 1.3MP swivel camera (with VGA video recording) selling at the fair price of $199 (use the promo code “GEEKPLUS” to buy the item for just $149).

One thing that surprised us positively from the first moment we unboxed the product was its vast array of standards and accessories: stereo earphones, a USB connection cable, a carrying case, a wrist wrap, a European and a US power adapter, a nice cradle, an A/V RCA cable and an audio-in Y cable. We also found 3 CDs worth of video software and a manual in… Dutch and German. Download the English manual in PDF from here. 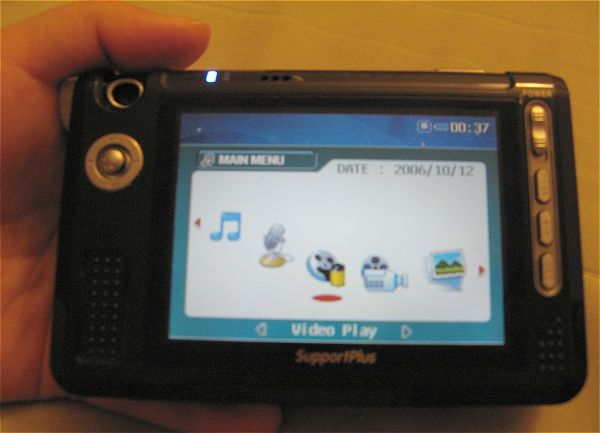 Another nice surprise was the small size of the PMP, as it’s using the smaller size hard drives (Toshiba, 20 GB). Think of this PMP as having the same size as most classic iPaq PDAs. SupportPlus is advertising that the screen of their PMP is VGA, but this is incorrect information, the 3.5″ screen is actually QVGA (320×240), albeit very bright and with strong colors. On the front of the PMP you will find the Power on/off/lcd-off slider button, the menu button, the A->B button and the OSD button. On the left side of the PDA you will find a joystick which fast forwards/backwards on long press and moves to the next item in the folder list when short pressed right or left. When pressed up and down it changes the volume. There are LED indications for charging and battery or when the LCD is off but the PMP is ON , while next to these LEDs you will find its microphone.

On the back of the PMP you will find a wrist wrap hole, a “hold” button (which is not very solid and it can easily change state all by itself inside your bag or pocket) and a soft-reset hole. The battery is not user-removable, although with the right screwdriver is not an difficult job to do so. We loved the cradle that comes with the PMP, it makes it look good and easier to watch video on it, as the cradle tilts the LCD backwards. There is no kickstand unfortunately, but the PMP is able to stay steady horizontally as its bottom is completely flat. On the left side of the PMP you will find the Line-In and the Line-Out 3.5mm jacks, while on the right side you will find the headphones-out jack, the standard mini-USB 2.0 port and its A/C power jack. The PMP comes with stereo speakers, in case you don’t want to use earbuds. The power cable is long and it uses the same two-part standard adapter that comes with some laptops (e.g. IBM’s), so if you travel you won’t have to take both adapters with you. 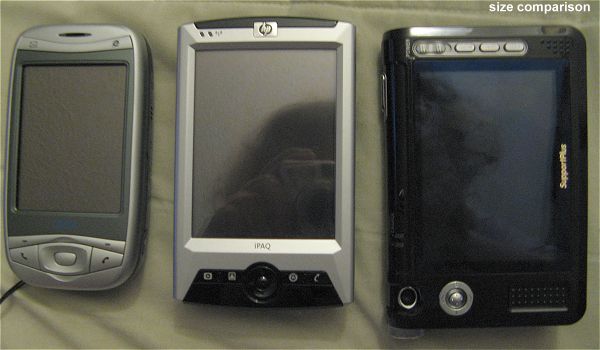 The PMP runs a custom operating system and boots in about 4 seconds and turns off in 4 seconds too. It is a very stable product. It came with a branded by SupportPlus 1.19A Sorell firmware version, which is pretty old. SupportPlus does not support this product anymore (they don’t reply to support questions either) and so we decided to download the manufacturer’s generic firmware to enable the better battery life, experimental XviD support, automatic FM scanning, OGG support, Text Viewer application etc. You can download the latest v2.26 firmware file from here: then fully charge your PMP, unzip the firmware file, copy it on the PMP’s /Data folder and then remove the USB cable. That’s it, 1 minute later you will be basically running a Sorell product (the SV-10), and not a SupportPlus one anymore. While this will void your warranty, it’s an upgrade worth doing for most users.

The user interface and hardware button choices could definitely do with some clean up. It’s pretty difficult to operate the PMP. Buttons have different meanings depending in which application you are in and in which mode you are each time. It’s just confusing even after having read the manual, too much to remember. Exiting an application for example (e.g. the audio player) it is not enough to short or long press the menu button. You have to long press the play button and then press the menu button twice! On the Video Player application you only need to press the menu button once. On the other applications you only need to press the menu button once and not long-press the play button. Usability is just a mess, it is obvious that Sorell did not do enough research on it (kind of reminds me why Apple is No1 with its iPod). However, the interface is really fast, one of the fastest I have seen on any PMP. On the main screen you can select between audio or video playback, image viewing, video recording, audio recording, image capturing, FM radio, Text Viewer, Time Settings and System Settings. On the System Settings you can change the TV format, language (about 15 languages are supported, including Dutch and Greek), settings for automatic power/lcd off, LCD backlight (we found 2/10 pretty bright indoors) and more. While on a “file mode” you can delete files using a combination of keys. 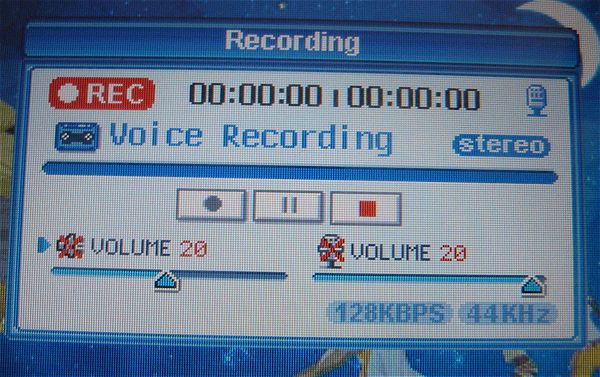 Regarding audio recording and video recording you can select the source each time (e.g. Camera or Line-In for video recording and internal-mic or line-in for audio recording). The audio recording is always done in 128 kbps but at only 32 khz. The 1.3MP swivel camera can be rotated in order to snap/record either the shooter or the surroundings. There is a “record” button on the top of the PMP which starts recording on a single press, pauses on a second one, continues recording from where it was left on a third one and stops recording completely on a long press. The camera can snap QVGA, VGA and SXGA .jpg pictures, view up to 4000x3000pix jpeg pictures while it can record in 15fps VGA and 30 fps QVGA. There are a number of effects available (e.g. sepia, monochrome etc) and digital zooming is available in QVGA mode. The video recorded (also when recording via the A/V-in port) is in a ASF format (mp3 audio with 128kbps, 44100sps, video encoded with ISO MPEG-4, V1). It is not very good in compressing the recorded files (which is normal for the CPU power available) as it yielded 2.27 Mbps for a QVGA video recording (or, 1 GB per 45 minutes of VGA recording). We found the camera still-snapshot quality similar to most 1.3MP cellphone cameras (with some over-exposing deficiencies), but the video recording quality (VGA or QVGA) is much better than on most cellphones (with some exception of the Nokia N9x series).

The FM radio requires headphones plugged-in in order to work (they work as an FM antenna), although you can enable the external speaker if you don’t want to wear earbuds (and use the earbuds only as an antenna and not as audio output). By long-pressing the OSD button the PMP goes into “preset” mode and then by long-pressing the joystick towards the right side it automatically scans and saves radio stations channels. Reception is not too bad (it automatically found and stored 16 radio stations in my area). Then, by short-pressing the joystick towards the right side it will just jump to the next preset. If you press the Record button it will record the FM stream as an 128 kbps mp3 (but at only 32KHz). You can pause and continue recording and it will all get saved as a single mp3. By slightly pressing down the Power on/off slider button it will turn off the LCD so you can listen to FM Radio without wasting battery life needlessly. The SV-10 is able to support all three kinds of FM radio bands (USA, Europe and Japan). 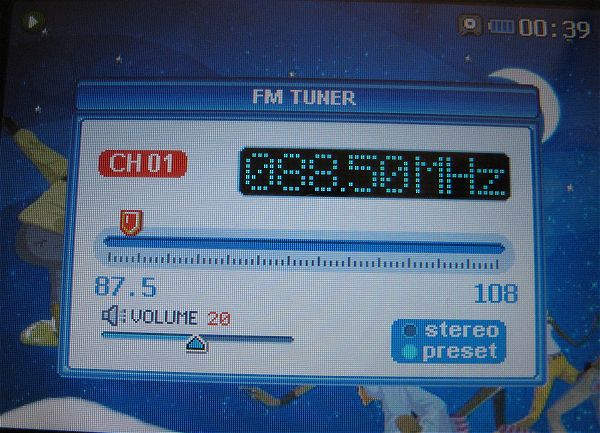 The audio support of the unit is pretty good, I found the sound quality very good. There is EQ support (preset and user-definable). It’s a bit boring if you have a huge list of music to wait for the hdd to wake up and do a quick read of the disk each time, but sound quality will pay you back. There is no mp3 tag support (there is an option for ID3 but it doesn’t seem to work) but the SV-10 is able to drive headphones pretty loud (as I am writing this I have the volume to 15 out of 40 scale and using my MDR-XD400 Sony headphones and the SV-10 is still able to produce loud music). There is lyrics support, shuffle, repeat and ability to put your LCD to sleep after XX number of minutes. You can also setup an A->B portion of a song that will continuously play over and over again. There is also a facility for “bookmarks” and “favorites” but using those is pretty tricky because of the quirky interface discussed above. There is no support for playlists other than creating folders with specific songs in them or using the “favorites” feature. 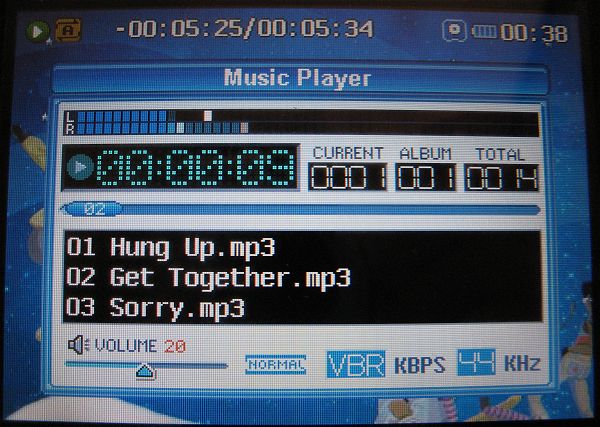 The SP-PMP51C supports a number of media formats: AVI, DivX, XviD (experiemental, some XviD videos we tried failed), MP3 (with VBR support), WMA (non-VBR), OGG, JPEG, BMP and GIF. According to the manufacturer it supports Divx (v3.x,4.x,5.x) and XviD with mp3 audio encoding up to 720×480 (DVD quality). It only supports one kind of ASF: mp3 audio CBR with its video encoded in ISO MPEG-4 V1. In essense, the only popular video format endorsed for playback is DivX, but we wish it was that simple. Unfortunately, the codec they use does not support well mp3 VBR decoding, and this results in out-of-sync A/V playback. Only CBR DivX files play well and the problem is that 95% of the DivX (or XDiv) videos out there use VBR instead of CBR. You will have to use this or this (complicated) tips to transform your existing DivX VBR files to the expected audio format and for any new DivX encoding you are producing you will have to use either Mencoder or ffmpegX and specifically tell them to use CBR and DivX (instead of XviD). Windows users should use the SUPER free encoder and select the same settings as shown in my screenshot here (avi, divx, mp3, mencoder, 320×240, 4:3 (or 16:9), 30, 720, 44100, 64kbps). After encoding such a video file it plays fine. You can change the screen format to 4:3 or 16:9, go fullscreen, define bookmarks within a video or create a playlist with favorite videos, define A->B points, repeat whole videos, fast forward/backwards really fast on them (sometimes a bit too fast ;-). 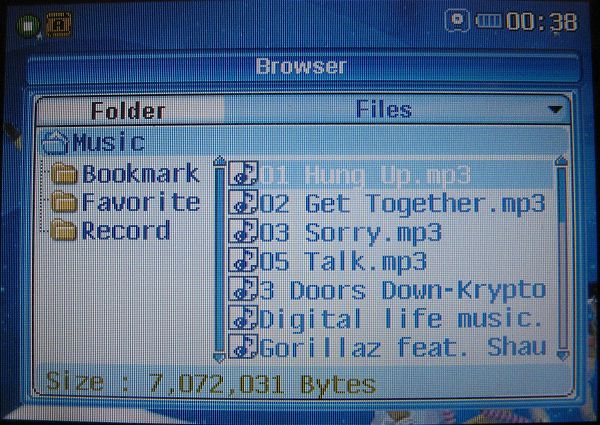 The Image slideshow application is pretty good. It has transitioning effects, zooming support (using the… A->B button), repeat, shuffle, slideshow timing settings and rotating pictures in XX degrees or Auto (“auto” doesn’t work very well, as it doesn’t keep the aspect rations). Finally, by placing a .txt file on the /data folder you will be able to view it and use your PMP as a screen reader (and listen to music at the same time).

In conclusion this is one of the most full-featured PMPs ever released, but the A/V out-of-sync problem on most DivX videos is a major one. This is a lot like buying a microwave without a timer. I don’t understand why the Sorell engineers never found the problem, it seems to me that they only tested their product with a single encoder. Nevertheless, if you only going to use this PMP for recording, and encode all DivX videos yourself using the “SUPER” encoder, then this is an amazing value at $199 (use the promo code “GEEKPLUS” to buy the item for just $149). It has so many features and accessories that for the price it becomes unbeatable.