Our friends over at Hi-Mobile sent us in for a review two items this last week: the velerable LG Chocolate KG800 and an add-on camera flash accessory for Sony Ericsson fast-port phones. Check in for more.

The LG KG800 is a triband slider phone. It is very small, lite (83 gr) and it feels really nice and solid in the user’s hands. It comes with Bluetooth 1.2 (transfer rate maxed out at 30 KB/sec), an 1.3 MP camera with flash, 128 MB internal memory partitioned (some is in the phone’s file system and the rest is using FAT for the mp3 partition) and an 176×220 screen. The main feature that sets it apart from other phones is its touch-sensitive navigation keys with backlights. The phone does not have EDGE or a card slot, and yet it’s marketed as a music phone. 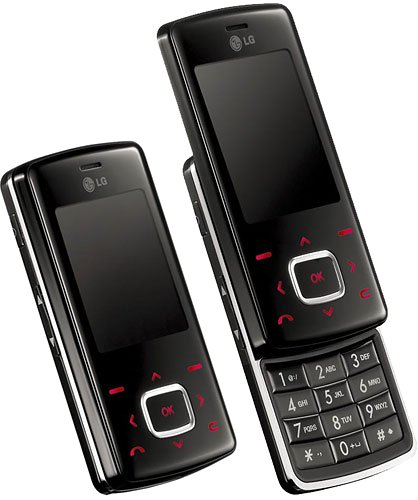 The box that came with it included an Asian power adapter with a US adapter as an addon, manuals, a USB cable and a wired headset remote control with a 3.5mm adapter (so you can use the included headphones or your own). The handset has volume +/- controls on the left side and a “hang-up/close” button on the right side, an LG proprietary hook for the USB cable and a camera/mp3 button. It is very easy to slide up the phone and uncover the numeric keypad underneath it. When you do that, the camera gets exposed too.

The KG800 boots up pretty fast, about 4-5 seconds from power up to the main screen. You will find every phone application one would expect, a Calendar, Tasks, Alarm, unit converter, calculator, file manager, Java Midp 2.0 games. The handset is able of SMS, MMS and voice mail, but no email. The phone comes with 4 profiles, a pretty good contact list (with speed dial and caller group support), an elaborate call list and more.

There is a pretty capable media player that can playback mp3, AAC, 3GP and MP4 (only MPEG4-ISMA works, in its “Basic” flavor). The mp3 player is pretty nice, it has EQ support, playlists and a selection of 3 visualizations. It is a basic mp3 player compared to the nice usability of a real mp3 player (e.g. iPod, Sandisk, Creative), but for the just 25-30 songs that fit in this phone’s flash memory, it’s a good enough player. Unfortunately, there is no A2DP/AVRCP support though.

The battery life of the handset is pretty good, it managed about 5 hours of call time, and about 180 hours in standby. When using the handset as an mp3 player (with the GSM antennas ON as there is no “flight mode”), the handset managed over 10 hours of music playback. Although we don’t think that anyone would like to listen to these same 30 songs for 10 hours straight…

The camera is able to shoot at various resolutions ands video recording goes up to 176×144 in the 3GP format. We didn’t like the camera quality that much (too much halo, over-exposes too much too). For a fashion phone it should have had employed a better quality camera. The camera UI is not that great either, although most needed options are present. The big problem though is that the phone is encoding its recorded videos in a 3GP format that it just doesn’t work with any of my desktop players that do support 3GPP and 3GPP2. Neither QuickTime or Real or VLC were able to playback the recorded video (download it here). More over, file name numbers recycle for pictures and videos, so if you want to back them up on your desktop, during transfer they will overwrite older files.

The biggest problem of the handset –except the missing card slot– is its old version of the LG OS it is running. This is a version of the LG operating system that it’s 2.5 years old. What LG really did was to get an old, tested version of their codeline and push it in a brand new shell. Testament to this is that the web browser included, is Teleca’s AU/MIC (which is an old version of the now-called “Obigo” framework) that is able to only do WAP well, and HTML in a very spotty fashion. For example, OSNews’ cHTML mobile pages don’t render well on this browser. The AU/MIC browser renders the “width=100%” on our table cells extremely long and requires painful clicks to move either horizontally or vertically. Additionally, the browser will refuse to work if you don’t enter a proxy IP address (this means that we were forced to use Cingular’s UP.Link gateway which is known to reformat content — something that is not always desirable). We also managed to crash the phone using this (pretty unresponsive) version of the browser. I have no doubt that the newer versions of Obigo are very good, but this old version that LG used for cheap, is just bad and unusable.

The other problem we found on this phone is that the so-much-hyped touch-sensitive keys are very difficult to use. Half of the time you find yourself clicking on things while this was not your intention. And the actual numeric keypad is not that good either — it doesn’t give you enough feedback when you press a key. In conclusion, this is a phone that looks & form go over function. I am a power user and so this phone would never satisfy me. But probably it would the average housewife who wants to show off to her also desperate housewife girlfriend. If you are a power user and you want an LG phone (with a very recent Obigo web browser version in it), get the U8500 (more features, and cheaper too). Normally, I would have ordered that phone for this month’s phone review instead of the Chocolate, but Hi-Mobile was out of stock for that model at the time.

For those who use their phones as their main digital cameras, they will know by now that their phone’s flash-lights (acting as camera flash) are not very powerful. Usually, a flash light only makes a picture 2-3 times brighter. But a real flash, can make it up to 10 times brighter. This is why Sony Ericsson have developed the MXE-60, which connects to any fast-port Sony Ericsson recent phone and functions as a strong flash support to the camera. The accessory is automatically recognized by the phones, it’s plug-n-play.

The MXE-60 comes with a neck strap that makes it easy to carry it around your neck. Do not make the mistake though to connect your phone in the MXE-60 and put it around your neck too, because your phone will likely fall to the floor because of the weight. The neck strap is for use only with the MXE-60. Also, about 10 flashes with the accessory will strip you off battery life about 5-8%. So, only use it when you truly need it.

Overall, this is a very useful accessory, especially if your Sony Ericsson fast-port phone doesn’t have a flash light at all. At just $20 it’s a steal! Check below for our findings, when we tested it along our W810i.