Home > Apple > What Is the Goal of the ‘Get a Mac’ Campaign?

Ever since Apple launched its ‘Get a Mac‘ campaign, with the accompanying ‘I’m a Mac – and I’m a PC’ ads, lots of people have voiced their opinions on the campaign; the content has been discussed, the actors, the humour; however, relatively little has been said about the actual goals – and consequently the effectiveness – of the campaign.What did Apple have in mind when they thought up this campaign? This question seems fairly easy to answer (sell more Macintosh computers, of course), but if the content of the various commercials is anything to go by, you may start to wonder if the folks up in Cupertino had some completely different goals for this campaign which us mere mortals cannot comprehend. As far as I can see, two things are fundamentally wrong with the campaign (assuming its goal is to sell more Macs to Windows users, that is). 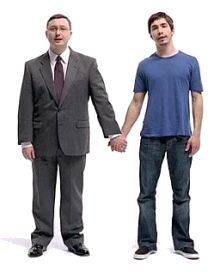 The first big flaw is very visible in the ‘Cancel or Allow‘ commercial. In this one, PC is accompanied by a bodyguard figure, which asks approval for each action PC wants to take; a pun at Vista’s new User Account Control, which has been criticised for being too restrictive (asking for permission too often, effectively). While this is a debatable ‘flaw’ in Vista*, it does have some shred of truth in it (so many reviewers cannot be wrong, I suppose); however, this is all irrelevant. This ad is supposed to sell Macs, right?

Well? Did you see any reason to buy a Mac in that commercial? Ok, so Vista has annoying UAC dialogs… But does that say anything about the Mac? How is this supposed to tell unknowing viewers (i.e. non geeks) anything about the Macintosh and its operating system? In an ad, you have to present the target audience with a ‘reason to buy’; this is absent in many of the ‘Get a Mac’ commercials.

The second major flaw in the campaign is one that is less obvious. Apple uses the concept of personification to represent both the product ‘Windows PC’ as well as the ‘Macintosh’, after which they start lamenting the personified Windows PC. They make fun of him, of the work he does, his family, everything. This is generally not a very wise idea, because what Apple is doing here is not ridiculing the Windows PC.

Would you buy from a salesman after he publicly humiliated you? Time and time again? 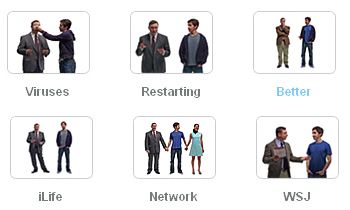 Since I do not believe Apple has a lousy marketing team (I mean, it is Apple we are talking about here), the only possible conclusion I can draw from the ‘Get a Mac’ campaign is that it is not trying to achieve the goal everybody thinks it does. While common sense says Apple wants to expand its installed base using this campaign, this cannot be concluded from the commercials, meaning Apple apparently has a different goal in mind.

One thing I can think of is that this campaign is supposed to consolidate the userbase Apple already has, which is not far fetched at all. However, if that is the case, it does have the wrong name– ‘Get a New Mac’, or ‘Get Another Mac’ would be more fitting in this scenario.

All in all, if the campaign’s goal is to sell Macs to Windows users, this campaign is simply not a very good one. It does not bring forth any ‘reasons to buy’, and on top of that, it ridicules its target audience. From this the conclusion can be drawn that the campaign simply has a different goal.

We can only guess what this goal is.

* You mostly see UAC dialogs during the installation of programs, which is a flaw in those specific programs, and not in Vista, since applications generally should not need to install stuff in places an ordinary user does not have access to. In normal use, I rarely encounter UAC.