Home > Editorial > What Are the ‘Usability Experts’ Doing?

Sometimes, Apple’s (or any other software maker’s) complete lack of respect for usability never ceases to amaze me. Take today for example. Apart from the close, minimise, and “maximise” widgets Apple places on window decors, there is also a fourth widget programmers on the Apple platform can use. This widget resembles a sort of dash, and is placed on the top right corner of the window decor. This widget is used in many applications, both from Apple as well as from various third parties. It has one function: toggle the visibility of the window’s toolbar.Take Colloquy for example, my favourite irc client on Mac OS X. This is a shot with the toolbar visibility toggled to “off”:

And this is a shot with the toolbar visibility toggled to “on”:

Now, this is the default, and thus expected, behaviour of this dash-like widget. A lot of applications, including those written by Apple itself, use this widget this way. However, I rarely saw this widget on brushed-metal applications. One exception to this rule was the Finder. The Finder is a brushed metal application, but it does sport this widget. Since Finder by default comes with a toolbar I rarely (if ever) use, I wondered what the Finder toolbar would look like without the toolbar. Unsuspecting, I clicked the dash widget.

And then, a whole lot of stuff happened all at once. Ok, this is how Finder looks normally, with the brushed metal interface: 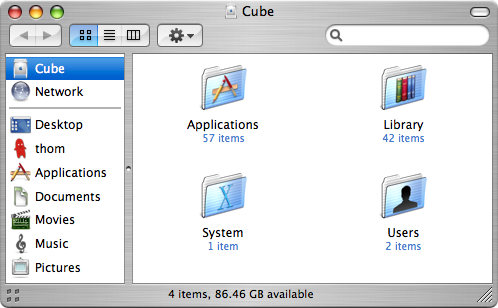 Then, look what happens when you toggle the dash widget: 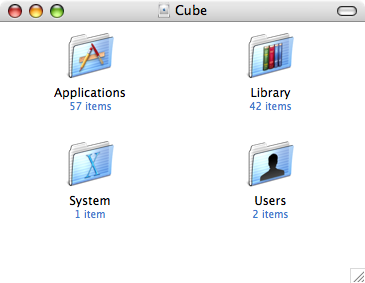 Right. This button not only toggles the visibility of the toolbar, but it changes the entire appearance of the window. Not only does the toolbar disappear, but also the sidebar. On top of that, the theme is changed to plain aqua (or whatever this theme is called, I lost track long ago).

However, that is not all. The worst is yet to come, you see. The button that is supposed to only toggle the visibility of the toolbar, not only changes the things mentioned above, but it also transforms the entire Finder in one of the most fundamental ways you can ever alter a file manager.

It turns it from a navigational file manager into a spatial file manager. Yes, that innocent button changes the entire functioning of the file manager in an extremely fundamental way. On top of that, the spatial version of Finder is a bad implementation of the concept as well; for instance, open directories are not marked as such, which is a very important aspect of the spatial metaphor.

But wait! That’s not all! The spatial metaphor is only retained when you start navigating the filesystem from the exact same window you toggled the dash widget on! When you toggle the widget in /usr, destroy that window, and then start navigating in /bin, you get back to the navigational Finder; while when you start browsing in /usr again, you are back in spatial mode! Insanity!

It are these kind of things that really make me wonder where all that money that Apple, Microsoft, and other software companies have is going to. Microsoft, for instance, has a similar issue with Internet Explorer 7 where the menubar is suddenly placed below the address bar when you toggle its visibility (off by default), and there is no way to drag it above the address bar anymore.

Seriously, what are all these programmers and “usability experts” doing if they make stupid mistakes like this?