Geeks.com sent us over one of the best video cards on the market today: the GeForce 86000GTS with 256 MB VRAM and a crazy fast 675 MHz engine clock. The card is on the high side of the middle-end graphics cards compared to others available and it’s currently selling below $200. In this article we will test the multimedia performance of the card as used in video playback and rendering support rather than its already well-benchmarked multiple times so far and well-known gaming abilities.The Zotac 86000GTS GPU also sports 400 MHz RAMDAC technology and a maximum resolution of 2560×1600. It comes wiht 256 MB GDDR3 memory with 2 GHz memory clock and 128-bit memory bus width, all on a PCI Express x16 interface. It is SLI and HDCP ready (some 8600GTS cards don’t come with HDCP support but this Zotac-branded card does), and it comes with Dual Link/Dual DVI connectors. In the box we found the card itself, a driver CD, a DVI to HDMI adapter, a DVI to VGA adapter, an S-Video to HDTV-out adapter and a 2x 4-pin Molex power for PCI-e enabled motherboards. 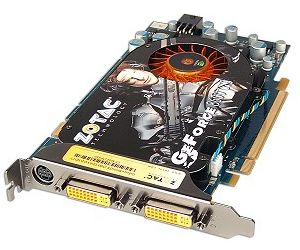 PureVideo HD is a second version of PureVideo as found in the GeForce 7xxx cards. This time Nvidia made a lot of work on how their architecture handles VC1 and h.264 decoding and so they offload almost up to 100% of the main CPU when a supported application playbacks such video files. To get that 100% CPU offload, there are some prerequisites: You must run Windows Vista and DirectX 10 and the video playback application must support the PureVideo HD architecture, although with DX10 Nvidia is able to help other, non-supported applications, to get some gaining in CPU offloading, just not as much as if your app was specifically supporting the new API. Most Windows XP DX9 and unsupported DX10 apps can get some gain of performance regardless though, so that’s a good thing: especially if you run on a not-so-fast PC, the level of performance you get out of it can be significant and the difference between “frustrating HD playback and being watchable”. A PureVideo HD driver for XP is expected this summer, so until then the previous implementation is supported. Here are our impressions with various applications & OSes so far, compared to our previous graphics card (an ATi X300 SE, but DELL also called it X100 back then when we purchased the system from them):

Not having a Blu-Ray or HD-DVD optical drive around to test won’t give enough justice to this card, but regardless of it, it has already made our multimedia HD life much more bearable than before.

Where the big surprise came in though was with our consumer $130 video editing solution: Sony Vegas Movie Studio Platinum 8. For those who know Vegas, it does not specifically support any professional GL card like the Quadros. Video editing is my new main hobby, and so I needed something that could speed up Vegas even if it didn’t specifically support GL or PureVideo HD. Thankfully, the GeForce 8600GTS came in to outperform my old ATi card and that was a surprise to me because I didn’t really expect it. Vegas now playbacks HDV video from the timeline or the media-bin at double the performance than before — without even have to request a “build dynamic ram preview” from Vegas. All I can say is that HDV editing with Vegas is now bearable on our DELL 3 Ghz P4 with 3 GB RAM. And the fact that the card supports HDTV & S-Video out is a very important point for video editing as it allows you to test the colors, contrast and brightness of your video to a real TV — just like the pros do (the Pro version of Vegas supports playback preview on an external TV monitor).

It gets better: we downloaded the “Magic Bullet Editors 2.0” effects filters for Vegas as this specific application can take advantage of Nvidia’s GPUs. Here is the amazing result of before and after:

Regarding 2D performance, the card managed exceptionally well. Both our monitors worked perfectly in terms of quality (our Viewsonic 1680×1050 and our rotated Samsung at 1200×1600) but as much as we loved the fast hardware and had fun playing with the Froggy 3D demo, the card’s drivers were not all rosy though. The stable drivers had a bug with our dual monitor setup where one of the monitors is rotated 90 degrees: it would rotate the screen but not… the mouse cursor. The bug is fixed in the unstable driver from July 5th, but we managed to found another dual-monitor bug: the Quicktime browser plugin would crash our Firefox and IE unless we disabled Quicktime’s “Enable DirectDraw on secondary monitor”. Hopefully, this bug will be fixed soon from either Apple or Nvidia. My suspicion is that the bug is on QuickTime though not liking dual monitors much, especially when one of them is rotated — although the crash did not happen with the ATi drivers.

Gaming aside, where the card is one of the best around, this card is the poor man’s professional GL and video card. It speeds up up to 80% not only video playback, but even video editing systems that support DirectX instead of GL. Given that Vegas starts to become very popular among amateur and semi-professional videographers lately, this card can help speed up some operations on that application or other consumer NLEs that support DirectX instead of GL. We can’t recommend enough the GeForce 8600GTS as a multimedia powerhouse, but if you can’t afford the particular model, consider the GeForce 8400GS at just $63 which also has S-Video out — a pretty important feature for all you prosumer Vegas videographers!