From Linux Mint’s About page: “Linux Mint’s purpose is to produce an elegant, up to date and comfortable GNU/Linux desktop distribution.” To reach this goal, lead developer and founder Clement Lefebvre used (surprisingly) Ubuntu as the base, and added multimedia codecs to the distribution, by default. Later on, Mint deviated more from Ubuntu by adding its own artwork, web-based package front-end, and configuration tools (MintTools) to the mix. I installed the latest stable release, Daryna (4.0), released on 15 October of last year, to see what’s what.Ubuntu users will feel right at home on Linux Mint. Daryna uses Ubuntu’s Gutsy Gibbon as the apt base for its packages, and you could say it is loosely based on this release as well. The CD boots to a full live CD from where you can start the installation. The installation routine is the same as Ubuntu’s: fairly easy to use, but as I have said before when it comes to Ubuntu, a bit more control here and there would be nice (especially when it comes to package selection).

Mint 4.0 comes with GNOME 2.20, and version 2.6.22 of the Linux kernel. It is important to note that Mint is compatible with Ubuntu’s repositories, and as such, has access to all of its packages. In other words, Mint is not forking anything. I installed Mint on a machine with an AMD Athlon XP 1600+, 640MB of RAM, and an nVIDIA Geforce 6200 with 128MB of video RAM.

The first obvious difference between Mint and Ubuntu is of course Mint’s artwork, which , I must say, is a lot more appealing than Ubuntu’s brown and orange. Ubuntu’s Human theme is a regular discussion starter, and personally, I do not like it at all. For some reason, brown and orange just do not work for me as the contrastive colours in a user interface. Sure, it helped define the brand “Ubuntu”, but the first thing I do after an Ubuntu installation is applying my own combination of window decor, icon set, and interface theme. Mint uses the more traditional (dark) blue as its contrastive colour, with elements of mint green (really?) scattered throughout the desktop (icons, mostly).

They also applied some other cool tricks like diagonal striping on menu bars, menu item highlights, and the GNOME panel, which looks pretty slick. It is also refreshing to see UI people who are actually not trying to ‘unify’ everything. Unifying the title, menu, and toolbars seems to be all the rage these days, but I detest it as it seriously hinders differentiation between the various elements. On Mint’s default theme, the title, menu, and toolbars are clearly separate entities. 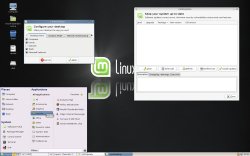 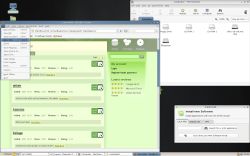 Mint’s changes to the user interface go beyond mere themes, though. The desktop layout itself has been changed too. Instead of the usual GNOME two-panel layout, Mint sticks to a single bottom panel, which houses all the important applets (taskbar, system tray, menu, etc.). I never particularly liked the two-panel layout (especially the top panel wastes a lot of space) so I always switched to a single-panel layout anyway after installing Ubuntu. I have a 1680×1050 21″ flat panel, so I have enough space to house everything I want on a single panel.

It is clear from the get-go that the Mint team has put a lot of effort into creating a coherent look for its distribution. We are not talking about some kids picking a few random themes with cartoon penguins on them from GnomeLook.org and putting those on an Ubuntu live CD. The artwork is custom, and well thought out; all the way from the GRUB theme to the icons, and everything in between, it is consistent. This way, Mint offers a refreshing alternative to Ubuntu’s Human theme.

Mint also comes with a few configuration tools you will not see in Ubuntu. MintInstall allows you to download .mint files from the Mint Software Portal, which act as metapackages for all sorts of applications, such as Real Player, Opera, Evolution, and more. MintDesktop is a configuration tool where you can configure some GNOME options that would normally require gconf-editor (Nautilus mode, desktop items). It also turns on and off the Network Autobrowsing feature, a great tool that automatically mounts SAMBA machines on your network.

MintUpdate is Mint’s software update tool, which works pretty much like you would expect an update tool to work (notifications, exclusion, etc.). It actually rates updates from 1 to 5, telling users how important the update in question is. MintUpload allows you to upload a file to Mint’s servers (right-click on any file), where it will stay available for two days, so you can share it with friends.

While the MintTools are not in any way very special or unique, they do add some nice touches to the Mint desktop. Not something to switch distributions for, but they are nice tools all the same.

On the application front, Mint deviates a little from stock Ubuntu. The first thing I noticed is that the default (and only) email client is Thunderbird instead of Evolution. For 95% of the people out there, the choice between Thunderbid and Evolution will be arbitrary, but personally, I am not particularly a fan of Thunderbird for reasons that I will save for another article someday. Of course, installing Evolution (which I hate just a little less) is easy enough (you can use the Software Portal or apt-get/synaptic), so the point is a little moot.

Where most GNOME-centric distributions choose a Gtk+ or Mono-based audio player, Mint decided to go with KDE/Qt’s Amarok, most likely due to popular demand. I do not like Amarok at all, but this is again a moot point due to the wonders of package management. There is one thing though: Mint does not seem to ship with a cross-toolkit theme, which means Amarok (and other possible Qt applications) will not sport the same look as Gtk+ applications. Just so you know.

Linux Mint is a nice distribution. It is certainly not revolutionary, and it would be hard to find any specific advantages Mint has over ‘plain’ Ubuntu (apart from its looks), but overall, it does feel as a very coherent package, with considerable thought put into all aspects of the system. Especially in the looks department, Mint kicks Ubuntu’s butt. To me, using Mint just means I have to do a lot less work after an Ubuntu installation. The looks fit my desires much better than Ubuntu’s, it offers easier access to some important configuration options normally reserved for gconf-editor, and offers some nice touches like the web-based Software Portal, pre-installed multimedia codecs, and Flash.

There are multiple versions of Mint – KDE, Xfce, and GNOME – so there should be something in there to everyone’s liking (there are ‘light’ versions too, which lack any patent-encumbered packages). Mint carries all the advantages of Ubuntu, and adds its own distinctive ideas to the mix. Whether those ideas are interesting enough to choose Mint over Ubuntu will be entirely up to you.