AMD had a bit of a setback with their Barcelona server processor, the company seems to have moved on. During a conference call today, the company laid out its plans for the server space for the coming years, putting 6 and 12 core processors on the horizon.In the first part of the conference call, AMD assured that the Barcelona debacle is now part of the past, and that it is now shipping in volumes. During the rest of the conference call, the new processors were the centre pieces of the show: the quad-core Shanghai in early 2009, the 6-core Istanbul in late 2009, and the 12-core Magny-Cours and the 6-core Sao Paulo in 2010. They even made a nice diagram that kind of sums it all up: 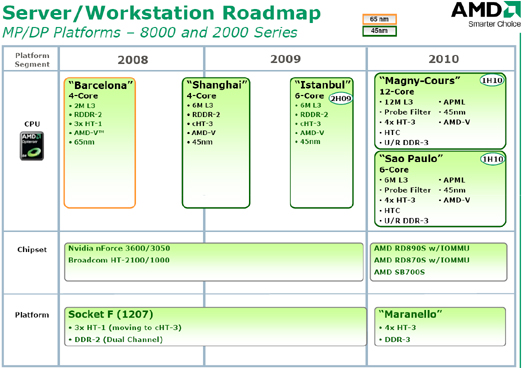 Ars explains the importance of the Shanghai processor design:

The pressure on Shanghai at this point is immense; all of the CPUs on AMD’s server/workstation roadmap for the next 2.5 years are Shanghai derivatives. AMD’s current financial situation and market share have left the company with no room for error; its next-generation CPU will need to shine from the get-go.