As I already explained in the first Usability Terms article, consistency goes a long way in ensuring a pleasurable user experience in graphical user interfaces. While some user interfaces appear to be more graphically consistent than others, Windows has always appeared to be worse than most others – probably because it carries with it stuff that dates back to the 16bit era. IStartedSomething agrees with this, and started the Windows UI TaskForce.The idea is simple: list your pet graphical inconsistency in Windows Vista, describe it, provide a possible solution, and Long Zheng will make sure they get passed on to someone at Microsoft who is known for “getting things done”.

Most of us who use Windows Vista have probably come across a couple of user-interface quirks during our times – some of which irritate you more than others, some are more obvious than others. With the development of Windows 7 speeding full-steam ahead, I thought this might be an opportunity as good as ever to make these problems known to Microsoft and hopefully get them all resolved. 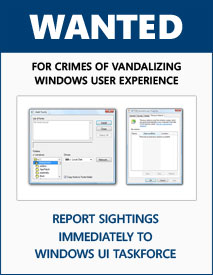 He started the list by himself, but since then it has expanded quite a bit already, and additions are being made continuously. Most of the complaints are minor, like aliased text where it should be antialiased or XP-style icons scattered throughout Vista. Some, however, are far more serious like the completely unusable “Safely remove hardware” dialog (whoever came up with that one deserves a spanking with USB cables), and the Windows 3.x-style (!) “Add fonts” dialog.

Some of them have already been fixed in Windows 7, and have been marked as such. In other words, your voice is being heard. Make use of this power, and help everyone by making the Windows graphical user interface a little more consistent. On behalf of all consistency freaks out there, I salute you.

Of course, first post your pet inconsistencies here in our own comments’ section, and feel free to go beyond Windows and dive into other environments too.