While last week was a tad bit uneventful, this week made up for it. Not only did we get the long-awaited release of KDE 4.2, we also gained more insight into the whole Palm/Apple thing, NVIDIA’s CEO said a few funny things, and we got an important sit-rep on SkyOS straight from Robert Szeleney himself. This week’s My Take is about life, death, and resurrection.

The biggest news of the week was the long-awaited release of KDE 4.2. This new release marks the end of the testing phase by being the first release ready for everyone – instead of just developers and enthusiasts. It was well-received by most people, but some still noted bugs and certain features from the 3.x days lacking. Sadly, the discussion around the release here on OSNews focussed on KDE 4.0, instead of discussing the actual release at hand – but hey, you can’t steer a community, and apparently, KDE 4.0 made a lasting impression. Positively or negatively, your pick.

We had some additional insights into KDE 4.2 thanks to a short interview we did with KDE’s Aaron Seigo, who detailed some of the new features in KDE 4.2, while also giving some information on the direction KDE 4.3 is heading. Right before the release, we published an editorial about change and resistance in the light of KDE 4 and Windows 7.

The week started off with news that the EU might force Microsoft and OEMs to offer a choice of browsers to their customers, in order to break the monopoly position that the EU thinks IE still has. This idea was mostly met with scepticism by many, even by those in favour of action against Microsoft for including Internet Explorer with Windows.

Engadget dove into the whole Apple/Palm patent issue, and concluded that both companies infringe on a number of each other’s patents, raising the question whether or not it makes sense for ether of the two to go on the legal offensive. A patent agreement between the two seems the more likely option, but with Apple’s rather protective and isolationalist policies regarding patents, it could still end ugly.

Also of note this week was NVIDIA’s CEO Jen-Hsun Huang, who went on a rather inconsistent tangent against Intel. He claimed that Intel’s Atom is hurting the software industry, holding it back, and that netbooks are, excuse my wording, shite. His arguments, however, were rather weak, and most in the comments agreed that his words were of the clutching-to-straws variety.

Later on in the week, we ran an editorial on the lack of updates and activity within SkyOS, and rather harshly, I concluded that paying for SkyOS was unwise. This led to an interesting debate, but with the desired outcome: Robert Szeleney explained the lack of progress, and stated he is pondering SkyOS’ future, possibly releasing it as open source. Time will tell where this will lead to.

Back in 2003, an unlikely television series made its way onto the Showtime network. Created by Bryan Fuller (also known as god), the series was one of the weirdest pieces of television to ever gain traction – a story about a dead girl becoming a grim reaper in this surreal world of Der Waffle Haus, Rube Goldberg-esque death sequences, and the Happy Time temp agency. The series excelled at something usually only found in quality films: dialogue. There weren’t any major special effects, no tits, no explosions – just a series filled with surreal events and dialogues and monologues that made you think about life, death, and everything in between – and after.

Dead Like Me had this weird thing where it kind of took control of your life, making you see things that weren’t there. I remember getting a text message from one of my friends – fellow DLM fanatic – which read: “Saw someone who looked like George. I moved seats just to be safe”. Personally, I got scared of yellow post-it notes. That was a fun counselling session.

The series became a cult hit – despite my despise for the term cult (either something is popular, or it isn’t; quit making up words [cult, indie] to set one type of popularity apart from the other). In any case, it gained a loyal and very passionate fanbase, who were saddened by the decision to axe the show after only two seasons. Using the magic power of hindsight, it was probably the right thing to do, though; season 2 lacked the spark of the first season. It was still good – but not as good as.

I am one of those crazy Dead Like Me fans – you’ve surely encountered some of us, lonely, stranded across the internet, curled up in corners, asking for another Dead Like Me fix, grieving over a photo of Ellen Muth, spastically clutching onto our box sets of season one and two as it were our offspring.

Still, on the fringes of society, we DLM fanatics hung onto the impossible dream: the resurrection of our object of affection. George, Mason, Rube, Daisy, Roxy – surely, the evil demons at Showtime wouldn’t just let them rot away for eternity? As it turns out, they did not. Us fans received word that a direct-to-DVD film was in the making, with most of the original cast returning to duty. Cheers abound, but also some sadness because two important cast members would not be returning: Mandy Patinkin as the enigmatic Rube Sofer (leader of the reapers), and Laura Harris as the she’s-sad-about-something Daisy Adair.

I’ve already seen the new film – titled “Dead Like Me: Life After Death”, and I have a few things to say about it. I’m not going to review the entire thing, but I want to specifically address the biggest fear of DLM fans: can DLM survive without Mandy and Laura? Short answer: yes. Long answer: read on.

Many expected the lack of Rube to be the biggest problem for the new film. Mandy Patinkin shone brighter than ever in his role as Rube, and portrayed the aloof pack leader with excellence. Rube’s cryptic nature and enigmatic one-liners were one of the main pillars of the show. I am glad to tell you that his absence doesn’t seem to affect the film all that much; I never really missed him – the way he eparts the show is believable and fits into the story quite well. The new leader is played by Henry Ian Cusick – of Lost fame – and he does a good job, as always. He’s no Rube, and he doesn’t try to be; he brings a different and fresh spark to the team. 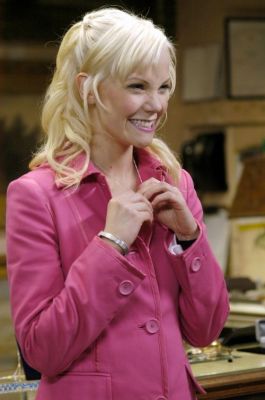 Personally, I was expecting the lack of Laura Harris as Daisy Adair (see photo) to be the biggest loss to the show. Daisy Adair has always been my favourite character – she has this dumb blonde actress thing going on, but from the moment she joined the show, it became obvious there’s this troubled backstory to her existence, something intrinsically sad, and hints to this are left all throughout the series.

Laura Harris – one of the most beautiful women I’ve ever seen – played that role beyond excellence. Luckily the writers didn’t decide to write Daisy off, and instead found an actress to replace Laura: Sarah Wynter. Sarah has some very big shoes to fill here, and for the most part, I can say she pulls it off. It’s clear she’s a very good actress, but she does need to grow into the role of Daisy a little more. Daisy’s mannerisms and facial expressions were mesmerising, and Sarah simply doesn’t have the type of face and style to pull them off.

However, this is her first go, and she obviously brings her own interpretation of the character, and I’m definitely giving her the benefit of the doubt. I’m sure that if the series gets a new season, she’ll turn out to be an excellent Daisy.

Overall, as a die hard Dead Like Me fan, I really liked the new film. It moves away from season 2, and inches closer to the surreal and playful feel of the first season. Fans like me are hard to please, but I think the writers, actors, and the rest of the team pulled it off, no small feat. My advice is a definitive “buy!”. The more copies sold, the greater the chance we might see another season.

Please note that if you are interested in buying this item, you could opt to buy it from the OSNews Store at Amazon (direct product link). Prices are the same as in the normal Amazon online store, but by buying through the OSNews Store you support OSNews financially. Thank you!