Microsoft’s CEO Steve Ballmer had some interesting things to say yesterday about which companies Microsoft sees as its competitors in the client operating system space. You’d think Apple was their number one competitor – and you’d be wrong. Microsoft sees two other competitors as their primary adversaries.

During a speech for investors, Steve Ballmer showed the following slide to his audience: 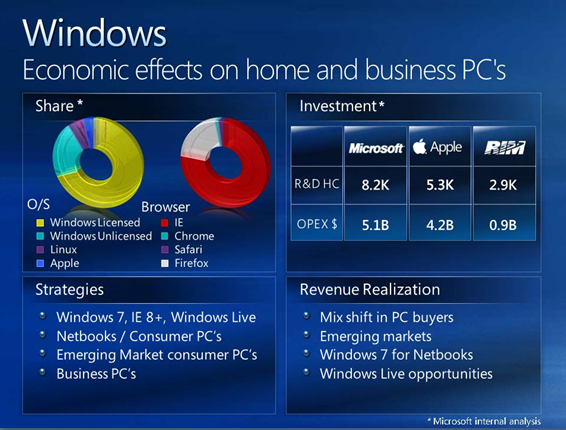 As you can see, Microsoft sees piracy as its biggest competitor. “Number two market share goes to Windows pirated, or unlicensed,” Balmer said, “That’s a competitor that’s tough to beat, they’ve got a good price and a heck of a product, but we’re working on it.” This isn’t exactly new information, but it’s interesting to see it spelled out so clearly.

Much more interesting is Microsoft’s idea of Linux and Apple, According to Microsoft, Linux is a bigger threat to the company than Apple, placing Linux above Apple in the marketshare figure pie chart thing. “Linux, you could see on the slide, and Apple has certainly increased its share somewhat,” Ballmer said. He went on to explain how the company views Apple:

As much as I find Ballmer a rather annoying figure, he does score a major point here. About 300 million PCs were shipped worldwide in 2008. Round and about 9-10 million of those were Macs. Apple’s market share might be increasing, but it’s still relatively irrelevant compared to the bigger picture. As we said yesterday, Apple might be doing swell in the United States, but on a worldwide scale, Cupertino still falls a bit to the wayside.

In any case, it appears that Linux (and piracy) is a larger blip on Microsoft’s radar than Apple, and it’s not hard to see why. With an economy that’s not doing very well, people will opt for cheaper products. Apple cannot offer those, but Linux and piracy can.