Recently we’ve had a couple of articles and discussions on OSNews about browser statistics. Every now and then someone in the comments will ask what OSNews statitstics are like, and what browsers and operating systems our readers are running. Well, recently we installed a fancy new web site analytics program, Mint. I figured I might as well put it to good use by showing some of the browser and platform statistics we’ve gathered over the past month.

It is obvious that these figures are representative of nothing other than the OSNews readership, which means that in no way can they be extrapolated to other websites or the rest of the world.

For the most part, our statistics aren’t very surprising. As a website dedicated to alternative computing, with a readership consisting largely of, well, nerds, you’d expect to see lots of non-Windows and non-Internet Explorer users, and this turns out to be true. Still, deeper down in the data there are some interesting figures.

As was to be expected, we have lots of readers using Linux and Mac OS X. Still, I had not expected that Windows’ share would be over 50% (I had expected more Mac users). 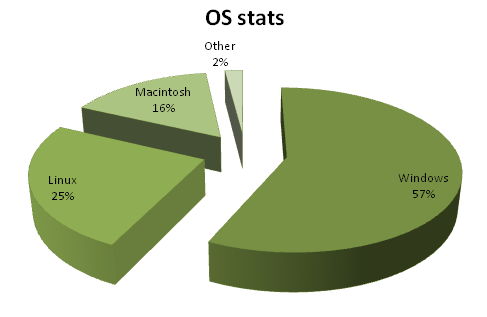 There is more to this chart than meets the eye, of course. When you break down the Windows figure into Windows XP, Vista, and previous versions, you’ll see that Vista really isn’t popular among OSNews readers. That 57% breaks down into 40% XP, 13% Vista, and 3% unknown (Windows 7?). The remaining 1% is previous versions (adding up to 57%).

OSNews’ Mac users are a lot more eager to upgrade, with the 16% figure consisting of 13% Leopard users, 1% Tiger users, 1% unknown, and less than 1% iPhone users. I had expected the iPhone figure to be slightly higher, I must admit. I also like to believe the “unknown” are stubborn Mac OS 9 users.

Sadly, we can’t really break down the Linux figure. It’s just 25%, and we don’t know anything about which distributions or desktop environments people are using to access OSNews. The “other” figure is also unspecified, but those are of course all Amiga users. Right?

Our browser statistics are pretty straightforward, and don’t contain too many surprises. 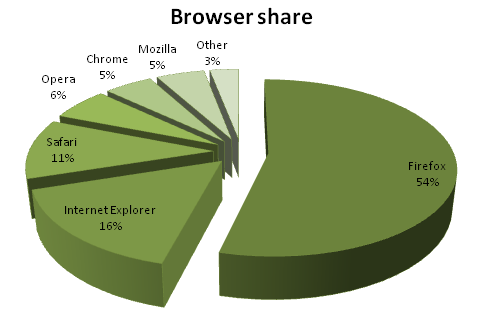 Firefox is obviously the big bad evil monopoly here, with more than half of our readers preferring Mozilla’s golden boy. What’s interesting is that there are still quite a number of people using Firefox 2.x, namely about 3.5%. We also appear to have quite a few Mozilla-proper users on OSNews.

Where it gets a tad bit worrying are the stats for Internet Explorer. Apparently, we still have 5% of our readers visiting OSNews with Internet Explorer 6.0, which should be a crime. Internet Explorer 7 is stuck at 8%, and version 8, only recently released, is already at 3%. And yes, Mint even reports a number of users using IE 5.x, which isn’t all that weird seeing we still get Windows 95 and 98 users as well. We also had a few people coming in with an Internet Explorer 999.1 string, which most likely are people who think they’re being funny. Which they’re not.

For the rest, we already have a lot of Chrome 2.x users (relative to 1.x, that is), and the same goes for Opera – we already have quite a number of Opera 10 users (again, relatively speaking).