And so Firefox continues its march into Europe. It is no secret that alternative browsers are much more popular in Europe than they are in North America, and recent statistics by StatCounter confirm that Firefox 3.0 has actually surpassed Internet Explorer 7, making it the most popular browser in Europe.

StatCounter gathers its statistics from its own network of users, which encompasses 3 million web pages, leading to 4 billion page views per month. As always, statistics are statistics, so I wouldn’t bet your life on them. 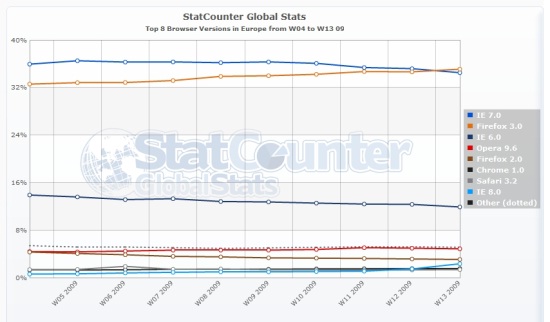 The figures for Europe differ a great deal from those of the rest of the world. StatCounter’s statistics for worldwide browser usage put IE at 62%, Firefox at 29%, and Opera, Chrome, and Safari at less than 3% each. North America has figures very similar to the worldwide ones, but with Safari at 5%, and Opera at less than 1%.

Diving deeper into the European figures, it’s pretty clear that my country (The Netherlands) is a bit behind the times, with Firefox at 21%, and IE at 73% – the others barely make a blip on the radar (except for Safari at 3%). It seems like other European countries are the ones doing all the hard work: in Poland, for instance, Firefox’ share is at 51%. Opera is doing very well in Russia, with a share of 37% (!).

The figures for operating systems are also fun. In Europe, Windows XP does 69%, Vista 24%, Mac OS X 3.5%, and Linux 1%, which happens to be similar to the worldwide figures. North America is the different one here, with only 0.5% using Linux, and 7.8% using Mac OS X.

As always, these are just statistics, so be cautious.