Home > Wireless > A Quick Look at the Nokia E75

PureMobile sent over the Nokia E75, one of Nokia’s latest business phones. Let’s see how the phone stacks up compared to the rest of Symbian S60 3.x phones we have around.

The E75 is a business oriented quad-band smartphone, running the latest 3.2 version of the 3.x S60 branch. We received the US version, that offers HSDPA 850/1900/2100 frequencies. It weighs just 139 gr, it has a 16mil TFT QVGA 2.4″ screen, a full QWERTY keyboard and an accelerometer sensor for auto-rotating. It features a 3.5 mm audio jack, 85 MB internal storage, microSD up to 16GB with a 4GB card being included, EDGE/GPRS/HSCSD, WiFi, Bluetooth 2.0 with A2DP support, a microUSB connector for data only, a 3.2 MP camera with audofocus and LED flash, a VGA video-call camera, an ARM11 at 369 Mhz, stereo FM receiver with RDS support, GPS/A-GPS, and a 1000 mAh battery. 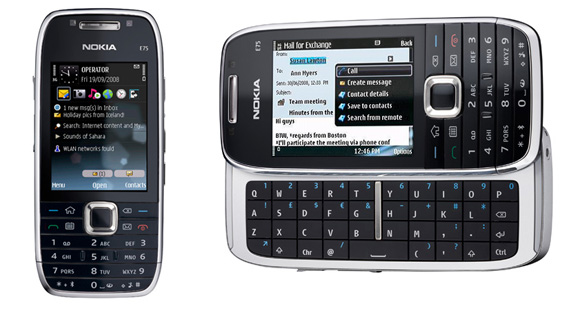 The hardware specs are certainly impressive, and the included software, a very-well behaving and dedicated email app, MS Exchange, VoIP SIP etc, are all playing an important role to a modern businessman. Add to that the feature where you can put the phone in “personal mode”, and have for example, launchers in the front-screen that are more entertainment-based (e.g. Camera, mp3 player, N-Gage etc) rather than work-based, make this phone an all-around great gadget for those who want to use the same cellphone for both business and pleasure.

I won’t go into much detail about the S60 3.2 software, since its 98% the same as in the previous phones we reviewed here on OSNews. But I will say this: the icon placement in the various menus on the phone made more sense this time around, than in any other older Nokia phone I have ever used. Additionally, the phone was spiffy fast.

WiFi, Bluetooth, GPS and cell reception all worked perfectly with the unit I received, and with acceptable voice quality. Online, there’s quite some complaining about cell reception, but my unit worked just fine. Where it didn’t work fine, was in battery life though. I get less than 4 days of standby, which is of course extremely short. I made sure that VoIP, WiFi, email, BT are all off, but I still don’t pass the 4 days of standby battery life! Other people don’t complain about this online much though, so there’s always the possibility that my specific battery unit is problematic. To its credit though, its battery fills up really quickly when charged!

Camera performance is very so-so, but its VGA video recording quality was acceptable (right click to save in order to watch it). Not as good as the iPhone 3GS’ though. The phone has a lot of camera-specific tweaking menu options, more than most other phones, so that alone should please the photography geeks.

One of the most important features of this phone is of course its 4-row qwerty keyboard. It’s a great feature to have, but, it could have been better. The keys are so close together and not at an angle/separation, making it difficult to know if you pressed a key, or two keys… More over, the upper row is too close to the edge of the upper sliding part of the phone, and so when you try to type on that row, your thumbs keep hitting that part, making it difficult to type fast. My husband had the exact same problem with it when I insisted that he should try it.

I would like to take a bit of a semi-detour here and say something about the great VoIP SIP support this phone has. From all the Nokia phones I have tried, this seems to have the most stabler VoIP SIP support so far (the phone stays “registered” to the VoIP server for a long time without dropping out as older Nokia phones used to do here). I am extra happy to say that I have configured my Google Voice account to talk to my Gizmo5 VoIP SIP free account. This way, I get a free call-in. Anyone can call my Google Voice number, and my E75 will answer in VoIP mode! How cool is that?

Overall, this is a great business/pleasure phone, without an identity crisis. VoIP is for me its strongest point, but battery life its weakest link. Still cool though.