Whenever there is a new company popping up, offering to install OSX on “Hackintoshes”, everyone questions: Is this company for real? Do they think they can really take on Apple’s Legal Team? What are their motivations? They’re probably just in it for a quick buck or looking to be bought out once they achieve minor success. Here, I outline what I learned about Quo Computer on July 10th, 2009 and some of the things people can expect.

So yes, Quo Computer is very real. Having seen the announcement of its storefront opening on OSNews.com, I was immediately intrigued when I noticed that its location was in an area down the street from where I grew up. I was even more intrigued when I noticed in Google Maps that the address was next to my 2nd favorite hamburger joint in Alhambra, CA (that being Tops Jr. with my favorite being Rick’s Burger which is also located on Main Street).

The Quo address was to the old hobby store in Alhambra that had gone out of business some time in the mid-90’s when the wave of computer and console games took over the mindset of teens in the area who used to build model aircraft, cars, and the like. My dad used to buy his model glue there when he was a kid for his small collection of WWII aircraft and I remember accompanying my uncle in the mid-80’s when he needed supplies to build his model lowrider show car to go with his real “Just for Looks” club import lowrider. 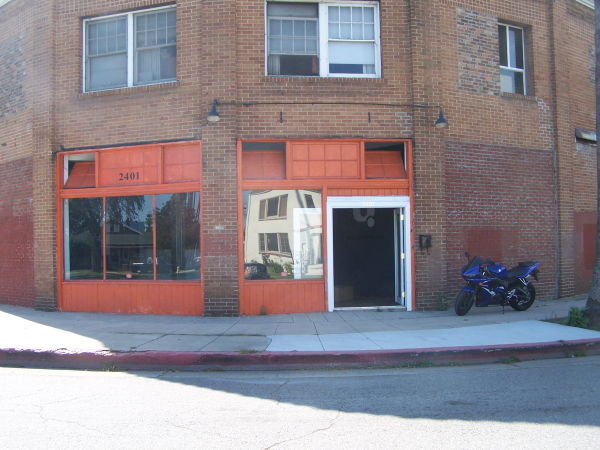 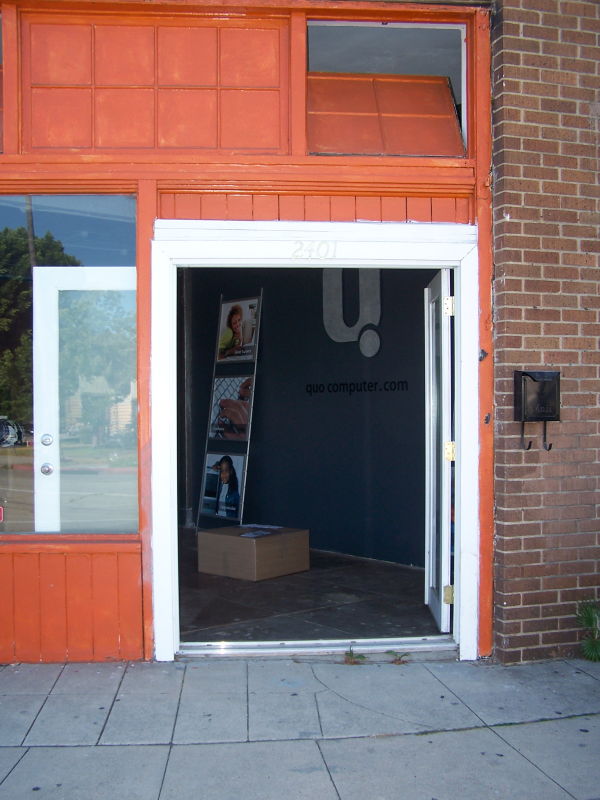 Fastforward to the Present

These days, this part of West Alhambra is starting to see revitalization. Quo computers, in an indirect way, aims to be a part of that. As I walked towards the store, that wasn’t very apparent. The outside shows the wear and tear of decades of SoCal sun and earthquakes in what is certainly one of the oldest buildings in Alhambra. However, once inside, you notice a familiar combination of computers and displays that you’d find in the dozens of computer repair & custom build shops in the San Gabriel Valley that Alhambra is a part of. You also notice the sparseness of a new business: a few boxes of newly UPS received parts, another box on its way out, a few machines being repaired, a few new custom builds, and a little decoration. 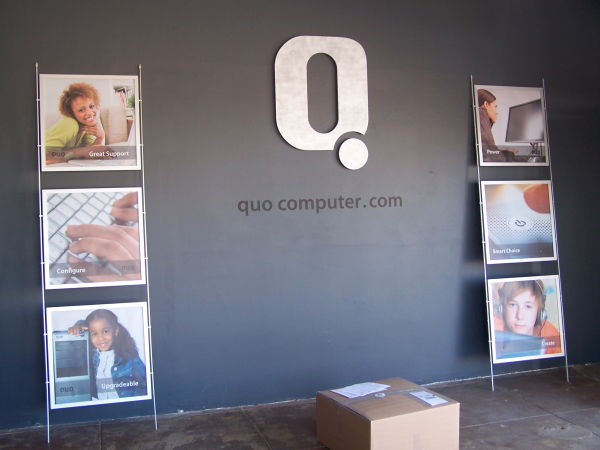 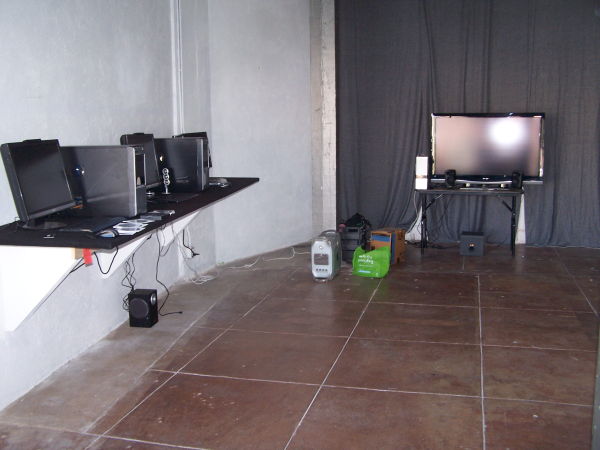 In essence, a completely typical scene at any mom and pop computer shop. Looking deeper, talking to the shopkeeper, you quickly start to see that there is something quite different about this shop; something special.

A New Vision to shake up the Status Quo

Once you start talking to the shop keeper Rashantha De Silva, almost instantly, you’re blown away by his genuine, heartfelt, intelligent nature. He’s a long time Mac user, former Mac IT consultant and he’s building on his deep network to procure the hardware he needs from vendors in the East. Everything from CPUs, to RAM, to boards, to graphics chips, and even CPU cases.

Rashantha minces no words with what he is doing: he’s looking to be the “Pimp My Ride”, “West Coast Customs”, “Orange County Choppers” of computers. Building ultra-custom computers for anybody who wants them. And that includes everything from installing Mac OSX, dual booting Windows XP/Vista/7 and OSX, or even triple booting OSX, Windows and Linux. He mentioned to me he has built render farms for the movie industry using his machines. He also mentioned that he’s playing with the idea of building BeOS/Haiku boxes.

But like all the good customizers, Rashatha has a few stock tricks up his sleeve: namely, the LifeQ, ProQ, and MaxQ which run Linux and Windows quite well in addition to Apple’s Mac OSX that he has garnered some fame for. Rashantha is also planning on expanding his line of LifeQ, ProQ, and MaxQ to meet and exceed Apple’s line. The silver box on table next to the LCD TV (in the picture above) is an in-development Quo media computer. It’s this kind of forward thinking that makes me feel like he’ll be able to succeed.

Specialness of the Hardware

I hate to disappoint, but Quo isn’t having their vendors build them custom boards (yet). So the boards in the LifeQ, ProQ, and MaxQ are tried and true Hackintosh boards with some slight modifications that Rashantha feels make them more Apple-like when using them. The only other thing worth mentioning is that the CPUs are overclocked to safe air-cooled ranges and the LifeQ, ProQ, and MaxQ all have different processors. His cases are simple but stylish and customized with his company’s art work. However, he did show me pictures of the configuration that he’s planning next, and the case was sharp looking.

How does Quo do OSX?

As legally as possible. Rashantha only installs OSX at the request and with the funds of his customers and even makes trips to the Apple Store in nearby Pasadena to purchase the retail copies. Customers are given the receipts, along with their copy of OSX. Updates should all work as they are supposed to but he cautions his customers to wait until he gets a chance to verify that there are no compatibility issues. In fact, while there, I witnessed a LifeQ being outfitted with Leopard, LogicStudio, and FinalCut, all removed from their shrink wrap. 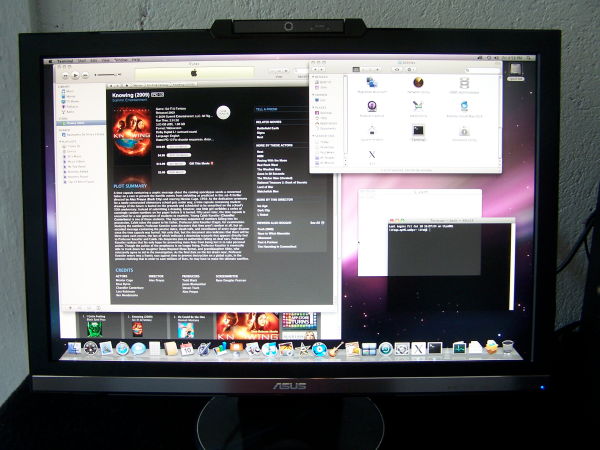 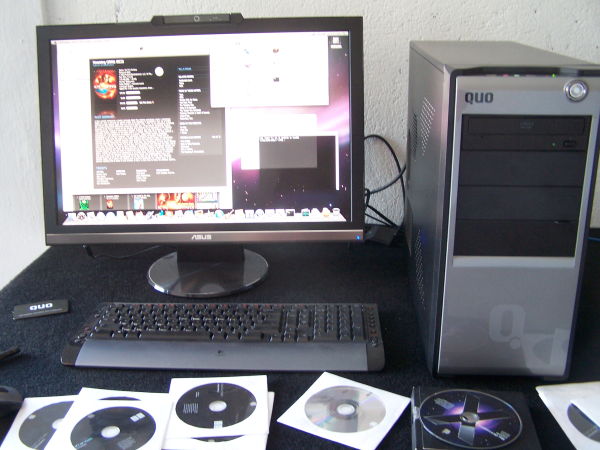 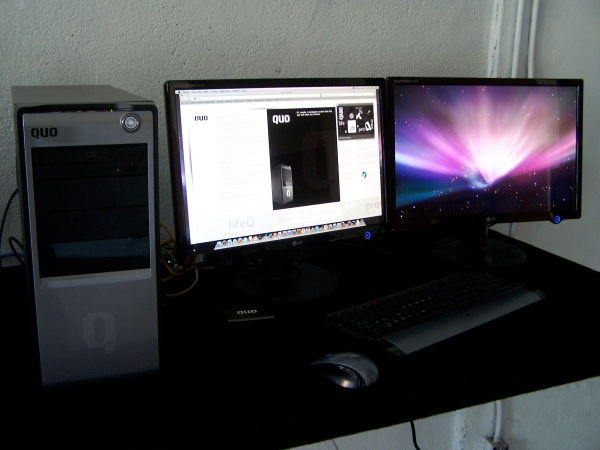 Another great thing about Quo (and Rashantha) is how much they care for their customers. Rashantha told me that he just sent out a hard drive to a customer who was having issues initializing a second hard drive in the Windows 7 rig he built for them. He did this even before he received the customer’s original hard drive and the drive they would receive would be initialized and ready to plug-in. Then, while we were talking, he stopped to take a call and spent 20 minutes walking through a customer over the phone who bought an OS-less machine and then decided to dual boot it with WIndows 7 and OSX. They were having troubles with the Windows 7 part of it. Rashantha feels this kind of commitment to customers is something that Apple, Dell, Microsoft and all the big players in the industry can’t compete with and he hopes this gives his company an edge.

I’m expecting Quo to be around for a while. I’m also expecting Quo to do quite well. They seem to have a steady flow of customers and they’re continually looking to expand. I was given a sneak peak at their future line and I was impressed. Their current line is just as impressive however, with LifeQ benching better than iMacs and their ProQ and MaxQ comparing well with the Mac Pro. I can’t believe how great of a guy Rashantha is and I feel like everyone should possess as good a heart as him. He’s got some tremendous support, he’s building the relationships to maintain a successful hardware line, and he’s got great intentions that he’s looking to act on. But he should, he’s looking to revolutionize what people expect from their computers and their computer vendors; he’s looking to change the Status Quo.