Home > Multimedia, AV > Review: The Video Mode on the Canon SX200 IS

I had no plans to write a mini-review for the Canon SX200 IS which I bought recently, but I can’t contain my excitement about its video mode, so I had to share. The story behind it is that after testing various digicams in its class, I concluded that this is the best HD video P&S digicam in the sub-$500 price range (not counting digi-recorders like the Sanyo Xacti). Read on for more info, and for some directly-out-of-the-camera samples to download and scrutinize yourselves. 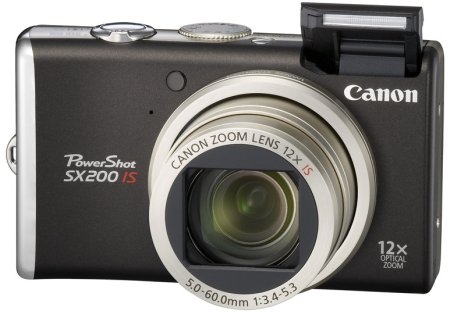 Things missing:
– No optical zooming while recording (you have to first zoom and then record). The more recent Canon SX210 IS model supports zooming while recording.
– No full manual control (the camera tends to record in crazy-high shutter speeds outdoors)
– No zebra support (you can first shoot a test still shot, then go to PLAY mode to check its histogram and then reshoot)
– No filter thread (adding an ND filter would help outdoors)
– No AVCHD .m2ts container rather than MOV (Panasonics do that)
– Not very good under low light (grainy)
– No 24p, 25p modes in addition to 30p
– No microphone jack, or audio gain control
– No ability to non-destructively join clips when editing in PLAY mode (transitions would be nice too)

Official music video shot with the SX200 IS. The video is heavily color graded in post. HD version here.

There were two reasons why I bought this camera, even if I had 6 other digicams in my closet. Firstly, because it has exposure locking. One of the tell-tell signs of amateur shooting is the exposure jumps when the shooter is panning left and right. I needed a smooth look for my videos.

Shot with the SX200 IS. The video is heavily color graded in post. HD version here.

The other reason was its color settings. This specific camera has enough color controls to put many real camcorders to shame. I am serious when I say that I was able to reproduce the “movie look” with this $300 digicam. Bring contrast/saturation/sharpness/skin-tone all the way down, leave R,G,B in the default values, and you will get a flat-enough image (to emulate film’s low contrast/saturation look) with no reddish faces (that most camcorders capture as, which is a sign of the “video look”). This “flat” look is also perfect for color grading! The SX200 IS is in fact one of the very few digicams that can hold up so well in color grading.

Shot with the SX200 IS in video mode. The video is heavily color graded in post. HD version here.

Just a warning: the SX200 IS performs its best outdoors. It’s true that it’s not a very good camera in low-light situations, but it has no competition in normal light situations. In fact, in pixel-to-pixel comparison from outdoors footage, it almost outperforms (the now legendary) Canon HV20 1080/60i camcorder. It only falls flat in low light. Check my video below for an example shot in the low light conditions of a music venue (band performing are the amazing Blitzen Trapper):

>
Shot with the SX200 IS in low light, handheld. No color grading. Click the “HD” button.

As for still picture performance, there are a number of other reviews to find online about it. The video mode usually doesn’t get a lot of attention by these reviewers, so that was one of the reasons I decided to write this article. Anyways, here are some pics at its “long end”.

So, download seven unedited clips here (105 MB), and have a look yourself (shot handheld, sorry). The clips were shot with my color settings as described above (and I suggest you shoot like this too if you own a similar digicam).

As a conclusion, if you need a cheap digicam with a big zoom that also shoots great video, consider this little camera. You won’t regret it. Unless you are itching for a video dSLR, in which case the Canon T2i is a better idea.