Geeks.com, home of many digital media players, sent in the Zune 120 GB for a spin. In the eve of the upcoming Zune HD release, how do these players stack up against the iPod? Read on to find out.

The Zune needed about 3 hours of battery charging when it first arrived. It then booted to its main screen in about 5 seconds. The touchpad allows you to scroll up/down, while it also operates as a 4-way button. There is also a “back” button and a play/pause one that also operates as “sleep” and “ON” button. Pressing the “back” and touchpad-down at the same time it completely turns off the Zune. The Zune goes to sleep automatically if it’s not used for about 5 minutes. 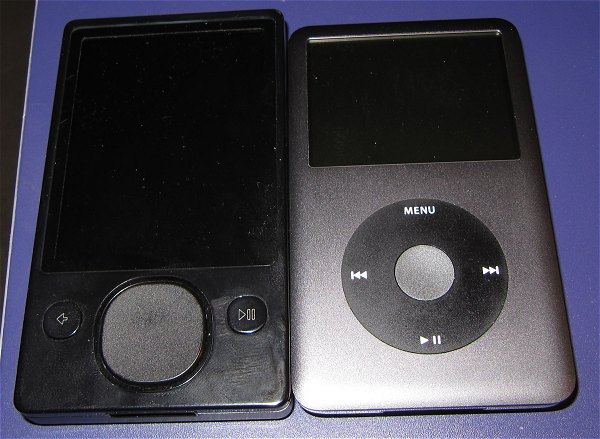 The first thing I noticed when the Zune turned ON was that its screen quality left something to be desired. Even if it’s a QVGA screen, it felt much lower resolution than that at 3.2″ size (the same resolution doesn’t look as rough on iPod Classic’s 2.5″ screen). Also, one interesting thing about the Zune is that Microsoft’s logo or name is not mentioned anywhere on the exterior of the device.

In terms of size, it’s bigger than the 120 GB iPod that my husband is using recently. The Zune design doesn’t have the same aesthetics as the equivalent iPod, but it is not distractingly big either.

The UI is pretty neat in terms of usability, but it is not very pretty, it feels a bit depressing at times. Nevertheless, the Zune has the second best usability in an mp3 after the iPod, and ahead of the Creative & Sandisk players. The media-playing UI has a Sony PS3-like interface where you can move horizontally for the main categories (e.g. artists, songs, albums, playlists), and vertically for the elements belonging to each of these categories. You can either use the touchpad to move through these elements, or by pressing the “down” touchpad button. The more you press, the faster it will scroll through the elements. However, this method is not as fast as the iPod Touch’s where you can simply select a character and directly go to elements that start with that character’s screen. Hopefully the new Zune will have this problem addressed, since it’s using a touchscreen.

Everything else is as expected in the player’s UI: right/left buttons get you to the next element, keep pressing left/right buttons will scrub through a song, etc. The only part I really disliked in the UI is that when I click to an album or a song, there’s one additional screen to get it to playback. I am more used to just select a song and it would start playing. Not so on the Zune. It annoyingly asks you if you want to add it to a playlist or not, or send it to a friend. I just want to play the song darn it…

The Zune can playback WMA, MP3, AAC, WAV. It had no problem reading my non-DRM iTunes purchased songs, and my free mp3 songs. Getting the album art right off of our iTunes library proved to be a bit more difficult. Apparently, album art added with the latest versions of iTunes posed no problem, but older ones were not recognized and I had to manually add about 200 albums’ images (out of 1500). H.264 videos for the iPod and WMV videos played without a problem.

I should note here that our iTunes app reports a 60 GB iTunes library (on NTFS), and our iPod 120 GB too. The Zune used 66 GBs of storage for the same amount of songs though. Maybe it’s using a weird filesystem, not sure what’s going on there.

The Zune also has a WiFi ability, but it’s only used either for syncing, or for “sharing”. You can share a song with a friend by beaming the song to his Zune for a few days so he/she can sample it. Then, the song becomes inactive and it’s up to your friend to either buy that song or not. The Zune comes with a “Marketplace” application that let’s you browse the top albums/songs, or search for a song you would like to buy (via WiFi). Unfortunately the input mechanism is pretty annoying, and that makes the music store experience pretty dull at the end.

Two more features on the Zune are its FM radio ability which works well, and five games (Checkers, Texas Hold’em, Soduku, Space Battle and Hexic). Battery life for music playback is rated at around 30 hours which is pretty good. Audio quality was top notch too. I liked the fact that there was gapless playback too.

In conclusion, I don’t see the Zune replacing our iPods at home, but it’s a nice complementary player. In fact, I see more value in also purchasing the Zune Home AV Pack v2, and use its audio-out interface to connect to our stereo system. Given that we now have 60 GB of music and a lot of it is iTunes purchases rather than CDs, we just need a way to listen to that digitally-purchased music via our big speakers in our living room. The Zune 120 GB, with its bigger readable screen proves to be a good fit in that scenario.