A little over two weeks ago, Microsoft released Microsoft Security Essentials, a security software suite protecting users of Windows against malware and viruses. The company has released data about the number of downloads and fixed infections, and the results are encouraging.

In the first week of MSE’s availability (September 29 to October 6), the program was downloaded1.5 million times (after week two, 2.6 million times). In its first week, MSE made almost four million detections on a total of 535752 unique machines, so it seems like it is doing its job.

Over half of the detections were made on Windows XP machines, and just under a third were made on Vista machines. The remainder detections were probably on Windows 7 machines. Another interesting tidbit: the most popular Windows version among MSE downloaders is Windows 7, and one third of these Windows 7 installation is 64bit. The 64bit version of Windows (since XP) has additional security measures such as Kernel Patch Protection.

All this data comes from Microsoft’s SkyNet SpyNet, which collects information about malware to improve future detection measures. “Providing high quality detection capabilities requires that we collect information regarding malware when detected so that we can properly react to deliver the level of PC protection we are promising to customers,” a Microsoft spokesperson explained, “Users can change the membership level at any time from basic to advance and back however to continue using Microsoft Security Essentials, they need to remain a member of this online community. More information about Microsoft Security Essentials collection and use of information can be found in our privacy statement.”

It seems like the tool is doing its job. Due to antritrust worries, MSE can sadly not be included by default in Windows, despite the fact that it is by far the least obtrusive and invasive antivirus tool out there. The entire install package – not a downloader, but the entire package – is only 7MB, and takes up little to no system resources while doing its thing. 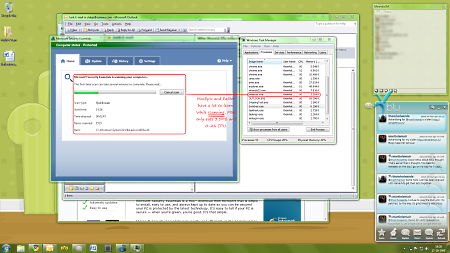 Everybody would be better off if MSE had been a default part of Windows 7. Oh well, I guess the financial prospects of companies like McEpic and Failtec McAfee and Symantec are more important than users’ security.