PureMobile sent us in the GSM version of the HTC Hero, one of the most popular Android-based smartphones out there. There are already a number of in-depth reviews about this phone out there (here’s one), but here’s my own take on what I liked, and what I disliked.

Before we start, let me say right off the bat that my husband works for Google, at the open source side of Android (not directly with the operating system’s development). However, this is not a “with Google” phone like the T-Mobile G1 was, it’s an independent HTC-only phone. And most importantly, it does not use the default Android UI (UI that I will be mostly discussing), but HTC’s own flavor. So I felt that I could give it a whirl, and see if it can compete with the iPhone (despite my husband working for Android, the iPhone has been my personal phone choice so far). 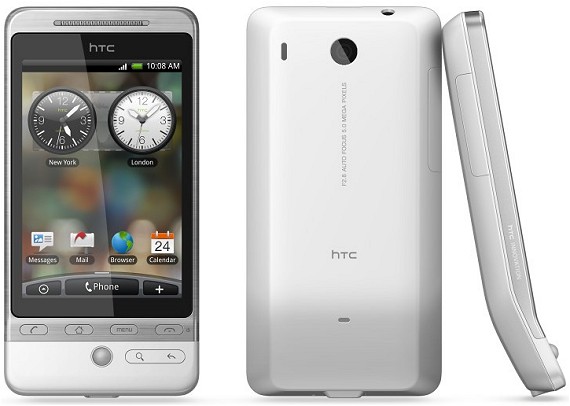 I love the way this phone looks. In some ways, it reminds me the design of the original Motorola cellphone! But in a good way!

I absolutely hated the G1 because of its “Jay Leno” chin, but it is not a problem on the Hero because it’s so thin! On the G1 I simply could not type because my small hands could not go over the chin and easily reach the keys at the bottom. But on the Hero this is not an issue, because the LCD is on a higher ground than the hardware keys are on the G1, and the Hero is thinner anyway (so my small hands have an easier time going around it).

The device also feels very nice in the palm. It is less wide than the iPhone, and it can rest on my palm with ease.

The Hero comes with the standard Android buttons, plus a dedicated search button. I wish that the buttons were a bit bigger and easier to hit though. Another problem are the volume buttons on the left side that are way too easy to hit. While grabbing the phone from the table, 2 times out of 5 I would be pressing the volume buttons by mistake. They should have been more rigid and more difficult to get pressed.

Battery life is about 3 days with light usage (considering that this is an always-online, syncing with Gmail, phone). Phone call quality is top notch.

The camera is ok (samples), and there are some nice white balance and other settings while shooting. I can’t really ask anything more regarding the still capabilities (except maybe a flash light). The video mode is a disaster though at 15 fps CIF resolution (sample).

As mentioned above, HTC has written from scratch their own UI on top of Android’s. Some components are completely replaced, other just modified, other are vanilla. Basically, HTC has rewritten the launcher application, the Phone/Contacts application, the virtual keyboard application, and quite a few new screen widgets: twitter, calendar, weather, pictures, contacts, email, music player, browser bookmarks, “footprints” (a traveling app), and more.

There are 7 “virtual” screens on the HTC Sense UI, there are 3 in the default Android home screen. You can easily fill up these virtual screens with widgets and shortcuts. The widgets are very nicely designed, with beautiful icons, animations and interactive elements. You can simply flick through images or emails with really nice animations for example. Originally, the HTC Sense UI had speed problems doing all that, but the latest update (that the phone comes with by default) fixes a lot of these problems.

The virtual keyboard is definitely better than Android’s default one. Its multitouch ability and easy way to switch between languages, and auto-correction, give it the upper hand. However, the HTC virtual keyboard is not without its bugs, creating incompatibilities occasionally for some apps (e.g. an SSH app we tried).

The phone screen was re-written as well. The dialing screen is now rendering on top of the contacts, meaning that the dialing screen takes half the screen, and you can just scroll the contacts list on the other half of the screen. The same application includes a full screen view of all your Gmail contacts, ability to edit these, create “teams” of contacts, call history, and get this: Facebook updates. Unfortunately, Facebook doesn’t work properly for me (info below).

The music player is re-written too. It takes a while to load the album art of all the music in the cache, and until it does, scrolling through the music list can become slow. But after it does load, it works wonderfully, and all my album art was recognized (something that is not true for Nokia phones, and even Sandisk players). It can play MP3, AAC(AAC, AAC+, AAC-LC), AMR-NB, WAV, Ogg Vorbis, MIDI and Windows Media Audio 9.

The HTC Hero is the first Android phone to come with Flash, but it’s very slow, doesn’t work most of the time (e.g. vimeo), and when it does work (e.g. Youtube) there’s already a dedicated app for it. So basically that Flash port feels very much like a throw-in.

Overall, the HTC Sense UI feels more modern, more impressive and cooler than the default Android UI. It’s true that while I did try to get into Android in the past, its UI was holding me back. On the iPhone, multi-touch and the very consistent usability were always big features to me; Android doesn’t exactly have that. HTC Sense is not as polished and consistent as the iPhone either, but it fares better than the default Android.

There is no “additional languages” installation ability. However, the situation is more complex than that. When I used my Greek SIM, the phone asked me if I would like to change the language to Greek, and I said “yes”. It made everything Greek, as it was supposed to, but when I am going to the language settings, only Polish and English are available there (as these are the phone’s original languages). I mean, if the phone comes with all these languages pre-installed (it certainly didn’t download anything off the web to enable Greek), why not let me make “Greek” the “official” language on the phone?

Unfortunately, while the above might not sound like a big problem to you, consider the following: for some applications that get their text from the web, if that text is not in Greek, then it doesn’t show it to me at all. What I mean is this: Comments in the application pages of the “Market” application DO NOT RENDER on this phone when it’s set to Greek. It would ONLY render comments, and let you read them, if the comments were *written* in Greek! And my friends’ Facebook updates are also not loading at all because they are not written in Greek (I presume)! While I understand the need to hide text of weird languages from the user (although this is debatable usability), I don’t agree that this should also be done for plain English. Heck, most Greek people can read English, thank you very much.

The launcher comes with a big button that gets you to the Phone screen, and a smaller button to open the application launcher window. Personally, I am more of a PDA-like user rather than a caller, so it would have been nice to be able to exchange the position of the two buttons (so the app launcher has a bigger button).

The Contacts application loads all the gazillion of my Gmail contacts that I don’t want there. It doesn’t try to only show the contacts that actually have a phone number, I am ending up having thousands of “contacts” that have emailed me at some point in the past. People that I don’t really know. It’s impossible to find a true contact in that screen just by flicking.

There are two ways to lock the phone’s screen: one is with a special visual pattern that you can draw (part of standard Android), and the other one is simply to double-click the “menu” button, or slide down the whole screen. Unfortunately, that second way is way too easy to unlock the phone by mistake. The slide-down way should have been slide-horizontally-a-small-icon like on the iPhone, because right now, even by touching the screen on your trousers can cause it to unlock the screen.

There is no usable VoIP application right now for Android, and this has an impact for me, since I use it to call my mom in Greece. The single one popular SIP app that’s available for Android and kinda works, requires to use the developer’s PBX rather than your own SIP provider directly (something that I am not willing to do because there are too many hoops between countries adding to the lag). Update: SIP Gizmo5 has trouble registering with the SIPdroid application on my network. Manages to register only once every so often.

Skype is a disaster on Android, as it doesn’t work via Wifi-only, it requires that you enter your cellphone number and works through it (something that I don’t want to do either). Android 1.6 is the first version of Android that comes with VoIP API hooks, so hopefully Skype and other SIP apps will get updated soon.

The HTC Sense’s Bookmark widget does not sort the widgets the way you request the web browser to do so, so you end up with only one sorting order: chronologically created. And because most people would create the bookmarks they most care about first, these will show up at the bottom every time, requiring the user to scroll each time. Poor thinking here.

The HTC Hero can’t play iPod videos (DRM-free, of course). It is able to playback MP4/H.263/H.264/WMV9 on paper, but in reality, it required 480×320 or smaller resolutions, while I already have a few iPhone/iPod-encoded videos at 640px wide widescreen format. I mean, the Hero should have been able to play these (the Nokias can, and besides, it should always be a strategic target to be able to play the same formats as the iPhone/iPod).

The Weather widget has no option to follow the weather for the cities of Nancy (France) and Preveza (Greece). The iPhone uses a service that does have support for these cities.

No “week view” in the HTC Calendar app.

No Amazon MP3 application. USB is the only way to add music to the phone.

The “pinch” on the web browser is not great. It is not as smooth and precise as the iPhone’s.

The “Market” app is a disaster. Although the newer version of the app (e.g. v1.6) is a bit better.

Overall, the HTC Hero is so far the best Android phone for me (not talking about the Motorola Droid, since it’s not out yet). And the announced update is obviously going to bring new life to this Android 1.5 device.

The question is: would it knock me off the iPhone? And the answer is “not yet”. It’s not as polished as the iPhone. However, if my iPhone was to stop working tomorrow morning, the HTC Hero would be the phone I would reach out first to use instead. It’s dangerously close!