With the explosion of (mostly Canon’s) video HD dSLRs in the last few months, purchase decisions for video editors have shifted, depending on which editor can deal with h.264 the best way. Until recently, users had to either use “proxy” files, or transcode to an intermediate format. Then, Adobe’s Premiere Pro CS5 came in to change this by being the first video editor to fully utilize nVidia’s CUDA technology and achieve real-time playback for Quicktime dSLR, and AVCHD footage.

This is by far the main new feature on the video side of CS5. With a supported nVidia GPU you can easily get real-time support not only for “naked” h.264 footage, but also when using some effects. To get advantage of the full acceleration you need an nVidia card with 768+ MB of VRAM. Non-supported nVidia cards that do have as much RAM can be supported via a hack. We asked Adobe why such a high requirement of VRAM, when decoders like CoreAVC don’t require as much, and this is their response:

“There’s nothing else on the planet using CUDA the way we are. CoreAVC uses the GPU for one task – decoding a particular video format. We are using the GPU for handling real-time effect filters on multiple streams of HD, 2k, or even 4k footage. This isn’t just one task – there are over 30 different real-time effects. Doing this requires more RAM.”

The good news don’t stop there. The re-written h.264 playback engine (now called “Mercury”) is very fast in “software” (DVXA?) mode too. While with CS4 we’d get about 10 fps with 1080p dSLR footage on our Quad Core PC, with CS5 we get full speed in “draft” mode, and about 16 fps in full 1080p mode. These are speeds that my own video editor of choice, Sony Vegas, can only dream of right now. Stability-wise the Quicktime formats are more stable on Premiere Pro than on Vegas, however, I did manage to crash the whole Vista PC when Premiere Pro froze while switching from the “Editing” to “Color Correction” screen mode.

Other new features on Premiere Pro CS5 include native support for AVCCAM, DPX, XDCAM HD 50, and AVC-Intra. The RED format has seen an update too. dSRL resolutions/frame rates are now supported out of the box in the project settings. Professionals now can read/save project formats for FCP and Avid MC. This is a key feature for studios that must send whole projects to colorists, or effects and graphics artists, who happen to use different software than CS5. Also, Premiere Pro CS5 comes with support for Adobe Story’s and Adobe OnLocation’s metadata, making it easier putting together a first rough cut.

Finally, I found a bug with the h.264 encoder on CS5. If you check the “PSP” MP4 container type (instead of the “iPod” one), the created h.264 video won’t play with any application I tried it with (I tried CoreAVC, Quicktime, and VLC). CS4’s “PSP”-type MP4 h.264 files used to work just fine. I generally prefer the PSP type because I always export for my Sony PS3, which also prefers that type of MP4 h.264. 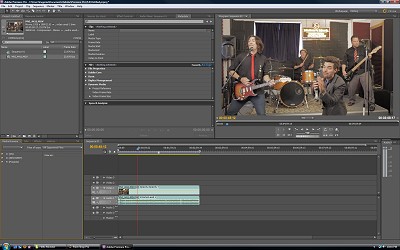 Premiere Pro CS5 loading a clip from my upcoming project, a music video for the band “Hello Monster”

On the After Effects CS5 side, the biggest new feature is its 64bit support. Along the welcoming previewing speed abilities because of 64bit, this also means that your old 32bit plugins won’t work anymore. Thankfully, many plugin providers have already updated their plugins to 64bit, but many free or cheaper ones will probably never work again.

The included third party applications/plugins Mocha & Mocha Shape, and Color Finesse have been updated to versions 2 and 3 respectively. I personally did not like much Color Finesse v2 (it was crashy in addition to its few abilities), but v3 seems to be going to the right direction, with added support for LUTs. The Digieffects FreeForm companion app is new to the bundle: it allows for a layer to be manipulated in 3D space.

The Roto Brush is a very impressive tool: you create a very broad/generic stroke to tell AE where the foreground and background is. The app then can create a matte with an alpha, automatically. It’s not a perfect tool, and it has trouble with some blurry/fast sequences, but the fact that it generally works it already sounds like an engineering marvel to me.

Overall, CS5 was a very strong release for the video side of things. More so than the usual favorite of each major Adobe release, that is Photoshop. If only Adobe pays some attention to the kinds of video formats Photoshop is able to export at (it still can’t use all Windows-wide installed encoders, e.g. Cineform), and the usability of After Effects (when using too many layers) can be daunting. Premiere Pro is not super in ease of use either. In fact, user experience is the only reason why I still use Sony Vegas. If Adobe tackles that issue in CS6, then they’ll have an even bigger winner.

FTC Disclosure. Per the new FTC guidelines regarding bloggers and disclosure: Adobe sent me the CS5 suite about a month ago, free of charge, per a request I made to them for a review unit. I report my findings to other users, and I’m calling them as I see them.