Geeks.com, as usual a great source of Kodak digital cameras, sent us a Kodak P850 for review. The P850 is a current camera in the Kodak lineup, announced exactly a year ago. It’s the lower model in Kodak’s “performance” P range (the other ranges are the entry-level C cameras, super-zoom Z cameras, and pocket V cameras). As a member of the P range, the P850 has a few features that are only found in some high-end point-and-shoots and in DSLRs, e.g. the ability to record raw files, or to use an external flash via a hot shoe. Note: OSNews is a broad tech site (and has been for years), such non-software reviews are welcome here even if our focus remains towards “system software”.

As Geeks.com had indicated, the camera was a refurbished one, and (as we’ve experienced several times in the past) the only hints that it had been refurbished were the generic box and a “refurbished” sticker on the camera; without a doubt Kodak is serious about bringing the camera back to their original specifications when refurbishing them.

There are plenty of digital cameras from all manufacturers that offer different features, at different price points. Whenever I consider a digital camera, I try to consider how the manufacturer intended to position them on the feature/price curve, and how they succeeded in that goal. That is why I don’t rush to compare specifications between cameras. 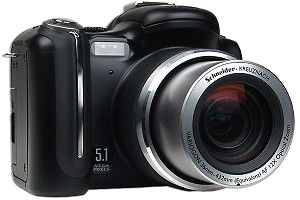 The P850 is priced aggressively against its competition, being listed below $300. In fact, there are very few cameras with a 10x or 12x zoom and optical image stabilization at that price, and none that offers raw shooting or a hot shoe.

So, what market does Kodak target with this camera? I’ve struggled for a while trying to find an answer to that question. It’s certainly priced far too low to compete with DSLRs (the cheapest DSLR costs about twice as much, and that’s without a lens. Adding image-stabilized lenses that cover the same range of angles makes the price sky-rocket). On the other hand, its distinguishing features (flash hot-shoe and raw shooting) are an indication that Kodak intends the camera to be used by photographers aspiring to do more than simply point and shoot. The best description of the market for this camera is that it might be the second camera of someone who already uses a DSLR but needs a smaller and lighter camera, and that’s how I’m going to review it.

By DSLR standards, the P850 is very small and very light. In fact, it weighs less than a pound in “ready-to-shoot” configuration, and it is smaller than even the Canon Digital Rebel XT. While not really intended to be a pocket camera, it does fit in the side pocket of my cargo pants and shorts, but I wouldn’t leave it there for a long hike.

What I quickly noticed about the P850 when I started to handle it is the sheer number of buttons that it has. There are 13 buttons, one more than on my Canon 5D DSLR, and their layout doesn’t seem to follow much logic. The autofocus control is on the top-left, the auto-exposure control is on the top-right, while the AF/AE lock is on the back. There is a programmable button on the top-right, but some of the functions that would be likely to be assigned to such a button (e.g. explicit AF) aren’t available. While the layout of the buttons is sub-optimal but can easily be learnt, the tactile feedback of the buttons is very poor: the buttons are very small in diameter and are mounted flush with the surface of the camera, which makes them hard to feel and harder to press. Because they’re mounted close to one another and there’s no difference in their textures, it’s easy to press the wrong button. Michael Reichmann (of Luminous Landscape fame) always tests cameras with gloves, because he knows he often shoots in cold conditions, and the P850 wouldn’t pass his glove test. Finally, the location of some of the buttons makes them uncomfortable (exposure) or impossible (focus) to reach without taking the eye away from the viewfinder and shifting the hand positions; some others (share) are in locations where they tend to be pressed by accident. That’s certainly a disappointment.

In addition to the buttons, the P850 has several other controls. There’s a master mode dial at the top, with the usual PASM, green, scene and movie modes, plus 3 sets of custom settings. Having 3 different sets of custom settings is certainly nice to have. In fact a common complaint about the Canon 5D is that there’s only one such set (and plenty of available space on the master mode dial). Just below the master mode dial is the zoom control, which feels unpredictable: from the widest setting, a quick flick to the right causes the zoom motor to emit some noise, but the angle of view doesn’t change. From there, it takes two quick flicks to the left to get the zoom indicator back to the starting pint, and at each point the zoom motor emits some noise but the framing doesn’t change. Just next to the zoom control is the command dial. Combined with the set button, it is used to change various shooting parameters like aperture, shutter speed, sensitivity, exposure compensation, flash exposure compensation. Unfortunately, the dial is too small, made of hard plastic, and mounted too deep inside the camera, so that it’s somewhat hard to use. Finally, much further down the back of the camera is a 5-way joystick, which is used to select the focus/meter point while shooting.

Besides the placement of the buttons, there are in my opinion a few issues with the ergonomics of the camera. With the size of my hands, trying to tightly grip the camera like I usually do in order to avoid camera shake, I end up covering the passive AF sensor, and the loop for the neck strap uncomfortable pokes into my hand. I guess that the designers expect people to hold the camera delicately with their fingertips, not to wrap their hands entirely around the camera body. Also, I don’t understand why the camera doesn’t have a standard 52mm filter thread on the extending inner zoom barrel itself, and requires to buy a separate adapter which uses 55mm filters. With that design, leaving a filter on the camera makes it significantly larger even when the camera is off. I understand that having a thread on the fixed outer barrel allows to use a heavy wide-angle converter, but even with a 52mm thread on the inner barrel there shouldn’t have been any problem to use a 58 or 62mm thread on the outer barrel.

Image quality is somewhat lower than on a DSLR, which shouldn’t surprise anyone. The size of the sensor is about 35 times smaller (in surface) than in my Canon 5D, and the pixel size is 2.2 microns (i.e. 11500 dpi). Such small pixels each receive very little light, therefore creating images that are somewhat noisy, and even the smallest of lens aberrations or misalignments will be visible in the final picture. That being said, the resulting images are certainly printable at 8×10, especially the ones shot at the wide end at the lowest sensitivity, and there’s no doubt that using an optical zoom is a far better option than a digital one. The camera has an optical image stabilizer, an unusual option for a lens with such a zoom range at that price point; the stabilizer works, and I consistently got sharp results at the long end of the zoom at 1/125s while holding the camera with my arms extended and framing with the back LCD. I noticed while zooming that the lens is not a true zoom, i.e. it doesn’t maintain its focus while changing the focal length. It’s especially visible when zooming out from the telephoto end, especially since zooming is actually fairly slow. The camera uses a hybrid autofocus system, using both TTL contrast detection and a passive AF sensor.

Auto-exposure seems to try to aggressively expose as much as possible in order to avoid noise, which unfortunately often results in overexposed highlights. Worse, the histogram sometimes suggests that this is not the case. There is a flashing warning for both underexposure and overexposure in one of the review modes, but it’s several clicks away and takes a while to actually start displaying.

Finally, the two features that distinguish the camera from its competition are only moderately useful. Raw images are very large (8MB), which indicates that they’re not compressed at all, and the camera freezes for several seconds while writing such a file. Instead of using standard DNG files, Kodak uses a proprietary KDC data format (download a KDC Kodak RAW picture here). The Kodak software that reads those files is quite poor. Recent versions of Adobe Camera Raw can read KDC files from the P850, while the command line utility DCRAW handles them well too (you can use CinePaint or UFRaw under Linux to manipulate these RAW images). The flash hot-shoe, which would have been very useful if it could be used with Canon and Nikon flashes (and possibly others), is limited to a single Kodak model, the P20. To redeem itself, the P20 is both affordable and powerful, and with its tilt head will allow to bounce off a white ceiling (or even a pocket bouncer) for more natural look indoors.

Like all Kodak cameras, the P850 comes with some internal storage, which is great to have when you leave home without a memory card. 32MB allow to store approximately 26 pictures in 3MP standard mode, 9 pictures at the highest JPEG size and quality, or 3 pictures in raw mode. Unfortunately, if you leave home without the dedicated battery (which has to be charged on a separate charger), you’ll be out of luck as the camera can’t be powered from standard AA batteries.

Overall, the DSLR owner will be able to take satisfactory pictures with the P850 and print them at 8×10, as long as there’s no need to push the camera to its limits. The ability to use a powerful bounced hot-shoe flash means that the P850 will take excellent pictures indoors. The small and lightweight construction and the very long telephoto will make it perfect for photos of wildlife during mountain hikes.