Our Nokia friends were very generous to send us over their newest Internet Tablet, the N800, for a review. Read more below about our experience with this Linux-based mobile gem.

The N800 is an evolutionary step above the older model, the N770. It features a (rumored, faster 320 Mhz ) TI CPU, two SD slots, 128 MB RAM, 256 MB flash storage, 4.1″ 800×480 touchscreen, WiFi, Bluetooth, 3.5mm headphones jack and mini-USB port. On the top of the device you will find the zoom buttons, the fullscreen on/off button and the microphone while on the front of the device there is a 5-way joypad and 3 additional buttons: close application/window, application’s menu and task-switch. On the left side there is a retractable VGA video-call camera. Below the device you will find a very practical kickstand, which is very nice if you are using your N800 to watch movies. 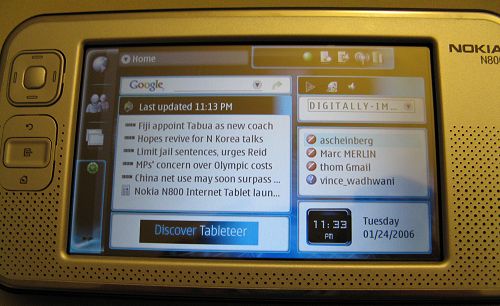 In the box we found an SD placeholder card (miniSD 128 MB included), a USB cable (for data exchange only, recharging didn’t work), a second stylus, a power adapter (same one as in the E61), a protective pouch, a 3.5mm earphones with a VoIP call/reject button and some manuals. The stylus is very well-done, it is hefty and feels good in the fingers. The pouch is just a thick cloth to protect the device, but does not protect from accidental screen touches, which have the effect of turning the screen back on — even after having locked the keys and screen. In order for the screen to not come back ON again after having locked it, you should wait at least 30 seconds without you or anything else touching it. I would have liked this device to have a proper “hardware” slider lock like the iPods or some PocketPCs do.

The screen has seen an upgrade is terms of quality. It still has the same res/size, but the screen is more clear and easy to read. Upgrade has seen the RAM (128 MBs from 64 MBs), while there is now easy to use swap support to the SD card when running out of memory (e.g. on some huge web pages). The speed of the device is also higher than in the N770, everything feels a bit faster now. The two SD slots (reportedly) support the SDHC protocol now and this means that you should be able to go up to 16 GBs of flash storage using the N800. 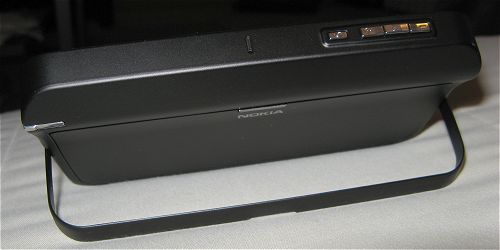 The best thing about this Internet Tablet is its WiFi reception. I was absolutely amazed to see it discovering about 15 WiFi hotspots around my house, while the second strongest WiFi device I own barely manages more than 5 or 6 (my Powerbook only finds 2-3 for example). We have city-wide free WiFi in my town since last October via MetroFi, but my apartment faces in the other direction and it never gets signal from their access points. And yet, the N800 is the only device in my home that is able to “see” MetroFi.

As for getting Internet access via Bluetooth and a cellphone, this worked well with the Nokia phones I tried. It was more difficult to make it so though with PocketPC smartphones. The problems started when I tried to send some files over via the OPP profile. I was able to send two before the BT stack crashed and wouldn’t accept any other files. For the files that it did accept, speed was good, averaging at about 80 KB/sec. Using the N800 file manager you can “browse” your Bluetooth devices via the FTP profile. Unfortunately, there is no A2DP/AVRCP support to listen to music wirelessly and no HSP/HFP support for use with the VoIP applications. On the bright side, you can use a Bluetooth keyboard with the N800.

The next two great things in the N800 are the very nice, loud sound that I got using my high-quality headphones (better sound quality compared to any Nokia phone I have ever tried) and the kickstand. The kickstand has two “levels of sitting”, allowing the N800 to “sit back” and make it easy for the user to watch a movie. Initially I had my doubts, but while using it I learned to love it. 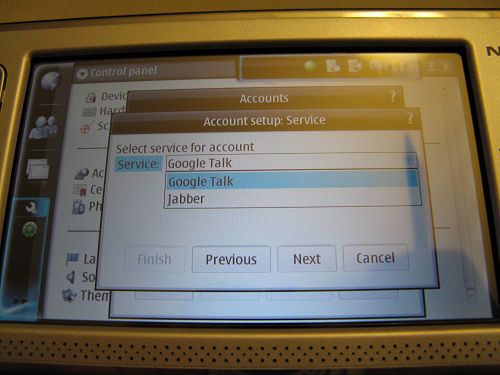 The battery life is pretty good too: it reportedly manages 10 days in always-ON standby (the device is actually ON, and with only a few hardware elements OFF), and it managed here about 5 hours of WiFi usage (screen in low backlight mode). It is my estimation (I only had the device for just a day and a half so far) that having the Gizmo or GTalk clients ON and leaving WiFi ON while in standby mode, you should get about 4-5 days of battery life which is better than the second best such device, the Nokia E61. My Nokia E61 has GSM OFF as I use it exclusively as a SIP VoIP device with GizmoProject and manages about 3-4 days of battery life (with WiFi OFF and GSM ON it can last 15 days as the E61 has one of the best battery lives out there, but WiFi is by design more power hungry than the GSM or Bluetooth antennas).

The software has seen an upgrade too, including Opera that now has Macromedia Flash support. Unfortunately, both YouTube’s and Google’s Flash videos are unwatchable because of the lower CPU power, and this is really a shame, because I bet the biggest reason why Nokia had to work with Adobe and ask them and port Flash to the N800 is because of YouTube… (update: speed is better in latest firmware) You can use a Windows server running Orb to stream Flash video in the .ram format which it plays back fine, but this is not easy to do and can not be expected from normal users to do so. Opera crashed twice while using Hotmail, but other than that it worked admirably. It allows for (legit) popups/windows to open and it has full javascript support among other well-known Opera features.

There is a GoogleTalk client in the N800, it works really well. There is also a Notes application, a Caclulator, an imap/pop3 email client, RSS reader, file manager, image viewer, world clock, PDF reader an application manager, some games and more. Unfortunately, the Maemo 3.0 platform is not fully compatible with Maemo 2.0 and so most of the 300+ applications available for the N770 do not work in the N800. So far, there are only about 10-15 applications available for the N800. I installed the GizmoProject client, a VNC client, the GPE PIM and a game. I couldn’t find a screenshot applet for it though in order to get native shots (it was reported that the older applet build was working but it was not present in the repository that was supposed to be, so I couldn’t find it). Installation is a breeze in Maemo using Nokia’s dpkg front-end, but if you want to add more “bora” repositories things get ugly with broken dependencies (e.g. GPE Calendar 2007) and it requires some understanding of what is what when setting up a new repository. 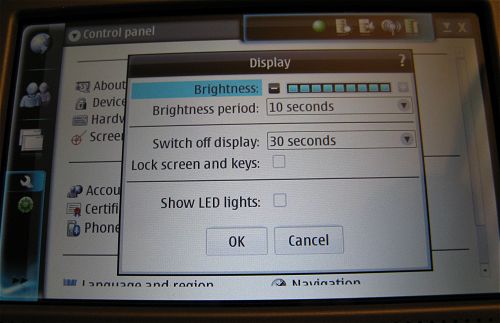 The Media Player can playback WMA, MP3, AVI, RAM, RA and 3GP files, but unfortunately, it would not playback OGG audio or standard MPEG-4 videos, similar to the ones captured by all modern cellphones (update: MP4 somewhat fixed in the new firmware). I surely hope that at least MP4-BASIC support is fixed in an update, because it is a must-have, as the Nokia N800 is meant to be used in many ways in a conjunction to a mobile phone. Currently, the Real Player-derived engine that drives the media player does not support the MP4-BASIC and MP4-IMPROVED formats (and it has the same limitation in Motorola’s touchscreen Linux phones too). Personally, I would prefer Nokia to move away from Real Player (or just use it only for RA/RAM) and instead use mplayer and also port the mplayer-plugin for use with the Opera browser. This only only will allow for broader codec support (after licensing them of course) but for WMV/QT support inside web pages that currently is not possible. This is an internet tablet after all.

The on-screen keyboard is easy to use, and it allows more than one languages to be used. I was switching between Greek and English very easily, very fast. There is also handwriting support, but I never bother with it (I have lost all hope in handwrite, no matter the platform). A nice cool thing is that if you touch an editable widget with your finger, the N800 will recognize this and it will give you a big FingerPad to type instead of the smaller virtual keyboard. Very convenient and clever. 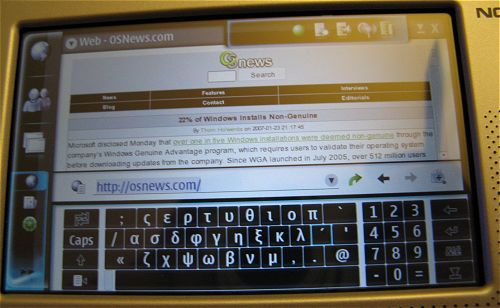 The overall interface is interesting, cute I would say. It is very responsive and pretty stable too (I did have a random reboot today though). But I see a lot of wasted pixels when in windowed mode that they could be used to offer more real screen estate to the apps. Other usability and UI problems are addressed pretty spot-on here.

The device is really nice to hold in the hand, it feels steady, well-manufactured. It looks sexy too with this modern metal that it’s made of. However, there are two things I dislike in the design. First, the retractable/rotate-able video-call camera: It is so far away from the screen, that only 2/3s of myself appears in the picture when I hold the N800 directly in front of me. This is a problem if you are in a video chat session with someone because you have to constantly adjust yourself in an uncomfortable position so you are in the visible viewing field in your friend’s screen. Instead, the camera should have been placed directly above the joypad, and be rotate-able the same way some cellphones have it (e.g. the LG U8500 and the Samsung D820). Additionally, the camera can only be used with other N800 GTalk users for video-conferencing and no other application can use it so far. 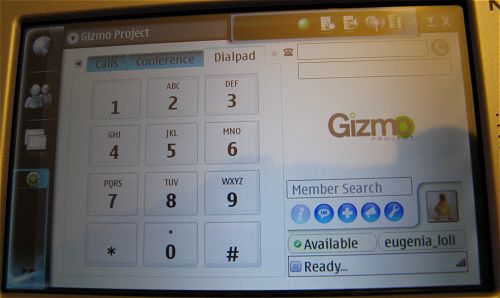 The second thing I don’t lile is the right part of the device (currently housing only the right speaker) that makes it unnecessarily long. I much prefer the device to be a bit thicker instead of being longer as it would fit in more pockets this way. If the designers really needed the device to be that long, I would have much preferred to use that extra space (and possibly make the device a tiny bit taller) and make the screen 5.5″ ultra-widescreen at 1024×600 because more and more sites today don’t fit anymore in the current 800×480 screen (e.g. Digg, CNN, Y!, C|Net etc).

Overall, the N800 is a good evolutionary step over the N770, but not without its flaws. If you want to get one of these two babies, get the N800 if you can, and only opt for the N770 if you find it in a very low price. For the price, at $400, I think that the N800 is a good deal considering that you can browse the web in a respectable way without having to carry with you heavy laptops. Regardless, we will make sure to revisit the device in the near future after updates and patches have been released from Nokia or when Skype has released their software for it.