At its Worldwide Developers Conference today in San Fransisco, Apple discussed its upcoming operating system, Mac OS X Leopard. As always, Steve held his keynote speech wearing his well-known ensemble. The keynote dealt mostly with Leopard, while keeping the most interesting part for last. Read on for the details. Update: Read more for a screenshot of Safari running on Windows… Barely.Games

The first series of announcements were all related to gaming. After Electronic Arts’ chief Creative Officer Bing Gordon announced EA’s commitments to the Mac platform, ID’s John Carmack came on stage to disclose details on ID’s projects for the Mac; more will follow during E3.

Jobs then moved on to discussing 10 of the 300 new features coming in Mac Os X 10.5, Leopard. Firstly, Leopard will sport a unified look; gone will be the days of having 10 different looks on your Mac OS X desktop. Secondly, he introduced new features for the dock and the desktop.

The dock sports a new 3D look (anyone familiar with Sun’s Looking Glass will know what it looks like), and will now feature something called ‘stacks’. From the the live text feed, it was quite difficult to get an idea of what stacks are, but I understood that one stack can contain all items related to something; i.e. you can throw all things related to “Vacation 2007” into one stack, which will expand its contents upon click. The menubar atop the screen is now transparent.

The Finder has also seen an overhaul. Cover Flow has been integrated into Finder, so you can browse directory contents in Cover Flow fashion; this includes the slides of a Keynote presentation or running videos. The Finder’s sidebar has search built-in, and users can store custom searches in it as well.

.Mac now allows you to browse your Macs even over the internet; for instance, you can browse the contents of your Mac Pro at work, using your MacBook at home. Another new feature is Quick Look, which allows you to preview any type of file; a plug-in architecture is in place to allow for expendability. Quick Look can run in full screen too.

As was already known, Leopard will be completely 64bit, from top to bottom. The operating system will come in one version for both 32bit and 64bit applications. Jobs also demoed other known features, such as Boot Camp, Core Animation, virtual desktops Spaces (interestingly, audio from one virtual desktop is muted when not selected), and new features in Dashboard and iChat. Time Machine was also demoed, but no new information about it was given (i.e. if looking up older versions of individual files requires a different harddisk/partition).

After the expected (and deserved) pun at Vista’s 235748 different versions, Apple set the final release date in October.

As the final bombshell, Jobs announced Safari for Windows. Safari 3, which will come with Leopard, will also be available for Windows XP and Vista. Jobs showed some benchmarks which showed that Safari on windows was faster than Internet Explorer 7 and Firefox. Safari on Windows will be available as a public beta from Apple’s Safari website.

Update: As this screenshot shows, the Safari on Windows Beta still requires some major work. Memory usage spiked after only a few seconds of browsing on both my Vista laptop, as well as Eugenia’s XP machine. 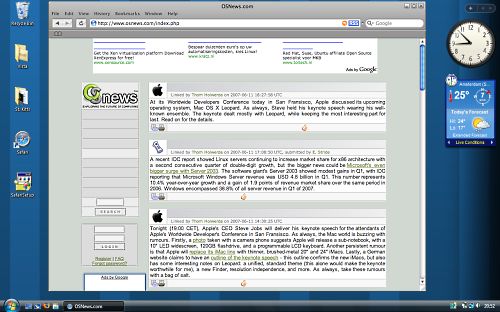 Jobs re-iterated June 29th as the release date for Apple’s iPhone. Developers will be able to write web-based applications for the iPhone using AJAX, which can sport the same look and feel as the other iPhone applications.

As always, I would like to thank MacRumors.com for providing us with their excellent live text and photo feed.