The Nivo is a new ‘ultra thin’ client device under development by British, not-for-profit organization Ndiyo. Its principle intended market is developing nations and the project is based upon a non-profit model. The aim of the project is to create hardware and software that can lower both financial and technical skill cost of computer service provision.

Other companies have experimented with the thin client approach but the Ndiyo takes things a step further in terms of miniaturisation and streamlined, single purpose design, hence the use of the term ‘ultra thin’.

At the current stage, the project consists of Linux based software and prototype hardware. In this article I’m going to explore some of the issues surrounding thin clients in order to paint a picture of where a device such as the Nivo sits.

For those of unfamiliar with what a thin client actually is, the basic idea is this:

In order to operate, a typical desktop PC requires only a source of power. It can be connected to network such as the Internet or an office network but it does not require a network of other computers in order to work. The independent operation of a single PC is made possible by the fact that it has a complete set of component parts needed to support its basic functions; these components include a logical and computation facility (the CPU), short term storage (the RAM), and long term storage (the hard disk).

The thin client takes a different approach. In a thin client, as many of the software and hardware components as possible are moved out of the client computer and onto a server. Simplifying the client machine in this way reduces its size, power consumption, cost, and maintenance requirements.

So, to shift the balance of components from desktop machine to the server is to move closer to the thin client ideal.

You’ve probably had a taste of the ‘thinning out’ of a client system if you have ever worked in a large office: Often, in such an environment, it is considered inefficient to give each computer its own printer. In such cases, a single, shared printer may be located in a common area of the office. To consider the idea of thin client adoption is to pose a question as to whether this idea can be taken a step further: How much can you remove before the computer cannot be used for typical office tasks? In most cases, removing the display and the input device probably exceeds a sensible upper limit of how far you can go along the thin client route. Computers without input methods or without a display do exist and are used but they cannot replace the functionality of a desktop PC to any meaningful degree.

Some of the computer industry heavyweights such as Sun and Oracle have experimented with the approach in the past but without great success. As a result, in most people’s mind, the thin client concept will always be associated with a series of early 90’s network based computers that never really took off.

In fact, the story of the thin client goes back far further than this. The earliest thin clients were the dumb terminals used to access early mainframe computers. Such early computers were both enormous and hugely expensive. In order to extract the greatest utility from each mainframe, dumb terminals – computers with limited processing power and no local storage – were created so that a group of people could all share the resources of a single mainframe computer.

I would argue that some of the difficulties that have frustrated previous creators of thin client solutions have been of a psychological rather than purely technical nature. The desktop PC is the dominant model and consumers need a considerable shove before they are willing to shift over to a new paradigm. It’s possible to draw a parallel between thin-client adoption and public transportation adoption. In the case of the latter, there are cases where switching to public transport is a sensible idea, but the bottom line is that it would take a lot to get some people out of their car. Boundaries, of pride of ownership, individualistic appeal of independence, and feelings of security, have to be crossed before people will give mind-share to something that opposes the entrenched model of usage.

Of course, there are developing nations that don’t have much of an established IT tradition, and in these environments, thin client evangelism might actually face less resistance. In a case in which IT provision is being introduced to an an institution for the first time, there are no desktop PCs to pry from the clutches from crying, pleading office workers.

The main advantages of a thin client solution are:

The single point of maintenance of a thin client is an advantage that is easily overlooked. Typically, in the case of an office full of standard PCs, the skills cost of each workstation might be a considerable fraction of the total cost of each workstation. In the case of a technical failure, time spent maintaining a single machine can range from a few minutes right up to an hour or more. Evaluating the monetary cost of a single workstation while ignoring the admin-time cost of a solution is an easy, and very common, mistake.

The main shortcomings of thin clients are:

The Nivo: an ultra-thin client

Those who have read my other articles will know that I am a sucker for ideas that challenge the conventions of desktop computer use, and so I was intrigued when I heard about Ndiyo, a British organization who are developing a series of thin clients. In fact, they refer to their system as ‘ultra-thin’ because they take the streamlining concept further than most previous attempts by other companies.

The Ndiyo Nivo (network in, video out) client contains no local storage capacity, minimal connectivity and minimal on board processing power. The unit itself takes the form of a sturdy looking, metal box with connector ports distributed on either end. VGA on one end and keyboard, mouse, Ethernet, and power on the other end. Internally, there are no moving parts. 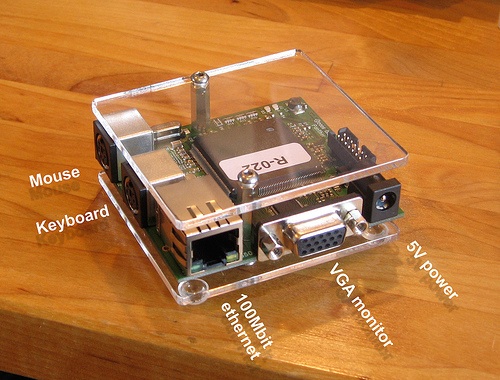 Because the Nivo is truly a thin client, it cannot be operated in isolation; a server is required. The server is a desktop PC with the Nivo software loaded. The software works under Linux or Windows. Ndiyo even provide a bootable CDROM image to make possible a zero install setup. This image is based on the latest Ubuntu.

Software-wise, each user is given access a set of default application programs that one would expect from an Ubuntu-powered desktop such as: web browsing (Firefox), office productivity (Open Office), Email and PIM (Evolution). Remember, you’re not restricted to any particular software; you can add anything that you could add to any other Linux system. Obviously there will be limitations in terms of what the system can manage to run over a network; it wouldn’t be reasonable to expect a system such as this to be able to handle a graphically intensive, high-end game, for example.

So, to recap, once the server is up and running, the setup procedure for a new Nivo workstation would be simply to connect keyboard, mouse, and monitor to the Nivo and then connect the Nivo to the Ethernet network.

Each individual Nivo is stateless in operation; that is, it contains no local storage. This means that you could, in theory, disconnect a machine while it is in use, move it into another room, reconnect to the network, and recommence work at exactly the point at which you left things: all of the applications and windows would be in exactly the state in which you left them because their state exists on the server. This feature is useful in countries with a poor energy infrastructure because it means that if the server is connected to a UPS, a temporary power cut need not be a disaster for the client users.

The provision of basic web and office application services to a network of client machines in developing nations is a logical application of the thin client concept. However, I wonder if Ndiyo are failing to exploit the potential of their device in the consumer market of first world countries? I doubt that I’m the only person who would be interested in a home version of the Nivo; as soon as I started poking around the website I started thinking of things that I could use a Nivo for around the house.

Such a home version could feature, in addition to standard layout, composite video out and sound output. USB might better be a better fit than PS/2 keyboard and mouse. Such a device would make an ideal living room or kitchen computer. There are lots of such environments where one might prefer a terminal that gives access to some standard tools in a robust, low-maintenance package instead of a full desktop or laptop PC. It would be great for light use such as looking things up on the web, a bit of IRC chat while cooking, and checking the progress of downloads, etc. Using it as a music and video jukebox is also within the realms of possibility.

Regardless of how ‘easy’ it is to, for example, setup a computer in the guest room when people are coming over to stay, it’s still seems like hassle compared the simplicity that a Nivo could offer. In addition, I could imagine that many a geek might enjoy a few points of access, dotted around his or her geek lair, and all with a single point of maintenance.

I wonder if the offices of first world nations could benefit from what the Nivo could offer? The truth is that, for 90% of ‘typical office use’, a complete PC is overkill. Most office workers use only a small number of very standard office applications. Theoretically, a ‘perfect thin client’ is just what offices need.

Having just been asked to, temporarily, add an extra Internet ready PC to the conference room, I bet many an admin has wished that he had access to something a bit like the Nivo.

Within the business world, the thin client faces many of the same adoption problems that are common to other non standard solutions, such as open source software alternatives, that are battling to break through into the mainstream. The famous IT maxim that ‘No one ever got fired for buying an IBM’ could be expanded and recast as ‘No one ever has the guts to bet the IT part of their business on something new and untried.’

Find out more at about the Nivo and other projects by visiting the Ndiyo website.

About the author:
Michael Reed is so geeky that he can use phrases such as ‘kitchen computer’ and ‘amusing assembly language anecdote’ without even a hint of irony. Read more about his geekyness on his website.