Just like Eugenia yesterday, I also upgraded my laptop’s Ubuntu Feisty installation to Gutsy a few days ago. The upgrade process went completely awry, though, so I was forced to do a fresh install. Not a bad thing, as it gave me the opportunity to take a look at Ubuntu’s soon-to-be-released Gutsy Gibbon with GNOME 2.20This new release of course comes bundled with the latest GNOME release (2.20), and hence, many of the changes are courtesy not of Ubuntu, but of the GNOME team. And even though I often criticise the GNOME team for not having a plan for the future, that does not mean I do not like GNOME the way it is. And with the recent 2.20 release, they have done a really good job at introducing more polish into the desktop environment. 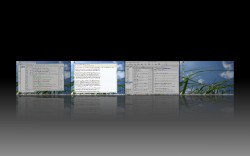 The first thing I like about the new GNOME release is the stunning new version of Clearlooks. Even though Ubuntu does not use it by default (it of course defaults to Human), it does include it in the default installation. You can find it in the brand-new and much-improved Appearances dialog, and dear god (lower-case ‘g’), does it look good. Couple the new Clearlooks with Compiz Fusion (now included by default in Ubuntu, and configurable via that same Appearances dialog), and you are looking at a desktop which easily rivals both Vista and OSX when it comes to bling. The Ubuntu guys have been very conservative with their settings, so users will not be overwhelmed by pointless effects. If you want to add more bling, or want more control, be sure to do a sudo apt-get install compiz-config-settings-manager. A recommended plugin (and now a personal must for yours truly) is the Expo plugin. This will show all sides of your desktop cube in a row, with a nice subtle reflection, allowing you to switch between them, and drag applications from one desktop to another.

One thing I still miss (or is hidden too well) in Compiz/virtual desktop is the ability to militantly confine applications and their child windows to certain desktops. I use four virtual desktops, with the first reserved for instant messaging (Pidgin, XChat), the second one for browsing and current work (Firefox, OpenOffice, Gedit). The third virtual desktop is solely reserved for a full-screen instance of Evolution, and the last virtual desktop is a dumping ground for applications that either do not need my constant attention (music players) or stuff that I may need in the future, but are not needed right now. I want to have the ability to tell Pidgin that if someone sends me an instant message, that its window should appear on the IM desktop, and not on any other desktop I might have selected (I detest tabbed user interfaces, so that trick does not work). I realise that this is not a barrier-to-entry kind of feature, but still, I am sure more of you would like something like this. Sure, Devil’s Pie can do all this, but you can hardly call that fantastic little application easy to set up.

Eugenia already suggested it (in fact, we discussed it before she wrote the article) but I would really like to see Ubuntu default to the Bitstream Vera fonts, with sub-pixel hinting set to medium. This presents the crispest fonts one could ask for. In fact, up until not too long ago, I needed to do a lot of manual fixage and editage to get Linux fonts to look this good – now it is just a few clicks away.

GNOME 2.20 also finally fixes a very, very, old bug: the buttons in the taskbar applet would change size at will, dependent on how many windows you had open, the names of the windows, the position of Jupiter compared to Venus, and so on. This bug has now finally been fixed, and the buttons will not resize at will anymore. 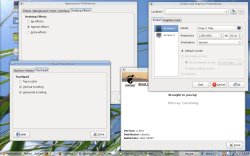 Ubuntu (or GNOME) still needs to dive into the process of consolidating the amount of preferences panels. Both /administration as well as /preferences are literally overflowing with entries, and I would really love to have some of them combined. For instance, there are three panels strictly related to networking, and things like Keyboard, Keyboard Shortcuts, and Mouse can be combined into one panel called ‘Keyboard & Mice’ (coincidentally, that is how OS X does it). Speaking of the Mouse panel, many, many, many thanks to the Ubuntu guys for creating a Touchpad tab in the mouse panel. This was one of my biggest pet hates about using Linux (I hate touchpad tapping, it drives me absolutely nuts), and seeing it fixed so late in the development process (it only got added in the past few weeks) was a really positive and welcome surprise. The changes you make in this tab are instant, so you do not need to restart X – something you were forced to do before, since the only way I knew of to disable tapping was to add MaxTapMove=0 to your xorg.conf.

In addition, there is now an X configuration applet in Ubuntu. If there is one thing many people have been begging for ever since Ubuntu began its march to the top, it is this one. Apart from configuring drivers for your video card and monitor, you can also manage dual-screen properties from this panel.

Evolution has gotten some serious love too. Not only does it look a whole lot more appealing (I am not really sure what they have done to the interface, but it looks a lot cleaner), it also received some cool new features. My absolute favourite must be that Evolution ‘knows’ when you are supposed to include an attachment (by looking at keywords) and then warns you before sending if you forget to attach it. My friends will thank the Evolution guys.

The progress Evolution has made still does not negate the fact that I believe Evolution is overkill for many users. In addition, a spam email message brought Evolution down to a grinding halt, and it took me quite some time to get Evolution to work properly after that, since Evolution insisted on re-opening with that same email selected. Some protection system against this sort of thing (which never happens on Mail.app, BeAM, or Windows Mail) would be very welcome – this is not the first time this has happened in Evolution.

The new Ubuntu also comes with Pidgin 2.2.0. Pidgin has come such a long way since its Gaim days, it is not even funny. The client is finally growing up real fast, but there are still some things that I miss – most importantly, Pidgin’s MSN support is not always what it should be. The biggest annoyance is that you cannot seem to change your server-side MSN alias, so whatever you enter client-side, it will not update the server side, and therefore not show up in your contacts’ user lists. MSN has a 100% market share in my country (I kid you not), so this is actually a big deal for me.

There are some things that I miss in Ubuntu/GNOME. Even though it obviously comes with The GIMP, I really also want a simple MS Paint like paint program to come pre-installed. For this review, for instance, I am taking various screenshots, and it would have been much nicer to just have a simple paint program at my disposal to quickly edit these shots, without having to resort to The GIMP. You know, you do not hammer in a 1.2mm by 3cm nail with a sledgehammer.

Another personal pet peeve is the complete inability to edit toolbars. I have an almost unhealthy urge to remove any toolbar button I do not use, just to make my interface cleaner. I do not need copy/cut/paste/find/print/etc. buttons in every window’s toolbar, simply because I use keyboard shortcuts (or the menubar) for these actions. It would be nice to be able to right click on any toolbar and remove buttons that way (similar to Firefox). However, seeing it took me two years of whining to add a Metacity option in gconf to minimise-windows-upon-doubleclick, I imagine something like this may take closer to 20 years to add to GNOME. Toolbars are overrated anyway.

Overall, however, I am simply extremely impressed by the new GNOME and the upcoming Ubuntu release. You can see the developers have put a lot of effort into not just cramming in new features, but also making sure that existing features work and look better. This is the first time that I truly feel as if I am using a product when using Ubuntu, instead of a collective effort to make desktop Linux suck less. The gaps that need to be filled are getting smaller each release, and this particular release closed some important gaps already.

If there ever is going to be a ‘year of the desktop’ for Linux, the 2007/2008 season definitely is a strong contender.