Geeks.com sent us in the JVC GR-D347US camcorder for a review. Read on for more and check some test footage for this cheap digital camcorder, possibly the cheapest miniDV model in the market today.The JVC GR-D347US was originally manufactured for Wal-Mart, but some other retailers got their hands on it too. Geeks is selling the unit for just $150 (special today) and this is makes it one of the most affordable miniDV cameras on the market today. In the box we found the battery pack, a US AC power adapter, a shoulder strap, a composite A/V cable and a user’s manual. 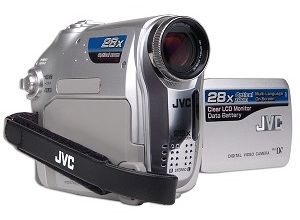 The NTSC JVC GR-D347US has an optical zoom of 28x, a sensor of 1/6″, auto and manual focus, electronic stabilization, zoom adjustment, a TFT 2.5-inch color rotate-able screen, a retractable viewfinder, built-in microphone & speaker. The camcorder also has a mini firewire port, an infrared receiver (remote control sold separately), a tripod hole, and photo snapshot capabilities (recorded on the tape itself). The 27mm zoom lens has an aperture of F/2.0, minimum focal length of 2.3 mm and a max one at 64.4 mm. The device fits extremely well on the hand as it is one of the smallest camcorders on the market! The user is able to easily touch the zoom and basic controls with one hand, but for additional controls the second hand must be used too as they are located next to the screen.

The 2.5″ 4:3 screen is bright and easily accessible. On the same side that the screen resides you will find the 16:9 button that switches between 4:3 and 16:9 capture, the menu button that turns ON the main camera menu (only accessible during manual mode), and a joystick that allows you to move around and “set” your preferences. The main menu is visually designed pretty poorly, it just feels like quickly-put-together software — although no software bugs were encountered. You can select effects, transitions, shutter speed, set manual exposure, set the white balance, and switch to macro mode. Through that same mode you can select LP or SP tape recording mode, custom gain settings and audio clean up from the wind. 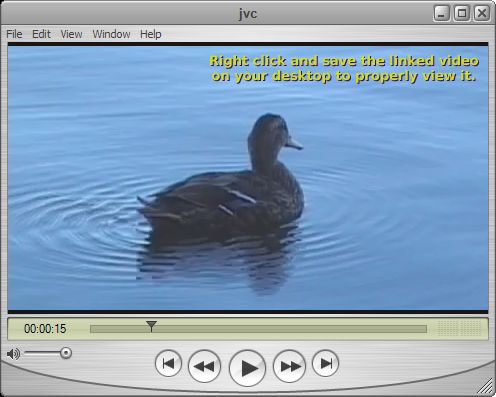 Overall, we found the ergonomics of the camera to work well for a consumer camera. Setting up the exposure and white balance was easy too. The only usability problem we had was with the zoom control. It’s just impossible to precisely control it without zooming too fast or too slow. Battery life is below par too, at around 90 minutes (most cameras would do 120 mins). JVC sells higher capacity batteries for this model.

Regarding picture quality it is as good as Canon’s current low-end camcorder, the ZR800. It will produce some good SD quality videos for your PC and DVD player (and more than good enough for YouTube). However, compared to the 2004 low-end Canon model, the ZR80, quality is much better with the JVC. The colors are more punchy (one could say that the blue colors are over-saturated), the camera has less noise in the dark, and most importantly, it has almost 25% wider angle allowing the camera to see “more” of its surroundings! Audio quality is pretty good too, although when we hand-held it we could hear some motor noise in the footage. Motor noise that was not audible when the camera was set on the tripod instead.

We tested the camcorder with Windows (Sony Vegas), Linux (Kino) and a Mac (iMovie ’05) and the footage was captured and editing worked perfectly with each one of these OSes. The camera captures at 720×480 (both for 4:3 and 16:9-anamorphic) and when played back in 16:9 the anamorphic resolution used is 873×480.

Overall, we thought that the JVC GR-D347US is as good, if not better, than other low-end camcorders priced at around $250. Currently selling at just $150 at Geeks.com, it is a smart purchase for those who don’t currently own a camcorder. If you do own a miniDV camcorder already and you are thinking of upgrading, wait 2-3 more years and buy an AVCHD camcorder when the time is right.