Last week, Stardock released version 6 of WindowBlinds, their Windows skinning suite, which is the first version to include full support for Windows Vista. Stardock was kind enough to provide OSNews with a copy of WindowBlinds 6.0. Read on for some findings.Stardock, the company behind Windowblinds, actually has a fairly long history. The company made name for itself as a major os/2 ISV with their Object Desktop suite, a set of applications that extended os/2’s graphical user interface. However, as we all know, os/2 sizzled out, and Stardock was forced to port its Object Desktop suite to Windows in 1997/1998. Stardock continued to sell the version of Object Desktop for os/2 until February 2001, when they discontinued OD for os/2.

WindowBlinds itself is also quite an old application. The first version was released in 1998 for Windows 95, and was developed by Stardock and Neil Banfield. The second release added various new features like sub-skins, scripting, user-controlled colours, and so on. Version 3 included support for Windows XP and was released alongside Windows XP itself. The fourth version provided numerous bug and performance fixes; coincidentally, WindowBlinds 4.6 is the last version that supports pre-XP versions of Windows (now named WindowBlinds Classic). WindowBlinds 5, released November 2005, added per-pixel alpha blending for the entire window border.

WindowBlinds 6.0 adds, among other things, the following features: 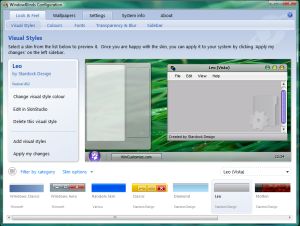 The new configuration program has a ribbon-like tabbed interface thing, and I must say, it is very easy to use, and looks rather dashing too. It is a definite step up from previous versions, where logic was sometimes a bit hard to find in the user interface of the configuration program. Additionally, you can change the colour of the interface of the program (surprising, is it not?). When you switch a skin, or change some specific elements of a skin, the apply button will now blur and decolourise your desktop during the time it needs to adjust the desktop to apply your changes. Nice touch.

By default, WindowBlinds 6.0 ships a few themes. These are obviously themes designed for use with the new version, but some of them still contain some errors. The ‘Leo’ theme for instance does some weirdness where the window’s toolbars appear to be a few pixels wider than the actual content of the window – those are little mistakes I do not wish to see in themes shipped by default. Some themes also show off the freeform skinning of the task-bar.

Via the configuration program you can also manipulate the themes themselves, by playing with colours, fonts, transparency, and blur settings. Sadly, you cannot edit Windows’ default Aero theme – I had hoped I could colourise Vista’s taskbar to match the window frame colour (one of my pet peeves about Vista, the taskbar always remains black, no matter the frame colour), but sadly, this is impossible. You can also create and manage themes for Vista’s sidebar, or use the Sidebar theme defined by the actual WindowBlinds skin. 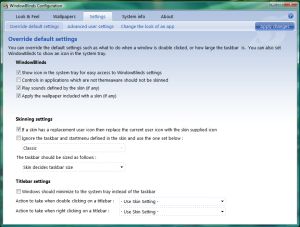 A skinning application is obviously only as good as the themes available for it. And sadly, this is where WindowBlinds fails – in my opinion. There are ten million billion themes out there, but 99% of them are – excusez-moi – utter rubbish. When I set out to find a theme for my desktop, I want that theme to be subdued, elegant, and consistent. I do not want fire breathing dragons, flames, or snowflakes falling inside my titlebars. Microsoft and Apple know this, and that is why, despite their perceived flashiness, both Vista and OSX are actually quite conservative by design when it comes to the ‘G’ in GUI.

For instance, for a while I used a specific theme on OSX that combined the modern Aqua interface with the oh-so-attractive looks of Mac OS 9: a theme named Rhapsodized, by Max Rudberg. Elegant themes like this are hard to find for WindowBlinds, and that simply is a real miss. This problem is made harder for a Vista user like me, since not a lot of themes have been adapted yet for use with Vista. Obviously, however, I know that the quality of a theme is a subjective matter – so it might as well be true that for you, there are enough WindowBlinds themes that tickle your fancy.

So, the likeliness of you wanting to have WindowBlinds is dependent on whether or not you can find a theme that you really like. WindowBlinds itself, however, is a great application, that does what advertised in an easy and very usable way. The interface is well thought out, changes are easily made, and, not at all unimportant, you can easily switch back to Windows’ default, and turn WindowBlinds off completely.

To summarise: a great, mature application, but, in my opinion, hindered by a lack of elegant themes.