The first version of Mandrake was a Red Hat derivative – Red Hat 5.1, to be specific. It used KDE 1.0 (KDE 1.0 looked like this), and was released in 1998. It soon gathered a name for itself as a very user friendly distribution, which was in part due to the advent of the drakxtools, a set of tools to configure the various pieces of hardware in a computer.

Mandrake Linux 8.1 (Vitamin) was my first experience with Linux, six years ago in 2001 (KDE looked like this by then). I had just bought a new computer, and was one of the earlier adopters of Windows XP. Interested in a bit of adventure, I decided to buy a magazine with a Linux disk attached. It was mostly an act on impulse, but I am quite happy I acted on impulse back then. I had a great time with Mandrake 8.1 – although I do recall a few problems during installation. Strangely, I distinctively recall playing LBreakout for hours on end (with Nelly Furtado’s “Whoa! Nelly” in my CD player, by the way, from back when she was still making good music). 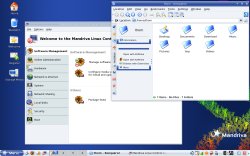 I’ve been using Linux ever since. Not Mandrake – Debian and Ubuntu, mostly, with the odd installation of SUSE here and there. Mandrake kind of seemed to lose its focus during the 9.x days, and I simply did not like it anymore. During the 10.x days, things were not getting much better, and by that time (late 2004) Ubuntu started its rise to the top. I adopted Ubuntu (or Kubuntu, depending on my DE mood), and have been using it as ‘my’ Linux distribution ever since – and overall, I am still quite happy with it.

That does not mean I do not try a different distribution every now and then, of course. So, when Mandriva offered me a review copy of their PowerPack, I went for it. I installed Mandriva on my Dell Inspiron 6000 laptop, which has the following specifications:

I opted for the KDE installation, as I consider KDE to be Mandriva’s ‘native’ desktop environment, and therefore, find it the best way to judge Mandriva.

I do not like dwelling on installation procedures for too long, but there are a few remarks I would like to make. Mandriva’s installation program has always been its strength, and in this release, it is no different. The Mandriva guys have struck the perfect balance between configurability and ease-of-use, meaning both power users as well as novices will find their way through Mandriva’s installation procedure. The installer also noted me I could use the closed-source Ati driver (no way, the open source one is much better for my card), and it let me choose between the ‘native’ bcm43xx driver or ndiswrapper (more on that later). 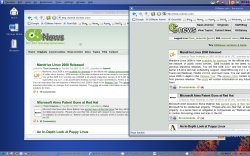 Mandriva 2008.0 comes with interesting artwork too. The new background image, used in the GRUB menu, kdm, and the actual desktop, has a helix-shaped group of stick figures – these stick figures also make up KDE’s boot splash. It all fits together, and adds a nice touch. I wish I could be as positive about the default theme too, but I really cannot. I do not like Mandriva’s theme (Ia Ora) at all. This is of course an extremely personal issue, and not a big one at that; themes are easily changed (Plastik, in my case). And let’s face it, is there anyone who really likes the brownish orange-y stuff Ubuntu uses?

Mandriva installs the latest version of KDE, 3.5.7, with a whole boatload of applications to boot. For browsing, Mandriva opted to default to Firefox. When in a KDE environment, I prefer Konqueror not only because it integrates better graphically, but also because Konqueror loads itself much faster than Firefox does. On top of that, in KDE I use a Mac OS X-like menubar atop the screen, and Firefox does not respect that decision.

Since this is the PowerPack edition of Mandriva, it also comes with a lot of non-free applications installed by default, including something like LinDVD, a commercial DVD player for Linux. Sadly, it appears to be written in Gtk+ 1.x, and looks like total ass. Java is installed by default, just like RealPlayer, Skype, Flash, and so on.

For the rest, Mandriva comes with all the usual suspects you come to expect from a KDE-based distribution, but still, a few peculiar decisions have been made – decisions which show the dual nature of Mandriva (ship both GNOME and KDE). For instance, instead of the perfectly capable Krita, Mandriva ships The GIMP for the heavier image editing work. Here we obviously enter a discussion which has reared its ugly head on OSNews more than once before: should you mingle Gtk+ and Qt applications on a Linux system? My personal answer is “no”, for a number of reasons.

Firstly, the aforementioned menubar issue. KDE is really, really cool in that it allows for a Mac OS X-like menubar – something GNOME can only do with an unoffical patch to Gtk+. In other words, if you switch to a Gtk+ application in KDE, the menubar will move back to the Gtk+ window, instead of being atop the screen where it belongs (if you enabled that option, of course). This is major consistency issue for me, and I really wish the GNOME/Gtk+ guys will finally get around to fixing this issue, so that the KDE developers can then devise a way of adapting Gtk+ applications running in KDE accordingly. 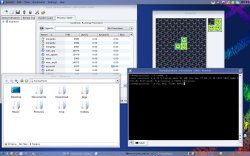 Secondly, there is the graphical consistency issue, something made worse in Mandriva, because when you change themes in Mandriva (like I did, to Plastik) the Gtk+ theme does not switch along (Gtk+ apps still sport the Ia Ora look) – something it is supposed to do. The Gtk+ settings panel in the KDE Control Center (the GTK-Qt theme engine) does not appear to be present in Mandriva – it is not installed by default, for whatever reason. After installing it, everything worked fine. This is really something that ought to be installed by default in a distribution that aims to include both Qt as well as Gtk+ applications.

The graphical inconsistency issue also extends towards the layout of menus and buttons. GNOME and KDE applications have their own layouts, and mixing those is confusing. All in all, I wish that Mandriva would just install Qt applications only when I order it to do a KDE Desktop installation. This would become problematic, since the drakxtools are written in Gtk+.

Speaking of the drakxtools, or Mandriva Control Center, it are still a fine collection of system management tools. Ok, so they are written in Gtk+, but let us forget that for a while. There is another, more pressing problem with these tools: they are mostly ‘wizard’ based. They guide you step-by-step through configuration screens, only allowing you to edit one type of setting at a time. This is really, really annoying: give me a proper configuration dialog for crying out loud, where I can edit whatever I setting I want. Being more dialog-centered also forces you to keep the amount of options to a minimum. Something for the future, maybe.

On to a proper, annoying bug. As you could see in my rundown of specifications of my laptop, it uses a bcm4318 wireless chip. The 43xx chips in general are a pain in the behind in Linux, but to make matters worse, the 4318 may be the worst of all. Where many of the bcm43xx chips work just fine with the native Linux driver, my 4318 simply does not. It works sometimes for hours on end, and then it will not work for another few hours, dropping connections, being really slow, or simply not connecting at all. This is not a Mandriva issue; it happens in Ubuntu too. Hence, in Ubuntu, I use ndiswrapper, which does work fine.

Sadly, not so in Mandriva 2008.0. The network drakxtool refuses to properly configure ndiswrapper. It will install the driver, but when that is done, and it tries to load ndiswrapper with that driver, it simply refuses to, with a really annoying error message (shown below).

I could not get it fixed. I tried it the die hard way, via the CLI, but no good. And yes, I have thought of the obvious things like blacklisting the native driver (heck, I even removed it), but all to no avail. Quite annoying, as I do not have wireless now under Mandriva.

There are a lot of what I call ‘polish bugs’ (note how ‘polish’ is one of the few words in English that change its meaning by merely capitalising the first letter). Mandriva comes with either Compiz or Metisse, and this is easily set up using the Mandrake Control Center. I opted for Compiz Fusion (Metisse is a bit too… Weird for my tastes), and it works just fine. It is just that I use the Expo plugin a lot, which I want to enable via the top left screencorner – but that is a no go. Even though the option is correctly set, the hotcorner does not work. Very annoying. Another minor bug is that the Kerry search tool does not respect the shortcut key combination it uses (alt+space). A minor bug, but annoying still.

There are more of these types of bugs. That KDE bootsplash I talked about earlier, sometimes turns black when loading KDE. My laptop’s volume/play/etc keys do not work (they work fine in Ubuntu). X does not seem to respect the set mouse cursor theme very well. And so on.

All those small bugs contribute to my overall impression of Mandriva 2008.0: a good, solid distribution, with an excellent installation routine, decent configuration tools, but with quite a few polish issues that they need to work on. The underpinnings are definitely there, and if you are not a total consistency idiot like me, Mandriva is simply a solid distribution, which offers the best of both GNOME and KDE, and comes packed with a whole boatload of software. In addition, even though I do not particularly like it, it is one of the few (only?) major distributions that facilitates the installation and use of Metisse, the other 3D desktop (that is not a 3D desktop).