PureMobile sent us in the most talked about recent HTC smartphone for a review, the TyTN-II (codename “Kaiser”). We give it a whirl and of course, we can’t help out ourselves by comparing it to the iPhone but also to the QTek 9100.The Kaiser is a tri-band HSDPA and quad-band GSM phone. This means that it will work almost everywhere in the world in either 3G, EDGE or plain GSM mode. It features a 2.8″ QVGA screen, 128 MB RAM, 256 MB ROM, a 400 Mhz ARM CPU, Wi-Fi 802.11b/g, Bluetooth 2.0, GPS, USB 2.0, microSD slot, 3.2 MP camera with autofocus and video-call camera. In its box we found a very nice case, CDs and guides, a 1350 mAh battery, a charger, a second stylus and USB-based heaphones. 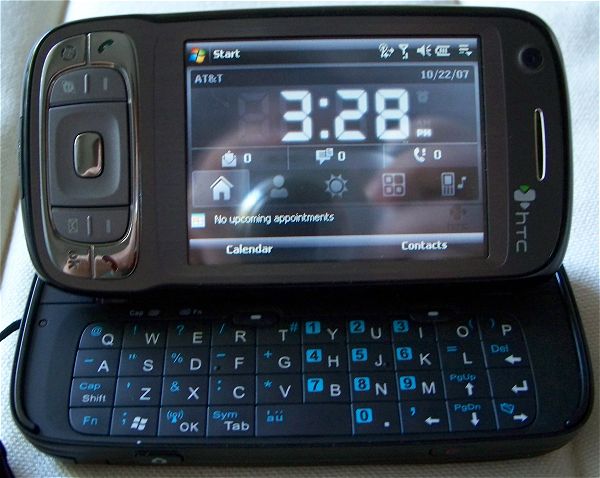 The Kaiser feels amazing in the hand. It has a good construction and a good size. It’s a tiny bit longer than our previous QTek 9100 and heavier, but it is a bit thinner. It feels much bulkier than the iPhone, but on the other hand, you would appreciate its hardware keyboard that exposes itself after you slide the upper part of the device. The nice added capability of the Kaiser is that when you continue sliding it, the screen actually tilts, which makes it ideal for video-watching. The device has easy to reach button controls on the front with hand up, call, start menu, “ok” button, IE, Outlook and two softkeys buttons. On the sides you will find the voice dialing, camera, on/off buttons and a scroll wheel. The keyboard is easy to master, although I find the QTek’s 9100 keyboard easier to type because the keys are more spread out comparatively.

The device loads in about 30 seconds time. It’s got over 100 MBs of free RAM after fully loaded. The 400 Mhz CPU is very much visibly so faster than the 200 Mhz that my older QTek has. However, dialing and application loading is definitely not as spiffy as it is on the iPhone. I found the reception to be very so-so, about 1 bar where other phones have 2 or 3 bars. However, battery life proved to be adequate with over 4 hours of talk time, with 3G ON (which consumes more battery). Unfortunately, the video call did not work, even if we used an AT&T account, so this feature went untested. Voice quality was much better than on my QTek 9100 as the speaker seems to be of superior quality. 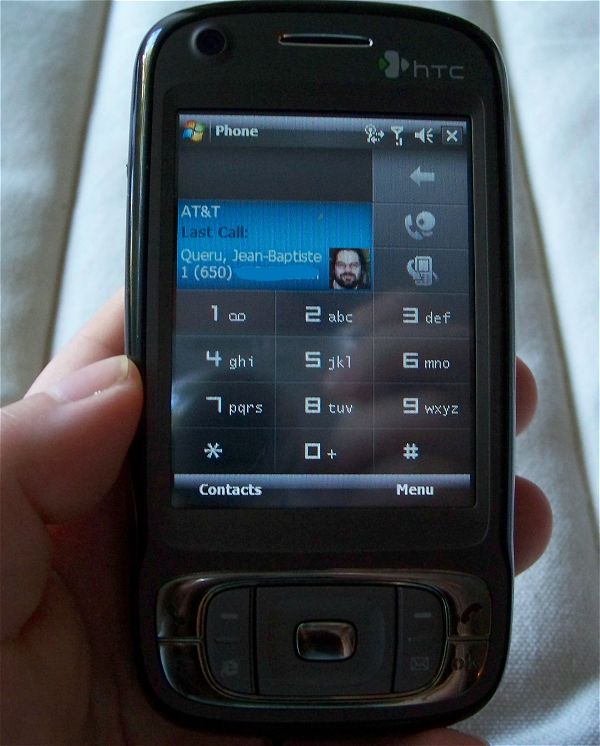 The GPS module is a bit flaky at first. The native version of Google Maps wouldn’t find any satellite because it wouldn’t hook up to Windows’ GPS libraries for some reason. We had to use a little trick. Run this application first to “wake up” the GPS, and then Google Maps worked perfectly. I was very surprised that this GPS module found my location within 2 meters from where I was standing, and the external SIRF-III Bluetooth module is precise within 10 meters only. So, props to HTC for including precise GPS hardware.

The autofocus camera takes “ok” pictures too, but it comes without a flash light. HTC forces the camera app to be in “night mode” automatically when it detects low light (there is no option to turn that on/off). The software for the camera allows for a number of preferences, which will please users who want more control. The phone also records 3GP and MP4 QVGA and QCIF videos that can later playback via Windows Media Player 10 Mobile. Unfortunately, the resulted mp4 videos are not compatible with Quicktime (other phones’ mp4 files are), but they are compatible with VLC.

The Bluetooth stack includes A2DP/AVRCP support among others, although the same bad usability as in older WinMob OSes exists: you can’t send multiple files via Bluetooth, and each time you send a file, you have to search for devices nearby instead of selecting off your current paired list. This just takes forever and it’s slow. I had to install Total Commander to do the job fast. 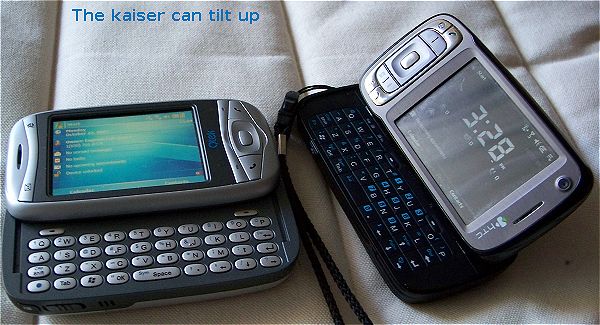 Regarding the rest of the software: There is Java MIDP-2 support where GMail and Opera Mini ran fine, voice memos, internet video streaming (for use with mobile youtube), Pocket Office, MSN IM and email, and the redesigned call screen as found on Windows Mobile 6. I like the Call screen of Windows Mobile, but it’s just not as spiffy as iPhone’s. More over, I was able to somewhat crash the phone when trying to call while in landscape mode! One more thing that bothered me was the fact that HTC shipped the Kaiser without VoIP SIP support. In fact, I don’t think that there is any WinMob6 phone that shipped with VoIP, even if that was a feature of the new version of the OS.

Finally, there are three additional software features that HTC added to the mix: one is a utility that allows you to close applications with a click instead of simply “minimize” them, and the second one allows you to use your finger to scroll up and down, just like with the iPhone. The third application is a “Today plugin”, and it takes up half the screen. It has tabs and allows you to see the time, missed phone calls, number of emails/messages, “quick dial” with pictures, weather, application launcher, and ringing styles. This Today plugin is really nice and useful, but it takes 2 full seconds to switch orientation, and this is a problem for me who likes things to be spiffy — at least on phones.

Overall, this is a great smartphone. Possibly the best Windows Mobile phone in the market today for the price. It is not as sweet as an iPhone, but it is a phone that can definitely “do more” as there are over 20,000 applications for that platform. And that’s a big plus.

Cons:
* No flash light
* No FM radio
* Keyboard not easy to type
* USB port for headphones is non-standard