Neuros Technology did it again: one more of their interesting media products hits the market, and this time it uses Linux. We used the Neuros OSD this past week and here’s what we think about it.At its heart, the Neuros OSD is a TV recorder. It has a small form factor, and it’s by far the sexiest product Neuros released so far. It comes with a stand, an RCA cable, a remote control, an IR Blaster, and a power cable. Connecting it to various devices is an easy task. You can choose between S-Video in or RCA in, and RCA out. Unfortunately, there is no S-Video out. The company said that “our team noticed a very minimal gain in quality of the video output when using S-video instead of Composite during their tests“, although this is hard to believe when you playback full NTSC .avi files rather than recorded QVGA ones. More over, on the device you will find an ethernet port for LAN support, and a serial/VGA port for debugging and development. 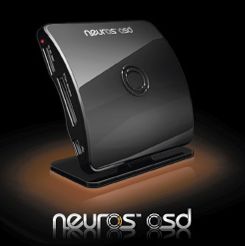 The Neuros OSD has CF, SD, MS and USB ports on the front. This way, you can connect a USB key or drive, or a flash card to record. It can record in QVGA and VGA resolutions using different mpeg-4 formats (or more precisely, “parts”), depending on the targeted playback device (e.g. for the PSP, iPod, TV, phones etc). The interesting addition of the Neuros OSD is the IR Blaster which when placed against the IR receiver of cable boxes it can change the channel! So for example, if you schedule the OSD to record “Prison Break” on FOX at 8 PM on Monday, and then record “Heroes” on NBC at 9 PM, the IR Blaster will change the channel on the cable box and so both shows will be recorded. More over, there is a one-click recording option, so you will never miss a thing. We recorded a few shows from our cable box to test the device and also from our DVD player and it Neuros did the job as advertised.

An additional usage of the Neuros OSD is its playback abilities. It can playback everything from Quicktime to FLV, ASF, WMV, mpeg, mpeg4, but we had no luck wtih h.264. The best compatibility was for DivX files that it played back at higher resolutions without sweating much. Additionally, it can playback mp3, wma, ogg vorbis, flac, wav, AAC, and G.726. It is also able to decode bmp, jpeg and gif and function as a picture viewer. The part we really loved was its UPnP support. We used the TwonkyMedia UPnP server to test the Neuros, and stream videos over our local network.

Perhaps the most interesting new feature is YouTube video streaming and also generic audio streaming from the net. Originally, the feature didn’t work great for us, but the guys over at Neuros fixed the network problem and we can now stream videos that are longer than a minute. Still, we do have a few problems, e.g. some videos start showing on TV after a full minute or so (with these videos already on their first minute)! The big plus of running on Linux of course is that you can easily release an SDK and allow for third party applications!

The UI is not too bad, but it could be better. Some bugs exist and in a few cases we had to remove the power cable to reset the device. Also, I am somehow not able to put the device in standby using the “PWR” button on the remote control. Thankfully, new firmware versions are regularly released. I think that a picture is worth 1000 words, but possibly a video can worth 100,000. So, here’s our video showing off the user interface and various options available.

Some more Neuros OSD youtube videos can be found here, although most of them are running firmware versions that sport older UIs.

Overall, Neuros seems to get it. Extensibility, plus a powerful product. Hopefully HD abilities and failing that, S-Video out, will be available on the next major revision of the product. Sure, it doesn’t feel as cool as an AppleTV, but it does so much more!