Just as video killed the radiostar, multitasking killed the desk accessory – or so it seemed. With the advent of Windows 1.0 in 1985, and System 6 in 1988 (MultiFinder included by default), cooperative multitasking became standard on these systems, effectively eliminating the need for things like TSRs and special driver classes. Slowly but surely, their importance diminished, and it seemed like the end of the desk accessory.

That is, until Microsoft came up with something called Active Desktop, part of Internet Explorer 4.0 in 1997. Active Desktop allowed Windows users to place snippets of HTML code on the desktop or in separate windows, which would update their content regularly, allowing for things like stock tickers and weather forecasts. 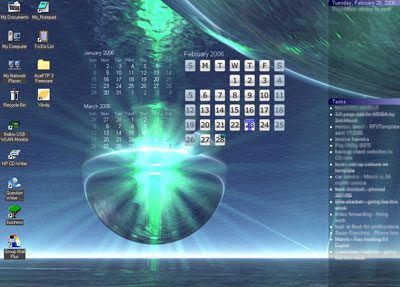 Despite Active Desktop not being an outstanding success, it remained an optional part of Windows until Vista, where it got replaced by Windows Sidebar and Gadgets (more on that later). In 2000, Windows gained another means of having desk accessories: DesktopX, by Stardock.

On the other side of the fence, the Mac OS retained its capability to run Desk Accessories until the switch to OS X, where support for them was finally axed. But, as we all know, not for very long.

With the advent of Mac OS X 10.4 Tiger, released in April 2005, Apple dusted off the concept of desk accessories, took a long, long, very long, and hard look at Konfabulator, and implemented a very similar technology to the latter called Dashboard. Both Dashboard and Konfabulator combine the traditional desk accessory with the Active Desktop approach of using web languages (HTML, CSS, JavaScript) to display tiny little programs on a ‘layer’ on the screen.

Windows Vista carries a very similar technology, called Windows Sidebar and Gadgets. The sidebar is the default location for these modern-day desk accessories, called Gadgets in Vista (interestingly, in preview version of Tiger, Dashboard widgets were also called Gadgets). Where the default location for desk accessories in Mac OS X is an invisible layer, Vista places them in the sidebar (but you can place them anywhere else on the desktop too).

Despite minor differences, desk accessory engines like Sidebar, Dashboard, and Konfabulator are essentially the same. Despite many accusations of one copying the other, these accusations are fairly irrelevant. It is simply another case of similar people (programmers) coming up with similar solutions (web-language based mini applications) to similar problems (quick and easy access to information) in a similar timespan (2000-2007) – just like the original advent of desk accessories. To illustrate this, take into account that the first appearance of the Windows Sidebar was made in a September 2002 build of Windows Longhorn.

Desktop accessories have a long history, rooted in finding solutions to problems all operating systems faced sooner or later: how do I allow people to use multiple applications at the same time? How do I make it easy for people to quickly find bits of information, without interrupting their workflow too much? Different approaches have been tried; some have failed (did any user or programmer ever really use Replicants?), some have lingered, some have succeeded. Their usefulness is not without question, but luckily, they can easily be turned off.

Now, on to the question of importance: how important are desk accessories in the field of usability and (graphical) user interface design? Back in the day of the single-tasking machines, their importance was close to vital; they were making it significantly easier to use a computer on a day-to-day basis. With the advent of multitasking, however, their importance dwindled, and for this specific problem, they are simply not the right solution any more.

The same cannot be easily said about the present-day use of desk accessories. Today, they solve a completely different problem: how to allow users to easily and quickly access various bits of information, that would otherwise require traditional applications or web pages. Since I do not believe this problem is as encompassing as the single-tasking issues, I would consider present-day desktop accessories to be far less important than the traditional ones.