The major competitor of unlocked iPhones in Asia and Europe is the LG Prada and Viewty phones. TimTechs.com sent us in a LG KU990 Viewty unit for a review and we give it a whirl.

The device is a triband GSM phone with EDGE support and HSDPA (non-US bands). It features a 3″ 240×400 256k color TFT touchscreen, FM radio, microSD, Bluetooth, a VGA videocall camera, and a 5 MP main camera. It comes with a single proprietary port that serves as headphones, usb connectivity and charging. In the box we found the phone and its 1000 mAh battery, a charger, a USB data cable, a headset, a stylus and a second screen protector (the first one comes pre-installed on top of the screen).

The device feels a lot like the iPhone in the hand, as was designed with the main principles in mind: large touchscreen, few buttons. Still, you can find the camera button on the side, a lock/unlock button, a slider button to choose if the video, camera or view-media application is to load when you click the camera button, the connectivity/charging port, the hangup/on/off button, answer/call-logs and “backspace” buttons on the front of the device. The stylus is pretty interesting, because it’s not part of the device, hiding in it, but it’s attaching to the wrist-wrap hole and its design looks a lot like an… eyeliner. While men would like to use the Viewty, I highly doubt they will decide to use that stylus in front of others. 😉 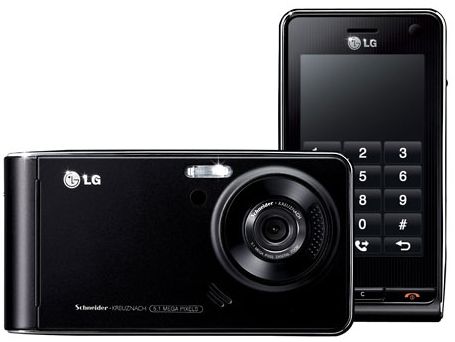 The device takes about 20 seconds to load. I found its reception exceptional, and its battery life on par to most touchscreen phones out there. 5 hours of talk time and over 400 hours of standby is not a bad performance. Speed-wise the UI is not too bad, although it’s not as fluid as the iPhone. I’d say that it’s on par with Motorola’s EZX Linux touchscreen phones in performance.

Speaking about the UI, it has its good points and its bad points. The good points is that a big part of it is designed to be used with just fingers than a stylus, it is pleasant to the eyes (comes with 4 themes too), and easy to use. In fact, I could say that the UI is very similar to the normal LG phones, just bigger and with a touchscreen flavor in it. On the phone you will find a calendar, contacts, ToDo, alarms, calculator, world clock, converter, a browser (based on Obigo), memo, organizer, messaging and emailing, voice recording, a basic video editor, FM radio app, music app, video and picture viewing app, file manager, Flash 2.0, J2ME games (with touch buttons to emulate real buttons so Java apps are more compatible with this environment), and more (check the YouTube video below by cnet.co.uk). The Viewty has a special relationship with Google, as it comes with various Google apps pre-installed, it lets you upload youtube videos and watch them too (youtube’s mobile version that is).

Bluetooth worked perfectly, and A2DP was supported. However, it was slow, we never had a file exchange with over 45 kb/sec. Additionally, the phone claims DivX, H.264, H.263 and MPEG4 video support, but none of our h.264 QVGA videos worked on the phone (it would load them and play the audio, but we would have a lot of black artifacts on the screen). DivX worked much better, as this is the main format the phone supports (the camera records in that format too).

The other problem we encountered was the fact that scrolling a list was an execise in patience. You have to quickly click an item in the list and the move your finger up and down in order to scroll through the rest of the list, but this didn’t work all the time because sometimes the phone would just select that item instead of using it to scroll. No, “flicking” the screen as you can do with the iPod/iPhone to go through pages of lists, does not work — and this is major usability problem. Using the stylus was even worse, as trying to move by clicking on the scrollbar didn’t work. Another way to scroll is to use the special button on the *back* of the phone (used as “zoom control” when inside the camera application) by pressing it left and right, but this is extremely cumbersome — although more precise.

Another problem was the design of their qwerty keyboard: if you click a button that looks like backspace it cancels your text entry, it doesn’t just delete characters. In order to delete a character you have to move your hand outside of the touchscreen keyboard and click the “C” hardware button. This is bad design and it shows a disconnect between the hardware LG engineers and their software guys. And don’t get me started on the fact that the “lock keys” button is very easily pressable in your purse or pockets. The camera button too. The phone also has a “copy text” functionality, but there is no “paste” functionality… There is also T9 support, which is the default text entry method, while in the qwerty fullscreen keyboard there are three modes: english alphabet, numbers and special chars, and northern european characters. That third screen has space for more characters, but LG decided to leave that space empty instead of adding some Greek support too (the Viewty vesion we tried comes from Asia btw). Overall, I found the qwerty keyboard less precise than the iPhone’s, but the LG can be setup to have tactile feedback when pressing a key, so this can be a plus.

It is obvious that the main feature of this phone is its 5MP camera. It is a good camera, one of the best cameras you can get on a cellphone, there is no question about that. But they put there a Xenon flash too, and a good Schneider lens, but they include no camera cap. I had only used the phone for 30 minutes before I noticed that the lens was already greasy (no, I was not eating chips). On the upside, the camera supports autofocus, white balance, color effects, ISO settings, manual focus and more. Using the scrolling button on the back of the camera was very clunky though to get it to zoom in/out, because in most cases I could see my fingers in the frame! I really don’t know who had the idea to put a scrolling button there…

The video side was good though, recording in DivX at about 3 mbps in 30fps VGA, widescreen VGA or QVGA. One special feature is that you can enable the “120fps” mode in which the camera will play it back in very clean and nice slow motion (a much better slow motion than you would get if you slow-mo a 30p/60i footage on a video editor by yourself). The 120fps mode is only available in QVGA mode. Check the video I put together using the Viewty while taped on a tripod (click here to go to the Vimeo page of the video and download the uploaded higher quality VGA version), or you can download an unprocessed DivX clip here to examine it better (straight out of the camera). The Viewty supports TV-out via a separately purchased cable, although the 320×240 and 176×144 resolutions are not supported for TV-out.

Overall, the Viewty is interesting, but it’s not refined. It feels that it was put together in a hurry, or that its engineers don’t have a UI engineer on board (or they just don’t listen to him ;-). It is nowhere as good as the iPhone, which is why its 5MP camera and multimedia abilities are there to help LG fight Apple’s product. It is cheaper than the iPhone though, and it supports 3G, plus some carriers in Europe are offering it as part of their default phone selections. This has helped the Viewty to equally compete against the iPhone — at least outside of the US.