Geeks.com was so kind as to send me the Vizio VX32L for review, a 32″ widescreen LCD TV capable of doing 1080i. At USD 469.99, this 32″ LCD television is quite affordable, so read on to find out if it is worth your money.The Vizio VX32L has the following specifications:

The television has a silver backplate, and the foot and speaker ‘beard’ are also finished in silver. The bezel around the actual display has a black piano finish, which looks quite stunning if you ask me – but as always, looks are extremely subjective. A fold runs through the middle of the speaker beard and the stand, which I find another nice touch. The Vizio logo doubles as the LED power indicator; it glows a soft white while powered on, and a very faint orange when powered off. This is yet another nice design touch. Luckily, the TV is large enough to have an internal power brick (don’t you just hate those external bricks?). 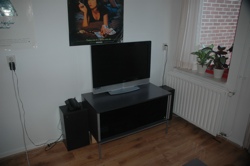 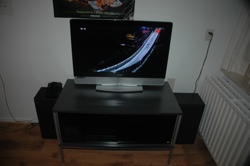 The build quality appears to be fairly good, although it cannot beat the quality of more expensive brands like JVC, Sony, or Philips. It is nothing to worry about, however, and squeezing the casing here and there reveals little in the forms of movements or squeaks (I hate squeaks). In other words, in this case, affordability does not mean bad build quality. The stand is removable, and you can use any VESA stand or wall mount instead.

In the television’s box you will find the TV itself (that was a relief), a power cord (yet another American power cord I do not use; I could move to the US and I would not have to buy a single new cord), a composite video cable with an RCA audio cable, the remote control (incl. batteries), and a manual and quick start poster.

Before I start talking about the TV itself, I want to focus on something else, something many electronics manufacturers get flat-out wrong, even the more expensive brands: usability. More specifically, the usability of the manual and the actual device combined. It is rare to find a manual that perfectly corresponds with the actual device it details, but Vizio has done this in such an outstanding way it almost made me cry tears of happiness. All the connections (more on that later) on the backplate are strictly colour coded, and these colour codes are re-used militantly throughout the manual and the quick start poster. In addition, the language used in the manual and quick start poster are clear, to the point, and understandable for even people with reduced brightness (like me). The manual also has a clear and detailed table of which connections give the best image quality, something less tech-savvy people will certainly appreciate.

So even though Vizio is a rather young American brand (founded in 1999, located in California), they seem to get something right that few of the established brands seem to get right: proper manuals. It is hard to precisely put into words what makes a manual ‘good’, but you can take it from me that Vizio is doing it right. Consumers seem to like Vizio, by the way, as they outsold all the bigger brands in the 2nd quarter of 2007 in the US.

Back to the TV. It has quite the number of I/O ports:

Obviously, the best way to connect video equipment is to use HDMI – sadly, my digital TV decoder (via cable) does not have an HDMI output; it only has a SCART port carrying S-Video or composite video signals – about the worst ways to transfer video. There is little I can do about this, apart from buying an HD decoder with HDMI support (EUR 200, out of the question so soon after the holiday season). Luckily, however, this brings me to another strong point of the Vizio: even though I am using a composite video cable (video experts will cringe, this is the worst possible way to transfer video apart from drawing it out yourself), image quality is still acceptable. I asked various friends and family members what they thought of the image quality (to eliminate possible rationalisation interference), and they were all positive. Of course, using HD content, or even using either HDMI or component cables, would yield much better results.

Obviously, there are signs that I am using composite video, especially when you are looking at fast moving imagery with bright colours. Especially my favourite colour, red, has problems with this. The problem is that the moving area with the brighter colours ‘tears apart’ into RGB, and even though this is barely noticable during normal TV programs, it gets more clearly visible during, for instance, fast-moving sports scenes. All in all, however, this TV has excellent upscaling technology on board, and the image quality using something as archaic as composite video is excellent. 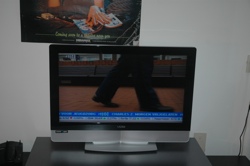 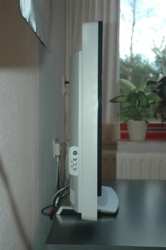 One note: I am so happy the world is standardising on HMDI/DVI connections. I was getting pretty tired of having to find out whether my SCART connections carry component or s-video signals; in addition, SCART is a European thing, so equipment from the US does not use it. HDMI solves these problems. Rejoice.

The on-screen display of the television is a joy to use. The options are organised quite logically, and the text labels are of a large font size so that they are easily readable. The settings are divided into four tabs: picture, audio, setup, and parental. The TV allows for a lot of tweaking, and it is advisable to spend a few moments with the manual (which is again very understandable and well-thought out in this section) and the remote control to tweak the picture quality – I have been able to improve quality quite significantly just by turning certain features on or off. Dynamic noise reduction, black level extender, white peak limiter, colour transient improvement, and dynamic contrast ratio; playing with these options can really improve the image quality. As is common with just about any TV these days, you can save various presets such as ‘movie’, ‘natural’, and ‘game’.

Two specific things about image quality stood out to me. Firstly, the black areas are truly black. It is only recently that some manufacturers have started to accentuate the importance of black being black, but even this fairly affordable TV gets it right. Sometimes, it is even hard to tell where the black of the display ends, and that of the bezel starts! This is a definitive improvement over my previous LCD TV or monitors.

Secondly: fonts. Dutch television uses subtitles for foreign content, instead of dubbing like Germans for instance do (ever heard Clint Eastwood shout ‘Handen hoch!’? Sure makes me laugh), and as such, I was afraid that having such a large screen filled with standard definition content would ruin the appearance of any fonts (and thus subtitles) on the screen. This turned out not to be the case: fonts are very, very crisp, whether we are talking subtitles or ‘ordinary’ on-screen fonts. This is a very big plus for me (even though I do not need subtitles in English, German, or even French, they are invaluable for just about any other language).

Even though I do not use the internal speakers (I route audio through my component HiFi set), I did perform my usual highly scientific (cough) test for speaker quality: playing Bjork’s “It’s Oh So Quiet” and “Army Of Me”. As usual with internal speakers on TVs and monitors, sound quality was downright appalling for “Army Of Me”, a song with deep bases and a full sound. The high pitched notes of “It’s Oh So Quiet” did better, but still felt canned, as if I was listening to a pair of EUR 3,- in-ear headphones. After trying out some more music, it became obvious that music relying on an overwhelming effect (some would call it wall of sound-ish) such as Marylin Manson’s “Mechanical Animals” or Garbage’s debut album and “Version 2.0” are definitely not suited for these speakers.

I hear you all thinking: “duh!”, but to me, there is no reason for manufacturers of TVs, monitors, and even laptops to include such limited speakers. I have seen some very small and slim design speakers over the years that were perfectly capable of producing decent sound output – not as good as proper wooden-cased three-way speakers (which I would call adequate for a normal household) of course, but still, acceptable seeing the limitations. I still cannot get over the fact that even up-market laptops (MacBook Pro anyone?) or displays are fitted with speakers I would barely want to see fit on my telephone.

For only USD 469.99, you are getting a whole lot of television (at least for Dutch standards, 32″ is reasonably large), with outstanding image quality, a plethora of input options, and a lot of ‘tweakability’ to make the image fit your personal needs. The manuals and the on-screen display are easy to use, and even less tech-savvy people will find their way around this television quite easily. The speaker quality is, sadly, again, appalling, but I hope this will be the next big thing for television makers to overcome.