Hi-Mobile.net sent us over one of the highest-end phones ever released, the Nokia N82. A rich smartphone, running the latest version of Symbian OS and S60 3.1 is sure to raise some eyebrowses as the model resembles in feature-set (of its time) and overall looks of the very successful 6680 that was first released in early 2005. In fact, the more I look at this model, the more I get the feeling that a product manager walked in at an engineering meeting one Monday morning and proclaimed: “Gentlemen, we need to resurrect the 6680“.The N82 is a quad-band EDGE smartphone with non-US HSDPA/WCDMA 2100 3G support. Its 16mil TFT 2.4″ screen is able to deliver a resolution of 240×320, while its microSD hot-swap card slot can support up to 4GBs according to the Nokia spec page (my guess is that it’s artificially limited in order to not compete with the 8GB storage version of the N81). The N82 comes with Wi-Fi 802.11 b/g with UPnP technology and VoIP support, Bluetooth 2.0 with A2DP/AVRCP support, a built-in GPS receiver, a motion sensor (which auto-rotates the UI depending how you are holding the phone), stereo FM radio, TV-out, a QVGA video call camera, and a 5MP Carl Zeiss camera with a Xenon flash. The phone uses an ARM11 at 332Mhz, 128 MB RAM, 256 MB of storage out of which 100 MBs are available for the user, and finally, a 3D graphics hardware accelerator. 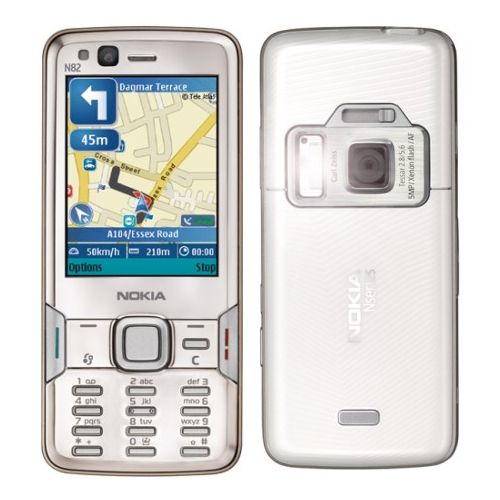 In the box we found the phone, a 1050 mAh battery, a standard Nokia charger, a USB data cable (not used for re-charging), a TV-out composite cable, a 2GB microSD, and a 3.5mm headphones/handsfree. The N82 comes in a silver color and despite all its features, it weighs just 114 grams. In fact, I dare to say that overall, it’s the same size as the iPhone, even if in comparison the N82 will look thicker. If you take into account the extra features it’s got, technologically speaking Nokia is delivering a “same overall volume” phone as the iPhone. Regarding its functionality, the N82 had great battery life and excellent reception. Audio voice quality was very good too, one of the best we’ve seen lately. Bluetooth worked very steadily and was very fast, and WiFi too. One interesting thing was though that it would refuse to connect to our wifi router without that router being connected itself to the internet. Sure, if your wifi router is not connected to the net via a DSL/Cable modem you can’t get access to the net, however, if you just want local usage of WiFi the “WLAN Scanning” application should not refuse to connect. I don’t know if the error happens because it tries to send data to nokia’s servers or anything like that, this is something that our hacker readers should look up, it’s just something that I found peculiar.

On the right side of the phone you will find stereo speakers, a volume up/down set of buttons, a camera button and a “gallery” button that loads an application with your media. On the left side you will find the microSD slot, the charger port, and the microUSB port. It is a shame that Nokia did not continue the tradition of using the much more standard miniUSB port they used in some of their other models, as the N82’s thickness is plenty enough for the miniUSB port. On the top, you will find the 3.5mm jack and the on/off button. At the back, there’s a Xenon flash and the 5MP camera which comes with a protective sleeve. On the front, you will find all the usual S60 buttons, plus the videocall camera on the upper left of the device.

The N82 is much focused on multimedia. It’s got at least 2-3 apps that the only thing they do is to find media and load other playback applications, and for me this is a bit too much as themselves are not playback apps. Nevertheless, you will also find a pretty good audio application, a stereo FM app, Real Player for streaming and video playback, podcasting, the infamous music store that Nokia recently announced, the LifeBlog application and more. Playing back h.264 and MPEG4-SP files on the N82 was an easy job and the speed and quality delivered was very good. Other formats supported at 3GPP formats (H.263) and RealVideo 7,8,9/10. Other features include audio equalizer, audio recorder in AMR format, audio streaming and support for AAC, AAC+, eAAC+, MP3, MP4, M4A, WMA, AMR-NB, AMR-WB, Mobile XMF, SP-MIDI, MIDI Tones (poly 64), RealAudio 7,8,10, True tones, and WAV. It also supports Flash Lite 2.0, but hopefully in a future firmware upgrade version Flash Lite 3.0 will be included, as it has full youtube support.

Other applications in the phone are the standard messaging app, VoIP (works great with GizmoProject), the Nokia Search application that can search both the internet and the phone, PTT, UPnP as both a server and a client, the WebKit-based browser and of course the GPS support. The N82 seems to have fewer problems locating a satellite than my N95 has and so this was extra nice. The N82 also supports PDF reading and comes with QuickOffice for document reading. Other applications include Notes, Clock, Converter, File manager, calendar and more. Java support is as speedier as ever. I won’t get into more detail on the application side because S60 phones use pretty much the same applications and so I will be repeating myself to no end with all the Nokia phones I’ve reviewed so far.

Nevertheless, a particular new application requires some mentioning. That’s the N-Gage platform support. While it’s not ready yet for download, the N82 is NGage-ready. It has a 3D accelerator in it, and it came pre-installed with two 3D games to showcase the platform. I would normally get very exciting about fast, and good-looking 3D games on a phone, but something is holding me back. And that’s the keypad usability of the N82. It’s terrible. I can’t type fast and precise with that keypad on normal operations, let alone play a game that requires extra speed! The biggest problem is the 4-way joystick. It’s mushy, and not rigid. It keeps doing things I don’t want to do just because it’s so imprecise. One thing I don’t understand is that after over 100 models of phones that Nokia has released, why they haven’t found the best average way that the average costumer likes his keypad to be and then stick with that design. Honestly, I don’t get it. If I had such a high profile company I would take the average user experience on the various keypad designs I had offered in the past and create one that’s overall as good as it can be. It can’t be perfect as there’s always room for improvements, but it can come close because you will use prior knowledge to design something. Instead, all we see manufacturers do is play with random industrial designs and pick different ones on different phone models just so the models look visually refreshed. How non-pragmatic.

On a better note about the N82 you will find the 5MP CMOS camera and its VGA video recording. It’s as good as it gets. Both the application that let’s you control the camera and the camera quality itself is top notch. It has autofocus support, Carl Zeiss Optics, a very powerful flash, red-eye reduction support, a self timer, image stabilization and exposure/night mode support. You can also use the secondary camera for pictures/video. The secondary camera grabs video at QCIF at 15fps. Overall, the N82 takes better pictures than the LG Vewty we reviewed two weeks ago, but worse video. Main camera video sample here and secondary camera video sample here (please right click to “save as” the videos and view them offline).

Without a doubt, users who want to buy a high-end Nokia smartphone these days might get confused between the N82 and the N81-8GB as the two models come in very similar prices and feature-sets. The major differences between the two models are easily found if you put the two main specifications side by side (e.g. camera, 3D and GPS differences), so I will provide now some differences that are not immediately visible from most spec pages on the internet: the N81 can only capture QVGA video at 15fps instead of 30fps even if its capable of doing so, the N82 has a cap on its microSD capacity at 4GBs, the N81 only has WCDMA and not HSDPA, the N81 has less storage and 96 MB of RAM instead of 128 but it has a faster CPU at 369 Mhz, the N82 has OMA Device Management v1.2 support while the N81 has 1.1.2, the N81 has HID and GAP additional Bluetooth profiles, the N81 has “presence” support and higher standby battery life. So pick wisely.

This is a very nice phone, highly recommended, losing points only on its non-standard USB port and bad keypad. But other than that, it’s one of the best new phones in the market right now so take notice!