The envelope had been lying there on the minimalist desk all throughout Jobs’ keynote. The rumours had been clear: Apple is going to launch a subnotebook, a sort of MacBook Mini. Despite the rumours, the collective gasp of amazement was clearly audible when Jobs pulled the MacBook Air out of the envelope. I have to admit, even I was all wowed. Consequently, you can imagine I was delighted when Apple NL agreed to loan me a review unit as soon as they had the MacBook Air in stock. Read on for the review.

Apart from the ‘wow’ feeling when I first saw the MacBook Air, I immediately had my doubts too. The device was light, thin, good looking, yes – but also appeared to be awfully limited, with barely any input/output options, no optical drive, and no upgradability of any mentionable kind. Even though these might not exactly be features one would look for in a notebook of the MacBook Air type, it did worry me, especially seeing the fairly hefty price tag.

In any case, I now have the MacBook Air, I have been testing it for a while now, so I can now see if my reservations had any validity.

They sent me the following configuration:

They also included the USB-to-ethernet adapter and the external USB SuperDrive.

The MacBook Air comes in black packaging, and when you first pick up the box you actually wonder if they put bricks in there – the box is heavy. In fact, the empty box of the Air is much heavier than the Air itself, which only illustrates how light this notebook actually is. After unboxing the whole thing, and holding the Air in my hands for the first time, I have to admit that my usual cynical self was nowhere to be found – I was absolutely baffled by the thinness and lightness of the MacBook Air. I kept turning it around in my hands, weighing it, and seeing how many fingers I needed to pick it up. Do you remember Apple using the “Where did the computer go?” tagline for the iMac G5? Trust me, you ain’t seen nothing yet. 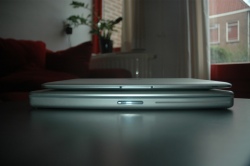 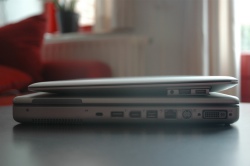 Simply put, the MacBook Air is a normal MacBook, made out of aluminium, squashed to a third of its thickness. This is a completely different approach to ultra-portable notebooks than many other manufacturers have taken.

I subjected the MacBook Air to a ‘wow’ test. This is a simple test that you can perform on just about any item; just show it to your friends and family, and see how many times people go ‘wow!’ or something similar. I always got a whole lot of ‘wows’ when people saw my Cube, but that was nothing compared to the amount of ‘wows’ the Air received. Boys, girls, young, old: they were all drawn towards the Air, they wanted to hold it, pet it, and play with it. This machine has a seriously high ‘wow-factor’.

The build quality seems excellent, but despite what other reviewers have said, this device does in fact flex quite easily. I could get various surfaces and corners to bend fairly easily by applying minimal amounts of pressure. In other words, I am not so sure about its sturdiness as many other reviewers and bloggers have been. Since I am not rich, and oh, also because this MacBook Air is actually not mine, I do not have the means to actually test its durability properly.

Looks are, of course, heavily subjective, but personally, I really like the looks of the device. It has more curved surfaces than Apple’s other notebooks, giving it a distinctive look, even from a distance. Its exterior surface is completely smooth, except for the collapsable ‘slot bay’ (and a few other obvious things like air vents and the rubber feet). As soon as you open the device, you will notice the black keys of the keyboard, the large touchpad, and the apparent lack of speakers. 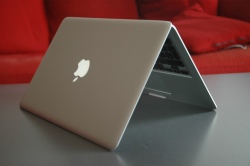 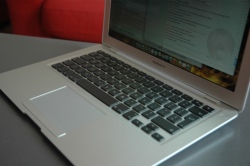