Every now and then, a computer comes along that makes a mark, that sets a trend, or that simply stuns you – but not because of its internals, its processor or its software, but because of its appearance. Through the history of computing, there have been a number of computers that were actually designed to appeal not just because of raw technology alone, but also because of stunning looks. Read on for a countdown of my ten most beautiful computers.

Most likely the weirdest one of the bunch. I stumbled upon this machine while doing some normal browsing, and it stuck – and not only because of its use of red (I have an obsession with the colour red). That white plateau is actually a cutting board, where the wife (yes, back then, in 1969, it was the wife) could prepare the food she was cooking for her loving, hard-working husband and children. This computer was nothing more than a recipe storage device, and its designers were smart enough to allow the wife to prepare the recipe without having to move away from the computer’s ‘display’, a set of binary lights.

The machine had a 2.5Mhz processor, 4kb of core magnetic memory, and had some recipes pre-programmed, since learning how to program any new recipes into the device took two weeks. In all honesty – I could not care less. I love the machine because it is red, has a cutting board built-in, and is like nothing you have ever seen before (or will be seeing). And for USD 10600, it came with a cookbook and an apron. I mean, I dare you to resist that.

Readers of the popular webcomic User Friendly will know the SGI O2 as the body for the Erwin character, an artificial intelligence written in COBOL. Most people, however, will remember it as the last entry-level workstation by the once proud Silicon Graphics, Inc., introduced in 1996. It came with a single MIPS processor running anywhere between 150 and 400Mhz. It could house up to 1GB of proprietary SDRAM memory. It obviously ran SGI’s own IRIX operating system, but could run a selection of BSDs and Linux too. 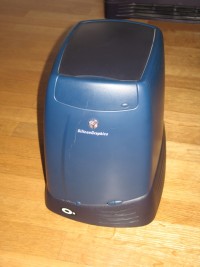 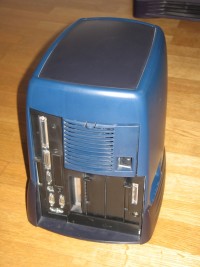 I do not really know why I like the O2’s design so much. I usually refer to it as “the blob”, because let’s be honest, it sure does look like one. I guess my fascination for the O2 comes from the fact that, just like the H316, it is unique in its design. It is not a desktop, it is not a regular tower – it is special. May I coin the “blob form-factor”?

A machine that needs no introduction, but might need some justification instead. Some will say it is not a traditional computer like the others on this list, but I beg to differ. A gaming computer is still a computer, and since this thing can run a version of Linux fully blessed by Sony, I see no reason not to include the best-selling game console of all time on my list of ten most beautiful computers. 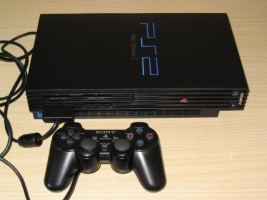 What I like about the PlayStation 2 was its unusual design (back then) for a game console. It lacked the playfulness of most other consoles of its era, and focused more on an industrial and hardcore image. I love the ‘ridges’, which remind me of NeXT’s hardware, and the fact that you can position it both vertically as well as horizontally (with a twisting PS logo to match).