As you may remember from our series on common usability terms, I have a lot of interest in graphical user interface concepts. In addition, I applaud anyone trying to improve existing concepts, people that try to think beyond set conventions to come up with an improved version of that concept, or a new concept altogether. Thorsten Wilms took on the well-established concept of the scrollbar, and came up with a few interesting tweaks.His idea is one of those things that are hard to explain by textual means – hence the video he made, which he put on YouTube for us all to see. 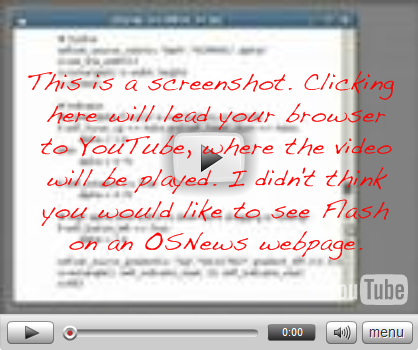 While I applaud the efforts made by Wilms (I already noted his email to gnome-usability), I have difficulties seeing the exact problems this new type of scrollbar tries to resolve. When observing my friends, who are almost all decidedly not computer savvy, I see that they use the scroll wheel for minor scrolling, and the ‘scroll blob’, as I like to call it, for heavier scrolling (like jumping to specific sections of a page). Of course, this is completely unscientific, but I think it’s rather representative for most people out there. I’ve never seen anyone frantically turning the scroll wheel, only to be amazed by being pointed to the scroll blob – or vice versa. In other words, what problem does this new type of scrollbar address?

The only thing I can see is that when the scroll blob becomes too small, the act of being able to click and drag in the entire scroll bar to scroll can be quite handy. However, I would argue that scroll blobs becoming too small is not an inherent problem of the current scroll bar concept itself, but of the underlying toolkit instead: scroll blobs should always remain big enough to remain an easy target: you know, usability’s favourite dead horse, Fitts’ Law. In other words: this is a low-level problem, that you really shouldn’t try to fix with a high-level solution.

This leaves us with the ever important question of whether or not to embrace a new UI concept: is the problem that the new concept tries to address big enough to justify learning that new concept? Seeing the relative complexity of Wilms’ scroll bar, I tend to answer that question with ‘no’.

Feel free to disagree in the comments.