For those who follow my latest activities since I scaled down my OSNews participation, they know that videography has been it. Recently I tried to get more serious about it and so last week I shot a music video clip for a local Bay Area indie band, the HIJK (song is available for free download on their site). Should not be a surprise either that two out of the three band members are actually software engineers, this is the Silicon Valley after all. The following is an account of how I did everything and I also give some pointers on how to help your own favorite local indie bands with some video promotion. I find it to be one of the many ways to stick it to the RIAA and their status quo in the market. Update: Added a small making-of video.

View in HD or download the high-quality HD version of the video here.

The first stage is to find a band you like. Shooting for bands that you might not like their music won’t be that much of fun. Use GarageBand, or CDBaby, or Myspace to find local indie bands that you find interesting and you enjoy their music. Then, email them (usually they are easy to contact) and ask them if they would like you to shoot a music video clip for. If all goes well, you will soon have a shooting date setup. It’s important to discuss with the band beforehand what kind of video they would like to have done, and if necessary, secure some locations.

Of course, you should have a camera ready too. I highly recommend the Canon HV20 or HV30 as they are cheapest cameras in the market today that offer (close to) prosumer quality and have some advanced features like 24p and a special cinematic gamma curve (“cinemode”). Sure, everyone hates tape (myself included), but if you are after quality, you will have to wait one more year before consumer AVCHD cameras overtake the HV-series in overall picture quality and features. There are at least 100 official music videos that I know of that were shot with the HV20. That’s more than any other consumer camera below $1000 ever enjoyed.

If you look very carefully, all the professional music video clips since the ’80s are slow-motioned. Even the ones that you don’t realize that they are. This gives music video clips a familiar, and magical, look. To achieve this, you need to rip the band’s song directly to WAV (not mp3 or ogg or anything else that’s compressed), speed it up 25% using Audacity (tempo/pitch all sped up), save back as WAV, and then burn an audio CD with it. The band will have to rehearse the song in that sped up manner prior to shooting. 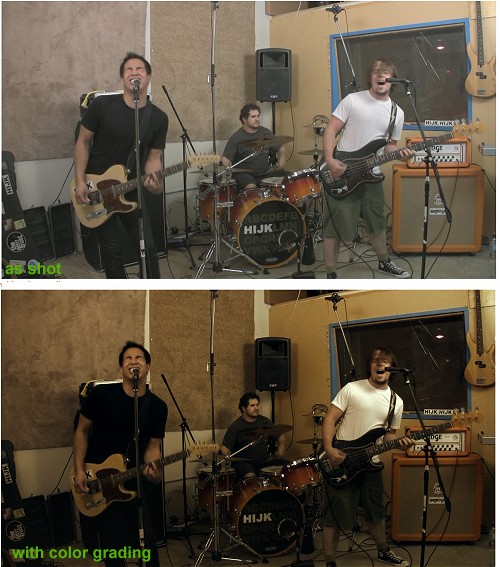 Get a lot of takes and frame them slightly differently each time (that’s one mistake I made, and so I ended up having not much footage to work with). At least twice for the whole band, and twice for each band member. You will need a really powerful CD player and speakers to playback the sped up audio really loud, so the drummer can guide the band. If you only have a small CD player with you, the band members might have to wear small earphones to play along the song.

The most important piece of equipment I had with me last week (besides the tripod), were the two 500Watt lights. Without them, we would be looking at really sub-par image quality right now. I got these lights only a few days before the shooting, but it appears to be the best purchase I’ve done in a while. It makes a huge difference. If you can’t afford 500 Watt lights for $280, there are some cheaper ones for $110 at 250Watts. Still better than nothing. If you are shooting outdoors, consider getting a reflector ($100).

The second most important part I had with me was the WD-H43 wide-angle adapter for my HV20. Without it, the three band members would not have fit in the frame, given that the studio room was pretty crammed and the tripod was literally as far back as possible, at the door.

The third most important tool was my $4 gray card. Each time we would change a setting, or the light conditions changed, we re-did the white balance using our gray card. Exposure was manually modified and locked each time too, I didn’t use “auto mode” in the camera.

My steady-cam was pretty useful too. All the shots involving the close-ups was using the steady-cam. If you can’t afford a real steadycam consider this one for $40 (or $14 if you assemble it yourself), which is actually pretty good and does the job.

Last but not least: make up. Nothing fancy, just enough so that the faces don’t shine on camera too much. 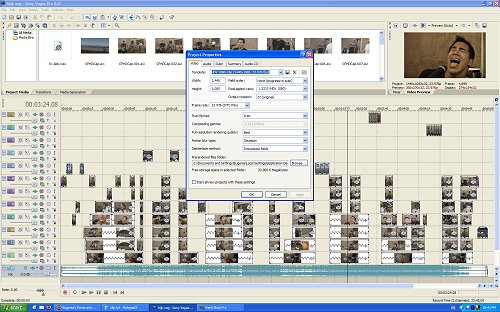 In post processing, you must bring back the the audio to the normal speed/pitch. You do that by putting in the timeline of your video editor the non-sped up WAV file (again, stay away from compressed audio as they don’t play back 100% in sync with audio CDs that the band performed on). Then, you drag each take on its own video track, and you make the video to playback at 0.800x. When carefully sync the clips to the WAV, you will see that the video now has a slow-motion feel, while the lyrics are all sync’ed up.

One thing I learned about this experience is that you can’t have enough RAM and enough video tracks on a video editor. Anyone who might have said that “1 GB of RAM” and “support for 4 video tracks” is enough for any PC or video editor, was lying. My PC used 2.5 GBs of RAM while editing/exporting (with Firefox/LiveMail/Trillian loaded up too), and I used 12 video tracks on my Sony Vegas Pro 8 for the project.

From that point on, use your imagination on how to actually edit the video. For rock videos is recommended you have very few seconds of each scene, sometimes even less than a second. Just give it a fast pace.

UPDATE: I have an adjusted workflow and more explanation how it all works here.

One thing that you should never forget about music video clips is color grading. Grading is an essential part of music video clips, exactly because they boost the artistic value of the video — in fact, I find it closely related artistically to the music itself. I personally shot with my HV20 in “Cinemode” and “Neutral Color” setting. This gives me the most dull-looking output which makes it ideal for color grading. You see, consumer cameras tend to over-saturate by default in order to sell cameras to mama and papa. But an over-saturated footage just doesn’t grade well, so you will have to get one of these recent HD Canon cameras which have this added ability to offer gamma curves that are more in line with some film cameras or even the RED (if you see an un-graded Hollywood movie you will understand what I am talking about and how dull that footage looks too as shot).

For color grading I used Vegas’ 3-way color corrector that also offers gamma, saturation and gain controls, Unsharpen Mask, and the king of consumer/prosumer color grading, the Magic Bullet software package ($400). It is a lot more than changing the contrast and saturation, so you will have to experiment to get the look you like.

Knowing all this now I would probably have done a few things better (I should have shot much more footage, in and out of the studio), but for a first effort I think it’s a decent result. I had a great time shooting and putting this project together! So, feel ready to take the plunge and help out your local indie bands?