Several open source applications are available on both Linux as well as Windows. This gave Mohammed Saleh the idea of comparing the performance of various of these applications on both Ubuntu 8.04 as well as Windows XP SP3, to see which of the two performed better with certain applications. The results were rather interesting.The tests he performed could be more or less grouped into multimedia related tests (Blender, Avidemux, etc.) and hard disk performance tests (the command line RAR utility and ClamAV). The results seem to indicate that Windows XP beats Ubuntu hands-down when it comes to multimedia related applications, and Ubuntu has the advantage in IO intensive applications.

Saleh also did a multitasking test. He wrote a script which performed several tasks simultaneously to see which of the two operating systems was better at multitasking. This time, Ubuntu beat Windows by a wide margin. 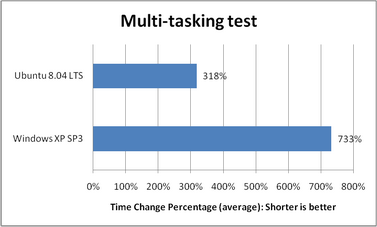 The methodology of the test appears to be fairly sound. The tests were performed on the exact same machine, except for one tiny detail: Windows XP was installed on a SATA disk, while Ubuntu had to settle for an ATA one. Interestingly, Ubuntu still outperformed Windows XP on IO intensive tasks.

Just so you know.