Late June this year, the MorphOS team released the long-awaited MorphOS 2.0 release. It delivered a lot of needed new features, such as 3D support and a network stack. Despite the long list of new features, criticism was abound, mostly due to the high price (EUR 150), and the fact that it only ran on Pegasos and Efika hardware. Today, the MorphOS team released the first update to 2.0, aptly named MorphOS 2.1. Apart from that, there’s news on the Mac Mini port of MorphOS.

The release notes for MorphOS 2.1 are quite extensive, but the most important changes are a sound driver for Efika boards, a 2D driver for the XGI Volari V3XT graphics card, and a virtual CybergraphX monitor, so you can use MorphOS through VNCServer without a video card.

Related to this is news from MorphOS core team member Piru, who has given out some details about the Mac Mini port of MorphOS. It now runs on all revisions of the Mac Mini, as long as it has a Radeon video card. He also uploaded a nice screenshot to prove their hard work. Sadly, he couldn’t give a release date estimate. 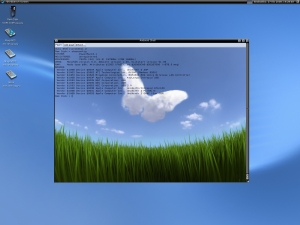