Our friends at Geeks.com, known for their cheap laptops offers, sent in one of the most popular netbooks around: the Asus Eee PC. The model is the 701 4G, with 512 MB RAM, and Windows XP in it. Read through for a review of the product.

The netbook is very small, as you can see from the picture, it is very easy to carry, and very lightweight. Size-wise it makes it a perfect companion for your travels and small local trips. It’s also a good solution for university students who don’t type too much during lectures (as typing on its small keyboard can be a bit difficult). In my opinion it’s a better solution than the Nokia N810 internet tablet, as it is faster, and a bigger keyboard. But some might think differently.

I found construction to be very good for the price. Even if Bluetooth is missing, overall I found the amount of hardware features on the product a good blend. The laptop does not run too hot, it is very stable, and it’s responsive. The screen has 4 different dim settings and it’s bright and well lit. Its webcam and onboard mic have a good quality too. When a webcam drives you to do funny faces for it rather than turning it off immediately, it’s a good thing. The speaker is loud and of better quality than in some of the bigger laptops (better than my Powerbook’s).

Asus also ships a variant of the laptop with a special version of Xandros. The Eee PC 701 is also compatible with this new Ubuntu-derived distro, the Ubuntu Eee. The distro installs all the needed drivers and makes your 701 work well with Linux. Unfortunately, using Ubuntu’s official updates might be messy though, as if you let it overwrite your custom kernel, you might end up without proper support for your Eee.

I will focus on five points regarding this laptop: screen resolution, internal storage, memory, speed, and battery life, as everything else was as good as expected. 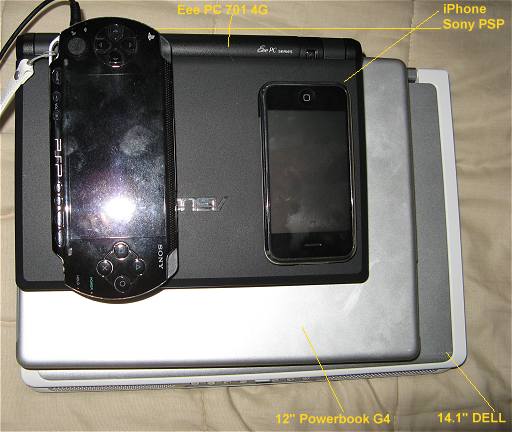 The 800×480 screen is small for some websites. The primary usage of such netbooks is internet browsing, email and IM, so while this resolution is fine for email and IM, when it comes to browsing, it’s not always enough. Our OSNews, News.com, CNN, Yahoo, Engadget, Gizmodo and many other popular sites, all need 1024 pixels wide to render their site. The good thing is that most of these sites have columns, so you just need to scroll once in the appropriate column to get the piece of information you need without further scrolling.

A bigger problem is that many third party utilities (and a few Windows ones), don’t fit in 480 pixels vertically. For example, using the preference panels of both Gaim and Trillian was an exercise in patience. Thankfully, Asus includes a daemon that auto-loads each time you log in to your account, which lets you choose between 800×480 and 800×600 resolutions, but some of Gaim’s panels still don’t fit in 600 px vertically. And this was the reason why I decided to get XP and not install Ubuntu on this netbook (I am not interested in Xandros you see): many GTK+ utilities or preference panels require 700px vertically to fit. While XP’s apps are not immune to the problem, the apps I use that have the problem are certainly smaller in numbers than the ones using GTK+ under Linux. Anyways, this is not a huge problem, as after the initial configuration of the machine, you will probably be ok.

The 4 GB SSD is not enough (~1.3 GB was free originally). The machine comes with Windows XP SP2, but it is not possible to install SP3 (not enough free space, claims the installer) without first removing all the “un-installation files” of previous Windows updates that Asus applied, remove restore points, compress unused files, and even remove some other files manually (e.g. the 90 MB Adobe setup files that are not needed anymore but Asus ships with anyway). If you don’t feel confident deleting so many system files, then your only way towards SP3 is to delete the MS Works installation (400 MB) to make some space for it. I find it inconceivable to sell a machine where it’s not updateable by official means as shipped, especially as this is an internet machine and security is so important. Personally, I have streamlined my installation (with a huge risk, of course), by deleting a lot of things that are presumably not exactly needed, and so now I have 1.1 GB of storage left (just 300 MB of swap, Firefox, Trillian Pro, Quicktime but not iTunes (required by Trillian in order for the webcam to work), Gaim, PaintShopPro 5, VLC, Windows Defender, and AVG Free AntiVirus installed.) I read that other 701 users had to create manually special XP bootable CDs with SP3 already applied in order to get it installed… A mess.

The 512 MB of RAM are enough for a basic XP installation, but after installing the AVG anti-virus and Windows Defender (both needed for this internet market this product strives for), the RAM consumption sky-rocketed from 180 MB originally, to 300 MB. Having Firefox, Trillian/Gaim, and Live Mail opened all at the same time is not recommended, because you will run out of RAM (and swap, if you are forced to have very little of it in order to save storage space). Especially if you also need to turn ON indexing on the drive and install Microsoft’s terrible “Desktop Search” utility (without it Live Mail refuses to search inside emails), then you will see a typical RAM usage of 600+ MBs. Now, this is not too bad in 512 MBs, believe it or not, but as I said, when your swap is also small because of the SSD size constraints, then you can bring the machine to its knees and even see crashes. Personally, I just use Firefox and Gaim, and never ran out of swap so far. I guess the consensus here is: don’t use Live Mail and don’t install Desktop Search (Outlook Express is still good enough and requires very little RAM).

I am happy with the speed of the machine, even when under-clocked at 630 Mhz by default. Browsing speed is good, and I had no problems at all with the speed of the SSD and XP. Common usage felt as speedy as my P4 3Ghz, and web browsing on sites like OSNews did too. Because though, as you probably know, I am more into video production lately rather than OS news, I need some good Flash video performance. I found that this machine, at 630 Mhz, is a bit faster than my Powerbook 12″ 867 Mhz G4. When using the freeware utility Eeectl to boost the CPU speed to its natural 900 Mhz, the Eee PC becomes significantly faster than my old Powerbook.

I am pretty sure that netbooks using the Intel Atom 1.6Ghz instead are significantly faster than the Celeron M 900 Mhz. Based on some benchmarks I’ve seen, I’d say that they would almost rival my P4 3Ghz desktop in some operations, including online Flash video.

I don’t mean to be negative. I really don’t. I love these cute little machines. That’s why I asked one for a review. But if you think that what you just read was somewhat negative, you haven’t read the battery section yet.

So, the Eee PC 701 and 900 series have this major (hardware?) bug, where battery would drain when on sleep or when the laptop is completely off. Sure, all laptops do that, but not at this rate. The Eee PC 701 has 23 hours of standby (sleep) battery life, and 9 days when powered off. In contrast, my Powerbook and my DELL Inspiron laptops have 6 days to 10 days of sleep battery life, and 2-3 months of power off battery life (and we are talking about old batteries already, not brand new ones like in the Eee PC). This of course, makes this machine utterly useless for a “on the go” machine. The only workaround found so far by the community is to shutdown the OS and remove completely the battery when not using it.

The Eee community awaits for a new BIOS version to hopefully fix the problem (if it’s fixable via software). Otherwise, I believe it’s only fair for Asus to recall these laptops or provide free service plans, and if they don’t do that, to get sued big time by their customers. It’s one thing to say “this is a cheap product”, and another to completely diminish the value of a netbook (which is to be on the go extensively). This is like someone sells you a small, cheap, low-in-oil consumption when-in-use car, only to find out that all your oil is drained overnight while parked. Come on, are we serious now?

Regarding normal usage, the netbook has a good battery life, at around 3 hours of usage, with WiFi on. No complaint there.

Get an Atom-based netbook with enough storage and screen resolution. I would suggest either DELL’s new Mini 9, or Asus’ own 1000H, or the Acer Aspire One or MSI Wind. Just stay clear from the Asus 701 and 900 series. The 901 series is a good choice too (no power drain problem you see). Geeks sells the Acer Aspire One for just $25 over the Asus Eee PC 701, so that should be a no brainer.