Oh, batteries — technology’s weakest link. Back when we mostly needed them to run pocket calculators and wristwatches, things were good. The future was now, and the world was electrical. Now that the world really is electrical, and gadgets the size of those pocket calculators are sporting the computing power of yesterdays Crays, we’re in trouble. Please excuse the fanboyism, but I’m a big fan of the iPhone, for all its flaws. With all battery-powered computing devices, you have to make some tradeoffs between processor power and battery life, but I think Apple did a pretty good job. Nevertheless, if you sit down for a protracted web browsing session, the combination of the screen and the radio really drain that battery. After an hour, you’re pretty much dead. What to do?

Until someone figures out how to make Nicola Tesla’s wireless energy transfer work, it’s all about adding more battery power. And until there’s a big breakthrough in battery technology, it’s going to mean adding more bulky cells to your device. For day-to-day use, the iPhone’s built-in battery power is largely sufficient. As long as its battery doesn’t run out before I plug it in for the night, it serves my purpose day-to-day. But if I find myself needing more than the average battery capacity, I’d rather not have to go find myself an electrical outlet and sit there for hours waiting for it to charge. Enter the Mophie JuicePack.

The JuicePack is a simple concept. It looks like a slip-on iPhone case with a bulgy back. It makes the iPhone roughly twice its regular thickness — more or less the thickness of the trusty Nokia cell phone I used years ago. You charge the JuicePack using a standard Mini-USB plug, and it has an LED battery level indicator on the back that’s similar to the kind on a MacBook battery. When you slide the iPhone into the JuicePack, it thinks it’s been plugged into the wall. It charges up the internal battery while draining the JuicePack. Once the JuicePack is empty, you can slide it back off, leaving the iPhone’s battery fully-charged.

Now one of the problems with the JuicePack is that when the phone is plugged into it, it thinks it’s plugged into the wall, so it will suck down the JuicePack’s electricity pretty quickly. Even if the iPhone is just sitting on standby doing nothing, but has a full charge, it will discharge the JuicePack more quickly than it ought to, it seems. For this reason, I’d recommend using the JuicePack as a supplement, but not keeping a fully-charged iPhone sitting in the JuicePack all the time.

Normally I wouldn’t think that a relatively straightforward accessory like the JuicePack would merit an OSNews review. People who needed more battery life would just buy one, and that would be that. But every time one of my iPhone-using friends or colleagues sees me with it, they scream and jump up and down like a “Price is Right” contestant. Okay, I exaggerate. But they’re pretty enthusiastic. The battery boost is a big deal, and apparently nobody knows that the solution is so easy.

I just keep a charged-up JuicePack in my briefcase, and when I need more juice, there’s no searching for an outlet. In my tests of the JuicePack under various workloads, I find that it more than doubles the iPhone’s battery life. That makes it good for watching a couple of feature-length films on a long flight, or several hours of web browsing. The JuicePack web site contains the usual battery-life hyperbole, stating that it will give you an additional 7 hours of video playback and six more hours of internet use. Like every laptop advertised, these numbers are optimistic. My informal tests show more like three extra hours of video and two more hours of internet. Nevertheless, it surely improves the iPhone’s built-in battery.

Check it out at Amazon: Mophie Juice Pack

The major downside? It’s $99.95, which is about twice as much as I wish it were. But nobody seems to be making a competing product at the $50 price point, so take it or leave it.

Also be on the lookout for the JuicePack Air, which is similar to the JuicePack but is designed to be “worn” by the iPhone in a more-permanent way, as a protective case. It’s not going to be released until “Spring 2009” so I can’t really compare it to the regular JuicePack except from the photos (see below). Personally, I’d rather just have the JuicePack to slip on every once in a while. 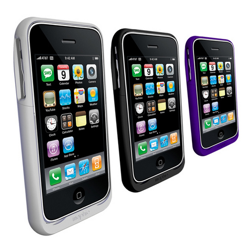