Geeks.com, home of cheap iPods, sent us in the 4th Gen Apple iPod Nano to take it for a spin. Let’s see how it stacks up against the 1st generation Nano that we also happen to have available in our lab, and the iPod Touch.

This refurbished model only comes with a USB cable and headphones in a generic box, it’s missing the dock adapter and the Quick Start guide. The player was in perfect condition when we received it. It weighs just 1.3 ounces (36.8 grams) and with a depth of just 0.24 inches (6.2 mm), it’s one of the thinnest players ever. I can wrap this iPod in my palm, and this gives me a weird feeling as it’s the only gadget I own that I can do that to it. It almost feels “vulnerable” without a hard case in my hands, but build quality is good and re-assuring.

The model we received has 8 GB of storage, enough for over 3,000 AAC/MP3 songs. Other supported formats include Apple Lossless, Audible and WAV. It can also playback VGA h.264 video at 30 fps, JPEG pictures, and it also has the ability to setup alarms, contacts, have a calendar, and text notes. It comes with three pre-installed games, and a few more can be purchased through the iTunes Store. 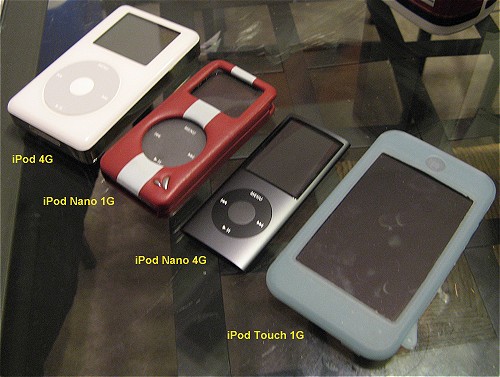 The 4th Generation Nano has a new iPod interface that is very well designed. It builds upon the previous generations, but now it has something that resembles a “visual statusbar” in the front screen, depending which menu item is selected. For example, if you choose “Music”, you will see the album art scroll down beautifully across the screen. Other new UI features include long-clicking on the main button to bring up a special menu when in the music mode: “Start Genius”, “Add to On-The-Go”, “Browse Album”, “Browse Artist”, and “Cancel”. Finally, there is now support for the impressive CoverFlow when you tilt the device horizontally, while if you shake the device, the songs will shuffle among all the songs or in the playlist currently activated.

Other, older, but still priceless features are still there, like gapless playback, an underrated feature among other players (Pink Floyd anyone?). There is also volume limit support, password locking, good EQ support, and a number of other languages including Greek — my own native language. The UI for video and picture viewing is equally good, but in the limited space of 8 GBs and 2″ screen, music takes a precedence. The screen is gorgeous, way better than the 1st Generation iPod Nano we compared it against. Even the “hold” button feels better than in the first iPod Nano!

Battery life is of course phenomenal, peaking at around 22 hours of music playback in our test with mixed AAC and mp3 files (mostly mp3 files). Stability was amazing too, we never saw a crash or mis-behavior from the player, given that we have for every other mp3 player in the market that we happened to get our hands on.

There are a few things that could be better on this iPod though. For one, the iPod connector and the headphone jack are too close together, so you can’t have easily the iPod connected to power, and also use serious headphones at the same time — headphones that have usually a thicker connector base than the iPod headphones. For my husband’s office iPod usage for example, this is a problem.

Other small problems are that you now need to have your album art all taken care perfectly in your iTunes installation, as the UI now is very visually-based. The good news about this is that this new Nano codebase does not have the same bug that my iPod Touch has: album art added by the user does not always show up on the Touch (some do, some don’t). The Nano is more consistent: if iTunes recognizes the album art, so it would do too.

The last small problem is Genius (both on the iPod and the iTunes side). As I have blogged in the past, Genius does not seem to base its results in the actual music sub-genre — which is what I am after. I am a lot into shoegazing for example, and finding similar such new music on my own on the iTunes Store is not easy.

Overall though, this is perfect for what it is: an ultra-portable mp3 player. Does the job, and it does it better than any other player in its category. Highly recommended if you already don’t own an iPod, or you don’t need a lot of storage.