Home > macOS > Building a Hackintosh Apple Can’t Sue You For

Getting Mac OS X up and running on a computer without an Apple label has always been a bit of a hassle. You needed customised Mac OS X disks, updates would ruin all your hard work, and there was lots of fiddling with EFI and the likes. Ever since the release of boot-132, this is no longer the case. Read on for how setting up a “Hack”intosh really is as easy as 1, 3, 2.

The most well-known way of setting up a Hackintosh is to download a hacked Mac OS X Leopard image, burn it to a disk, and go from there. This method, while easy, has several disadvantages. First of all, if you’re in the United States, or another country with DMCA-like laws, this hacking can actually be against the law, and as such, it might not be a wise thing to do. Secondly, using such hacked Mac OS X images means that updates from Apple, such as the latest Leopard 10.5.7 update, will definitely ruin your system.

However, ever since September last year, we have a new method, using a small boot CD called boot-132. If I understand it all correctly, it uses a modified Darwin kernel to bootstrap a regular, unaltered Mac OS X Leopard retail disc. Since Darwin is open source, this is completely legal, and doesn’t break the DMCA since you’re not actually hacking any protection measures. As soon as the regular retail disc is “running”, the installer pops up, allowing you to install Mac OS X as if you’re using any regular Macintosh. Once the installation is completed, you use the boot-132 CD to boot into the newly installed Leopard, and from there you install a bootloader (Chameleon) which enables you to boot without the CD.

This method has several advantages. I already named the DMCA advantage, but on top of that comes the fact that since you’re using an unaltered copy of Leopard, updates from Apple will install a lot more smoothly than when using a modified installation. Early on, this method was only viable when using hardware exactly the same as Apple uses, but soon after the boot-132 CD could be modified to include drivers for machines with more diverging hardware. Since writing drivers is not illegal, this also doesn’t break the DMCA: no actual hacking of Apple code involved.

Using the boot-132 method, I built myself a non-Apple Macintosh with a flick of the wrist. There were some small bumps along the road, but nothing show-stopping: I’m now enjoying a brand new Macintosh for less than 200 EUR. This computer isn’t actually a hackintosh, since no Apple code was hacked to get it running. It only runs Mac OS X; I haven’t installed any other operating systems on it.

The hardware used to build this Macintosh amounted to a total price of 199 EUR, ordered at my favourite Dutch online hardware retailer. The core of the system is a Foxconn barebone machine, the Foxconn L10-S3, which uses a slightly modified Intel Atom 330 mini-ITX motherboard (network and audio chip from Realtek).

This entire package cost 199.50 EUR here (excl. the DVD drive, I already owned that one), including shipping and 19% VAT. Note that you have to buy Mac OS X Leopard as well from retail! Using the boot-132 method, almost all of the hardware is supported. What is not supported are no deal breakers: the line-in doesn’t work (a different driver might solve that), you have to turn HyperThreading off (no support for HT on the Atom 330 in Mac OS X 10.5.7), and sleep doesn’t seem to work (some BIOS fiddling might solve that, though). For the rest, everything’s supported.

After you’ve ordered all the components from your favourite retailer, and assembled it, it’s time to start the guide. Let’s take a look at the pre-requisists first:

Updating to Mac OS 10.5.7 is relatively easy, but there are two very important steps.

Using OSx86Tools, there are some fun after-install things to do. They are not required, but fun nonetheless. Using OSx86Tools, you can change the processor and memory strings in “About This Mac” to properly describe the hardware in your machine. Since Leopard doesn’t include strings for this hardware, you need to add them yourself. This is skin-deep only; System Profiler won’t take it into account. The lack of these strings does not affect the utilisation of your hardware in any way, however.

That’s it! My small and lovely little (and cheap!) Atom 330 dual-core machine now runs Mac OS X Leopard 10.5.7 without breaking the DMCA or doing any difficult hacking. Updates apply just fine, and software installs and runs without any problems as well. Office 2008 (update to SP1 went fine as well), iLife ’08, Adium; they all work without any issues.

The boot-132 method is the holy grail of the OSx86 community. Apple can’t do anything about this, short of introducing special DRM chips in their machines. However, those will get cracked rather quickly, meaning it’ll only be a waste of money. The only possible problem here is the EULA, which forbids installing Mac OS X on hardware that is not “Apple-labeled”. I solved that issue by placing an actual apple on top of my machine, and I’ve got various Apple stickers here as well which could solve the problem in a more permanent fashion (I ate the apple…). 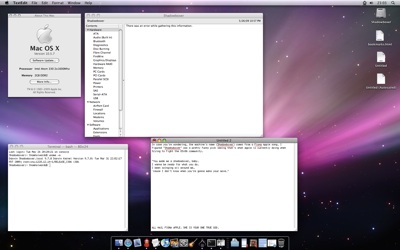 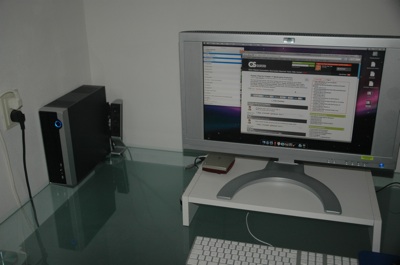 Rests me to say that this InsanelyMac forum thread contains a list of modified boot-132 discs and packages for all sorts of hardware. Feel free to check if yours is included!