The recently released 10.04 version of Ubuntu is the third Long Term Support (LTS) version Canonical has released. I installed this new version on four of my laptops (2 netbooks, 1 normal laptop, 1 portable desktop replacement), and here’s my impression of it.

The installation is much simpler and more to the point that ever before. I really liked the look and feel of it. In all cases, either installing from scratch (in 2 of my laptops), or upgrading (in the rest 2 of my laptops), everything worked perfectly. I remember back in the day when upgrades occasionally would break X11 etc, but not this time. The only setting that was not preserved was under my husband’s account: the “two finger scrolling” setting on the Synaptic mouse panel was reverted to “edge scrolling” after upgrading. No biggie.

Loading Ubuntu is now super-fast. It loads at around 10 seconds on my hard drive-based laptops, and in about 15 seconds on my SSD-based ones. The new login screen is beautiful and functional. Only thing I’d like added in that screen would be a battery life indicator.

Originally, I had a stability issue with a complete lockup, but after the first update packages hit the mirrors, the problem disappeared (I’m guessing that I was hitting the well-publicized Intel gfx driver issue). Since these updates, everything has been rock solid, and with a good performance.

Compared to older releases, this version requires more RAM. Two of my laptops have 512 MB of RAM (I will upgrade one of these to 1 GB, but not the other, because that netbook is too messy to open up), and while the system would start up using only about 130 MB of that RAM, by the moment I would use the package manager, it’d use up all that RAM, plus an additional 150 MB of swap. I also noticed that after having the machine used for a few days without a reboot, the RAM usage will go up little by little, as evident in my screenshot below. However, if you’re not using Open Office, or installing lots of packages, or having too many Firefox tabs open, 512 MB of RAM should be enough. I calculated that I’d need about 768 MB of RAM as a minimum for a more “involved” usage pattern. Since I’m preparing the 512 MB netbook for my mom, who she can’t use a computer yet (I’m hoping to teach her when I visit her soon), I think 512 MB will be enough for her. 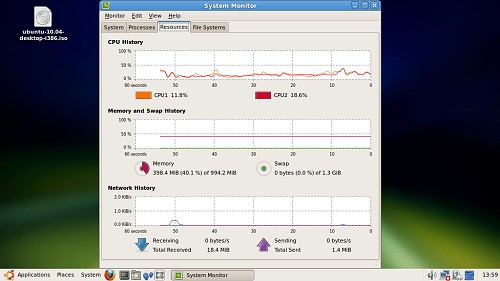 In terms of new features, there is a new dark theme, and new notification applets into play, which I thought they looked and functioned well. Canonical has done a lot of work reworking the look and functionality of their main applets, and this has paid of. Only gripe I have is that one of these indicator applets doesn’t let you remove the “mail” icon, so it takes up space on my netbook’s limited screen space for nothing — since I don’t use Evolution (I only use Gmail, online). And there’s no way to setup the mail notification just to get Gmail notifications (without the involvement of Evolution).

Other new features include the new Ubuntu music store, and Ubuntu One — features that I personally don’t have any use for. However, I was happy to see an updated Empathy client, and a new social application with support for Twitter and Facebook. I hope they add Buzz support soon too! Maybe some Google Voice integration via a new Ubuntu-sponsored VoIP server would be nice too! 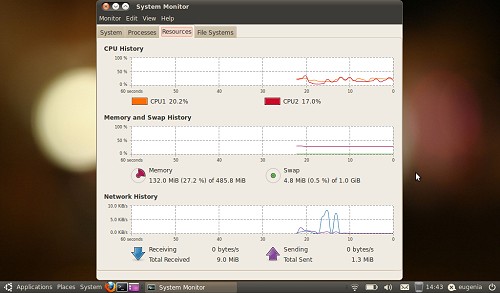 The only thing that really didn’t sit well with me was the removal of the “Menus & Toolbars” dialog. Ubuntu now has a default setting of “selective text besides icons”. You can’t change that, not even via gconf-editor (update: apparently it’s there, under the guise of “toolbar-style”). This is not a great idea for small screens, like my two netbooks, one of which has only a 1024×576 resolution (and please don’t direct me to “Ubuntu Netbook Remix” distro — not interested). I understand the need for defaults and ease of use, but this is one UI feature that is still needed.

Another new feature on Ubuntu is now the inclusion of the video editor PiTiVi. PiTiVi is my favorite Linux video editor in terms of usage simplicity. Unfortunately, just before the release of Ubuntu, they switched to a new way of rendering, that made the editor’s previewing 100 to 150 times slower (currently it’s software rendering only, hardware acceleration is planned for later in the year). Whereas in all the previous versions I was able to edit MPEG4-SP from 720p Kodak digicams *faster than real-time*, now I was left with about 1 frame per 2-3 seconds. This has made PiTiVi utterly useless to me [and my mom]. Its developers told me that they made these architectural changes in order to add features that required it, like transitions, fades, and what not. Speaking as a filmmaker, I prefer a cuts-only featureless video editor that is able to preview these cuts in real time, rather than adding a few more features that makes the editor so dog-slow that it doesn’t give me an overview of what I’m editing (making editing “blind”). There’s a saying among us filmmakers: “if you can’t do it with plain cuts, then you’re doing it wrong”.

On the bright side of things, suspend-to-RAM works perfectly across the board. Linux and Ubuntu have come a long way supporting all these different BIOS and offering a great experience with laptop sleep. In fact, my portable desktop replacement laptop was always problematic in terms of sleep, and required kernel patches. Not with this version, where everything worked out of the box!

The only thing that I had to manually add support for was for one of my Acer netbook. I had to download and put on my rc.local the “acerfand” service. Without it, the fan would never stop spinning, and that had a massive battery life impact (battery life down to 1:30 hours from the normal 2:30 hours). But again, in retrospect, that specific netbook used to require a lot of extra work after installing Ubuntu: from microphone drivers, wifi drivers, special secondary SDHC slot support, fan, etc etc. This time instead, all I had to do was to take care of the fan. Everything else worked out of the box.

As a conclusion, it is my opinion, that Ubuntu is by far the most usable Linux distribution, and for many people it’s perfect as a replacement to Windows and Mac OS X. Back in the day there were a lot of “but” when someone was suggesting Ubuntu as a complete replacement, but I think that the distro has come a long way, and delivers the goods.