A few days ago Sony released the 11th version of their consumer “Movie Studio HD Platinum” version of their popular PC video editing platform, Vegas. A variety of new features can be found in it, most importantly 3D stereoscopic editing support, and a faster h.264 decoder for AVCHD/digicam/dSLR footage.

Note: I have fully reviewed Vegas in the past here on OSNews, so this article will mostly talk about the new features, since the rest of the experience hasn’t really changed.

The biggest new feature is of course stereoscopic 3D support. 3D is not new in the filmmaking world, but many argue that this time is here to stay, and it has now invaded the consumer space as well. It was always relatively easy to shoot in 3D (just put two identical cameras next to each other on a dual tripod-head, and bang two stones together to help syncing in post), but editing the two resulting streams on a single timeline was never easy. Vegas now allows the user to “bind” together two streams, edit them as one, and watch the preview window in various 3D modes (e.g. anaglyph, half-half etc). Only disadvantage of this new feature is that the companion DVD Architect application wasn’t upgraded to a newer version, so it can’t burn 3D Blu-Ray disks, but rather a “baked” 3D look, e.g. red-cyan anaglyphs. 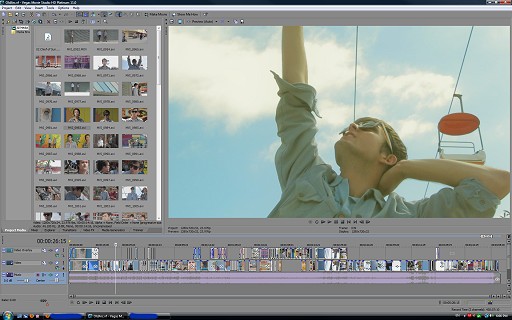 Editing the music video embedded below.

The other big new feature is the update of the h.264 decoder, which is now faster than in Vegas Platinum 10, and night-and-day vastly faster than on versions 7, 8, and 9. On my DELL laptop (1.3 Ghz i3 mobile CPU), 1080/24p footage from Canon’s digital cameras (e.g. the SX230 HS, dSLRs) were previewed in real time. AVCHD at 60i too. It’s interesting to note that unlike Adobe, Sony does not use special h.264 hardware acceleration for decoding (e.g. CUDA), but rather old-fashioned hand-optimized code, and whatever generic acceleration DirectX can provide.

The third most interesting feature is its fuller support for 24p. While older versions also supported 24p (for a long time Vegas was the only notable consumer editing app that supported 24p), the feature was unofficial, but now it’s been integrated better with various options in the editor, e.g. the timeline ruler’s time format.

Other interesting features include a new text/title plugin that offers more options than the standard text plugin, transport controls for the trimmer, and a new rendering UI for the various exporting codecs. Some new NewBlueFX plugins are bundled with the app too. Finally, rendering using the SonyAVC encoder now supports both nVidia CUDA and ATI OpenCL graphics cards for hardware accelerated encoding. In my tests though, with an nVidia card, the encoding time difference with and without acceleration was very small.

My music video for this indie band from Santa Cruz, Old Arc, was edited with Sony Vegas Platinum 11.
Video shot with the small Canon SX200 IS digicam (HD, h.264/MOV), handheld.

On the negative side, the application is still 32bit, so the app, or the SonyAVC encoder, sometimes crash when it needs more than 2 GB of RAM. There is a workaround, where you can “extend” the various executable files and DLLs of the app to make them use up to 3 GB of RAM, but no more than that. The hack seems to fix most crashing problems successfully.

There is also a bug with projects that use 5.1 audio: sometimes the project doesn’t reload. Hopefully, that’s a bug that Sony will fix with a free update, but we should note here that the previous version, v10, never saw any free update, even if it had its share of bugs (traditionally Sony always released Movie Studio updates, so that was a surprise for most). The Movie Studio community voiced their discomfort with this in the last few months, on the official forum.

Overall though, Vegas Platinum 11 is the most powerful consumer video editor in the market today. For those who don’t use complex masking or CGI, but rather create narrative videos (e.g. short movies, simple music videos, travel and family events), the app can fulfill most needs better than any other in its class. Usability is very modern and the app is overall easy to learn.

For the price ($95), the app not only competes with the $300 Apple FCP X, but it’s even better than it in most features. It also blows out of the water Adobe Premiere Elements 9 ($90), both in speed and features. In the past I’d suggest Vegas Pro, FCP or CS5 to users who are interested in filmmaking more than the average Joe is, but now the consumer Platinum 11 has enough features to stand on its own feet and offer the flexibility needed to create something professional-like.

FTC 16 CFR Part 255 Disclaimer
Sony Vegas Platinum 11 was sent to OSNews for free, and to keep, in return for the unbiased review. Sony had no influence or involvement in the article’s findings and opinions.